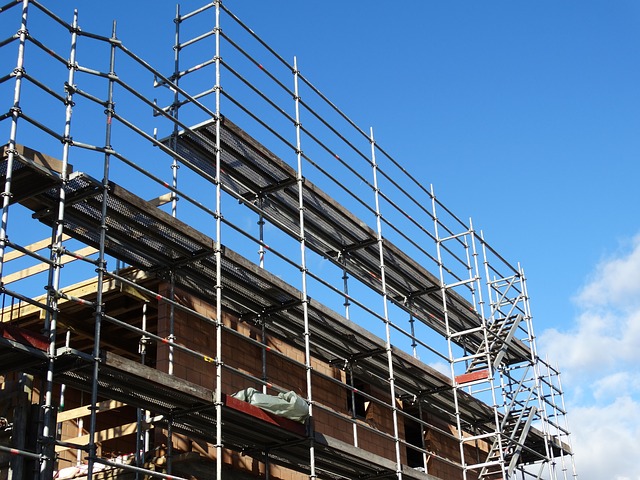 Scaffolding provides a temporary safe working platform for activities such as:

It is formed from individual tubes and joints or proprietary components.

There are two main types of scaffolding:

The most common piece of structure used in scaffolding is the scaffold tube (known as a standard). The tube generally comes in two thicknesses, 3.2 mm or 4 mm. The tubes are galvanised due to their exposure to the elements and axial capacity loads are given either ‘as new’ or ‘used.’ Capacities of tubes used in tension are usually limited by the safe slip load capacity of the coupler, which is far lower than the actual tensile resistance of the tube.

Scaffolding is designed for its self-weight, i.e. the weight of the boards, tubes, guardrails, toeboards, etc. and imposed loads such as wind. The imposed load applied to the scaffolding depends on its use.

The wind load applied to scaffolding will change depending on whether sheeting or debris nets are used. The magnitude of the wind load will alter the required capacity of the ties and may affect their frequency.

Workmanship and inspection is vital for the erection and dismantling of scaffolding and must be undertaken by competent personal under supervision.

For information about removing scaffolding, see How to remove scaffolding.

The National Access and Scaffolding Confederation (NASC) has published TG20:21, which provides the definitive guidance for scaffolding constructed with tube and fittings throughout the UK. TG20 comprises four elements; the Operational Guide, the Design Guide, the User Guide and the NASC’s innovative, user-friendly and widely-adopted eGuide software.

Up until March 2021, this bundle came only in the form of three hard copy guides and a digital download, and was titled TG20:13. TG20:13 was formally withdrawn, in favour of fully adopting TG20:21, on October 12 2021. Further information can be found here.

Through TG20:21 the guides and eGuide are now available online, with the improved and expanded software and the associated and updated Operational and Design Guides accessible via the NASC ePortal.

Retrieved from "https://www.designingbuildings.co.uk/wiki/Scaffolding"
Create an article