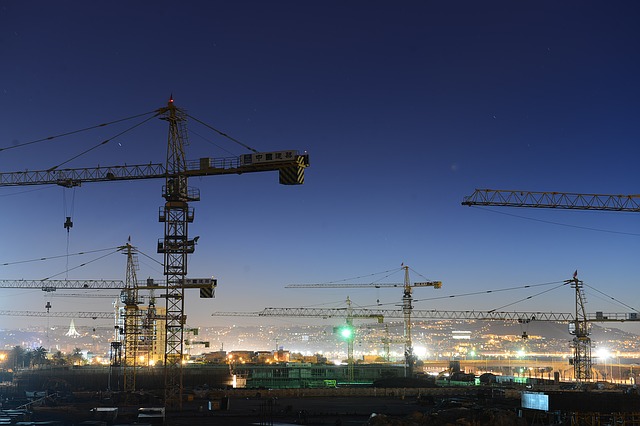 A wide range of different types of crane can be used on construction projects as a means for lifting and moving materials and other building elements from place to place. Cranes can range from a simple rope pulley to a tower crane fixed to the top of a skyscraper. The choice of crane for a particular site will depend a number of different factors, including:

Very broadly, cranes can be classified as: 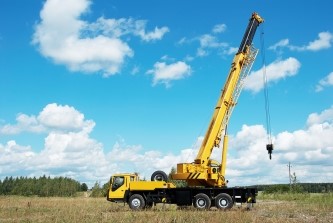 Mobile cranes can be moved within a site, giving them great flexibility. They can be either mobile wheeled, truck-mounted, track-mounted or gantry-based.

Mobile wheeled cranes are mounted on a wheeled chassis with stabilisers that can be used when lifting to prevent movement. Generally, crane is controlled and driven by an operator inside the cab. The slewing ring beneath the cab allows for a 360-degree turning circle, and the boom extends upwards supported by suspension ropes.

Truck-mounted cranes are mounted on a truck or lorry specially adapted to carry an increased load. The lorry can be driven from a front cab as a conventional vehicle, as well as having additional controls for a lattice mast or telescopic boom which extends in sections. Fly jib attachments can be used to increase lifting height.

As this type of crane is very transportable and has a short site preparation time they are commonly used for short hire periods.

Track-mounted cranes are mounted on a diesel powered crawler unit together with a lattice mast that can accommodate a fly jib attachment with additional lifting ropes to allow for better site coverage. They can move at low speed around sites but need to be transported to and rigged on the site.

The flexibility of this crane is its main advantage, as it can be adapted to act as a dragline with the addition of a winch drum at the front. The tracks allow for it to be operational on poor ground conditions. 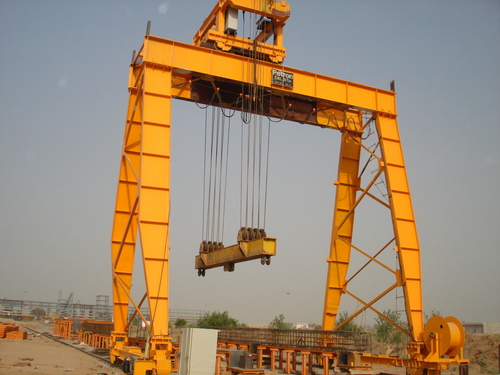 Also known as portal cranes, gantry cranes typically consist of two A frames connected by a lattice cross member which straddles the work area. The lifting gear is suspended from the horizontal cross member and can move along it on rails. On small gantry cranes, the A frame is wheel mounted, whereas larger cranes are mounted on powered bogies that run on rail tracks. Larger cranes tend to have the lifting gear mounted with a driving cab on the cross member.

This form of crane is commonly used for repetitive work on low to medium-rise developments, or in stock yards to move equipment and materials.

Despite having a similar appearance to the traditional tower cranes, static cranes differ in that the lattice mast is mounted on the slewing ring meaning that the whole tower rotates from one fixed position.

They are fitted with a luffing jib which can be raised through 90-degrees from horizontal, with a trolley and hoist block that can move along the length of the jib.

Static cranes tend to be used for low capacity lifting and are beneficial in that they tend to allow for a closer approach to the face of a building. 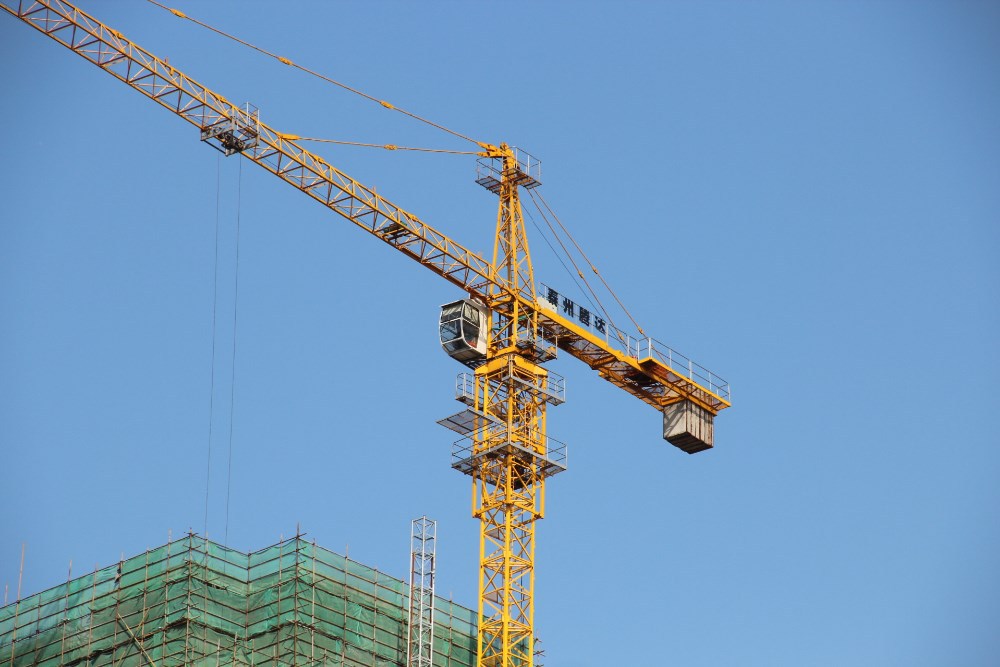 Tower cranes are a familiar sight on most construction projects. They are usually assembled and erected on-site with a horizontal or luffing jib. Common features of tower cranes include:

Tower crane operators are capable of seeing most of the lifting operations from the cab, although a banksman is required at ground level both for overseeing the loading of the crane and for issuing signals and guidance to the operator.

The tower (typically 30 m tall) is anchored at ground level using mass or reinforced concrete bases. Piles may be required if the ground conditions are poor. Lifting capacities range from 2.5 tonnes with the trolley at the minimum radius and 1 tonne at the maximum radius at the end of the jib. This type of tower crane is most appropriate on confined sites where there is not enough room for a travelling crane. 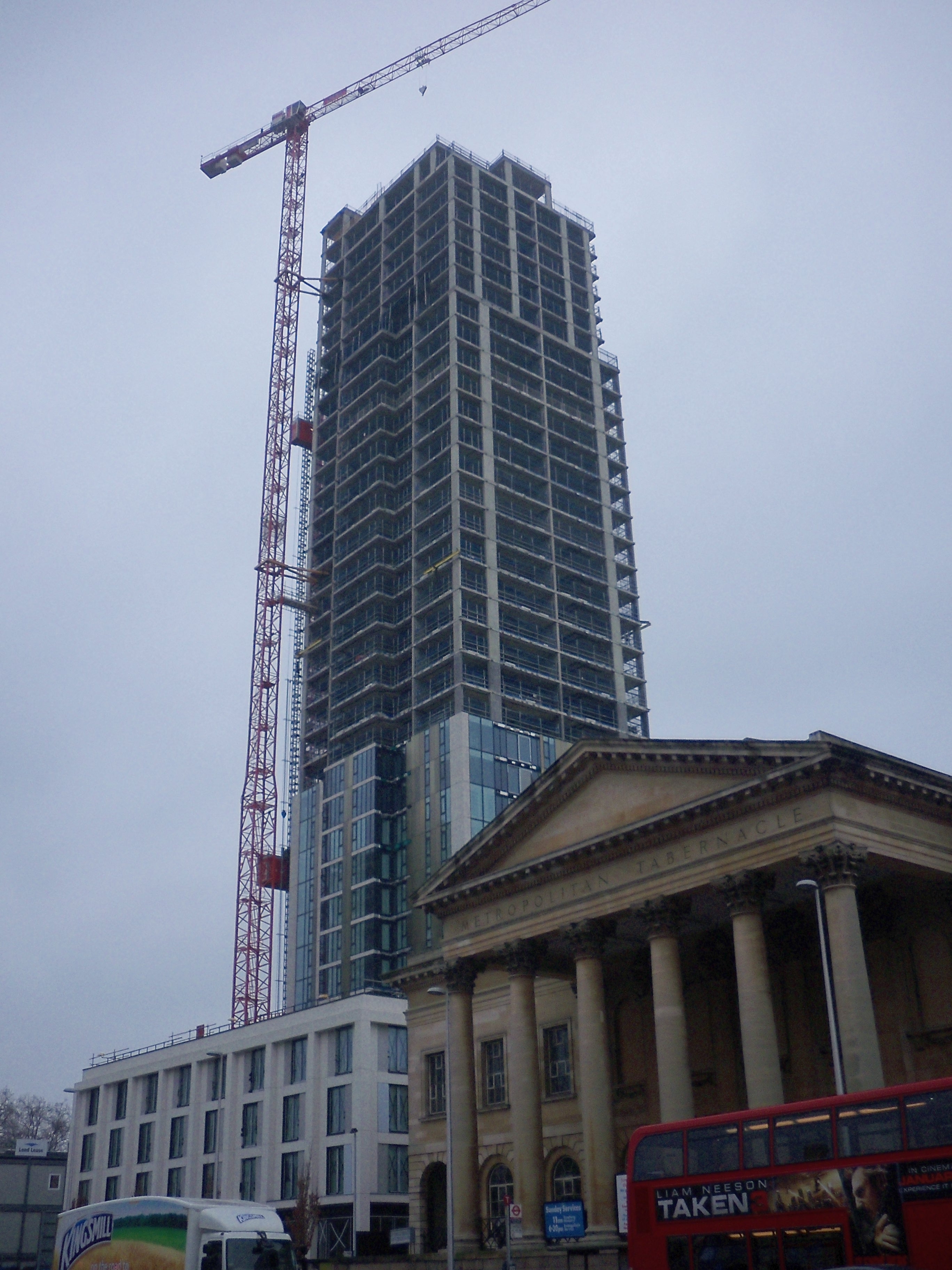 This is similar to a self-supporting tower crane but is used where high lifts are required. To gain additional stability, the tower is tied at suitable intervals to the face of the structure, from a minimum distance of 2 metres. This will induce additional stresses in the structure which must be accommodated in the design and this is likely to incur additional costs.

On sites that cannot accommodate static cranes, a travelling or rail-mounted tower crane may be the most suitable option. The tower is supported at the base by precast concrete ballast blocks placed evenly to both sides. This is then mounted on heavy-wheeled bogies that move along a rail track which is laid on sleepers and ballast. Traversing corners is possible by constructing radius rails or turntables. It is important that the track is not placed on a gradient more than 1 in 200, and that it is carefully monitored and maintained as any imperfections or slight movement could render the tower unstable.

The typical lifting capacities are 1 tonne at the maximum radius and 4 tonnes at the minimum radius.

Climbing tower cranes are suitable for structures that are particularly tall. The tower is erected within the structure and raised as the structure itself becomes higher during the construction process.

Typically, the crane is fixed to a base and raised two storeys at a time or after floors have been cast and cured. After the first four floors are in position, self-adjusting wedges and collars are fixed to the floor around the tower to transfer its load to the floors, thereby helping with stability. Once work is complete, the crane is dismantled in sections. The decision to use a climbing tower crane must be taken carefully, since frames or collars will need to be designed to suit the structure in question, and the structure must be capable of supporting the required loads.

You can read about the various regulations and safety considerations that apply to the use of cranes on construction sites here.