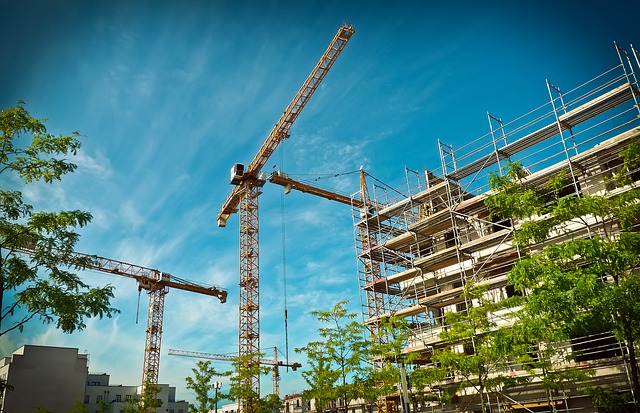 Scaffolding is typically formed from simple, repeating systems of tubes, joints and boards that provide a temporary safe working platform for activities such as; construction, maintenance, repair, access, inspection and so on.

There are two main types of scaffolding:

More detailed descriptions of a range of scaffold types are set out below.

Also known as a bricklayer’s scaffold, a putlog scaffold consists of an outer row of vertical members (standards) joined together by ledgers fixed with right-angle couplers. These support the transverse transoms (or putlogs) which are built into the brickwork bed joints as work proceeds. This type of scaffold is only suitable for new work in bricks or blocks.

This consists of two rows of standards with each row being joined together with ledgers. The ledgers support the transverse transoms. The scaffold is erected independent from the building but is tied to it at suitable intervals. The inner row should be set as close as is practicable to the building. A base plate is provided for each row of standards.

A working platform is a close-boarded or plated level surface from which work can be carried out. It must provide a safe working space of sufficient strength to support the loads of operatives and materials. All working platforms that are erected above ground level must be fitted with a toe board and guard rail.

This is a type of independent scaffold which is typically used for interior work in large buildings such as halls, churches, museums, and so on. It is generally only used for one level, typically to provide easy access to ceilings and soffits. It consists of parallel rows of standards connected by ledgers in both directions and supporting a single working platform.

This type of scaffold is suspended from the main structure in one position using wire ropes or steel chains. It is similar to birdcage scaffold but has the advantage of leaving a clear space beneath the platform. This makes it a suitable scaffold for buildings such as theatres, cinemas, spaces that are to remain operational, and so on.

This type of scaffold consists of a working platform which is suspended from the top of a structure by cantilever beams or outriggers which are capable of raising and lowering the platform. In this way, access can be gained for light maintenance work, window washing, and so on. It is common for high-rise buildings to be fitted with a permanent cradle system at roof level for this purpose.

This is a type of independent scaffold which is erected on cantilever beams and secured to a building at only one end. The other side is left hanging or exposed. This type of scaffold is efficient in that it provides access to areas that would be difficult or uneconomic to reach using a scaffold system erected from ground level. Workers operating on cantilever scaffold systems must be fitted with safety harnesses.

Also known as a mobile tower scaffold, this type of scaffold is assembled from pre-formed framing components and fitted with wheels which allow it to be rolled from one place to another. It is typically used on sites where multiple areas require access for light maintenance work, or where a traditional scaffold would have to cover too great a distance to be practical.