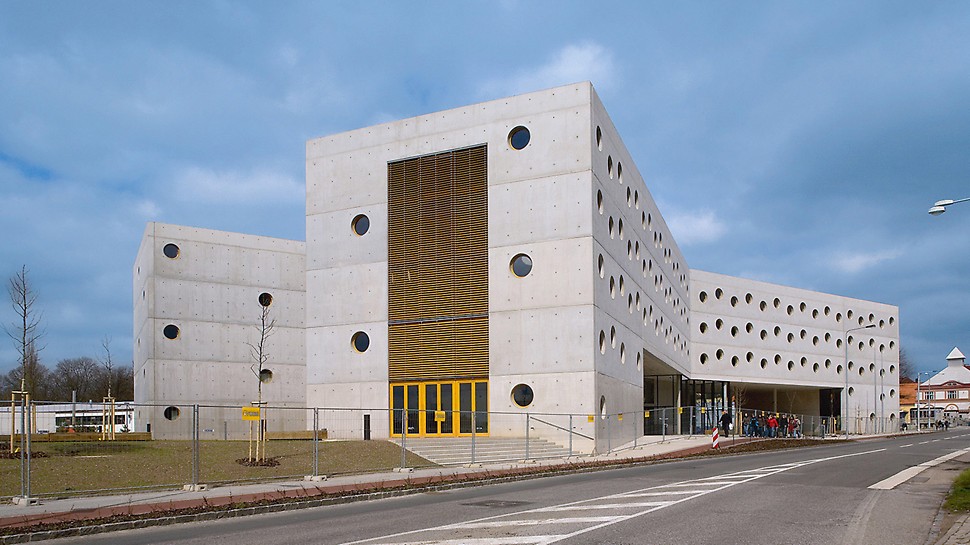 Whether it is at breathtaking heights or through extreme forms and structures - the visions of architects for the realisation of museums, concert halls, stadiums or bridges place the highest possible demands on the construction industry around the world.

In many cases, architectural concrete is the modern solution, whether it is for civil engineering, economic or aesthetic reasons.

Through the design capabilities of the fresh concrete, virtually any shape and quality can be economically realised with the help of appropriate formwork systems and formlining.

The creation of architectural concrete as a design element is influenced by the following:

The development of the building material concrete with new concrete types such as high-strength, lightly-compacted and self-compacting concretes as well as fibre-reinforced concretes (steel and textile fibres) opens up further areas of application.

For the planning and execution of structures and structural components with special concrete surface requirements, the coordinated co-operation of all parties involved is essential. The expectations and requirements of the planners and clients must correspond to that which can be realised in the actual execution.

On the other, the number of possible uses on the construction site is multiplied whereby amortisation costs of the equipment used - related to a building project - are reduced. At the same time, using system formwork is much safer for the construction team.

With the use of formwork systems for architectural concrete surfaces, the quality of the formwork is to be taken into consideration. Panel formwork is mainly used as the rental formwork supplied by the rental parks. Here, the individual formwork elements have different utilisation rates and can also feature repaired areas.

In traffic route construction - for example, bridges, tunnels or retaining walls - architectural concrete is regarded as an important design element.

These concrete surfaces are often observed only from a distance or vehicles driving past at speed. In order to create optical accents, clear design elements therefore must be selected. For example, formwork panel joints or those joints resulting from working phases, must be distinctly formed.

However, it is important to note that many components of these structures are mainly exposed to the direct influences of the weather. This means they undergo a rapid ageing process and, in the course of time, also greatly change their appearance.

Today, around 70% of building companies use panel formwork in order to construct concrete walls. The name is derived from the peripheral frame which protects the edges of the fitted formlining against mechanical wear and stress. As a result, the panel joints leave a typical impression on the concrete surface. In addition, the steel or aluminium frames are used for installation of the formwork anchors and also serve for accommodating the formwork couplers and moving devices.

The grid arrangement of the standard panels and formwork ties varies between 2.7 m and 3.5 m, and the individual panels can be connected with each other either vertically or horizontally. Panel formwork is robust, long-lasting and easy to use due to its pre-determined assembly arrangement.

Girder formwork is used much less today than was previously the case, and mostly for special applications. Its name is derived from the wooden or metal formwork girders that are used. Main beams, steel waling and freely-selectable formlining form prefabricated formwork elements, the so-called formwork sections. The steel walers connect the system and also serve as support surfaces for the anchoring system.

The grid arrangement of the standard elements and formwork ties can vary. They can differentiated as:

Curved walls can be constructed polygonally in the form of a polygon with panel formwork through inserted trapezoidal cover strips. Circular wall areas are formed with special girder formwork systems with which the required radius is achieved by means of adjustable spindles connecting the single waler sections.

Bending radii are continuously possible from 1 m to approx. 20 m. The curvature of the formlining is achieved through special profiled timber - cut to match the curvature radius - which is inserted between the formlining and girder position.

Likewise as for girder formwork systems for walls, slab formwork is made out of wooden or metal girders. It stands out through its flexible range of applications.

Slab tables, which are normally used to form large slab areas, consist of the same system components. Through the large-sized formlining surfaces, the number of panel joints is reduced and facilitates a concrete finish which fully meets higher requirements.

With slabs, the quality of the concrete surface can vary for different reasons. This includes panel impressions caused by the panel layout of the formwork system being used. Likewise the quality, arrangement and size of the individual sheets of the freely selected formlining influences the concrete quality.

Column or support formwork is mostly a derivation of panel or girder formwork. As a result, the special features are very similar. In order to be able to fulfil the required quality standard for supports and columns, the correct choice of formwork system also has to be selected here.

Depending on the requirements of the column cross-section, the finish of the edges or the concrete surface, panel and girder formwork are used.

Through the use of extraordinary structural forms, owners and architects frequently set visual accents in the construction of cultural buildings or for prestigious structures which feature very demanding building requirements. These so-called 3D free-form surfaces can hardly be realised with conventional formworking methods.

Furthermore, there is the fact that most of the remaining visible surfaces are to be constructed in the highest quality and with sharp edges. For these extravagant building structures, an individual customised formwork concept must be realised in each case.

This formwork concept is developed on the basis of a three-dimensional building model provided by the formwork manufacturer. It consists of statically supporting basic elements and form-giving 3D formwork units. The individual elements are easily joined together on the construction site and then positioned with the help of measuring points, auxiliary axes and erection aids. On-site utilisation takes place similar to that of systemised formwork.

Through the selection of the formlining, a large number of design possibilities for the concrete surface structure are possible. In the process, the formlining determines the surface character of the concrete - independent of any subsequent processing or treatment.

The person writing the tender documents must have detailed knowledge of the formlining together with the material properties, coatings and processing as well as the interaction with the release agent and the fresh concrete, and take this into account during the planning.

The specifications of the concrete surface must be well-defined so that the contractor can take into consideration all aspects relevant to the materials and applications without any risk when selecting the formlining to be used. Furthermore, he must be able to assess the feasibility and to point out any expected tolerances and fluctuations in the results.

Four formlining factors which have a decisive influence on the concrete surface:

Today's structural designs and building methods allow the realisation of impressive architectural concepts. In this respect, we would like to present a number of projects featuring a wide range of variants.

For many years, architects have re-discovered the potential of architectural concrete in building construction and to use it as an important design element. Parallel to the development of building materials and process technologies, the requirements have also risen quite significantly.

High-strength as well as liquefied through to self-compacting concretes facilitate the realisation of more slender concrete constructions along with more diversified forms. Curved and inclined walls and slabs are a frequently featured design element. The formwork construction industry has adapted itself to the situation accordingly. The desire for achieving smooth, joint-free concrete surfaces as far as possible can be satisfied with the range of available large-sized formlining.

Components in the protected inner areas are not exposed to weathering, therefore the aging process of these concrete surfaces takes place substantially more slowly. Concrete surfaces on the inside areas of a building are viewed at very short distances. Therefore, details will become considerably more accentuated.

As a result, the planning architects together with the building contractor should define what is feasible in order to achieve the required architectural concrete finish. Otherwise excessive demands and rectification work will cause inadequate and unsatisfactory results.

Particularly in the area of cultural buildings, architects and project planners prefer architectural concrete as a means of design. Apart from artistic requirements regarding the visibly remaining concrete surfaces, the special forms of the complete structures or individual components also frequently dominate proceedings.

During the formwork planning attention should be paid to ensure a neat joint and tie pattern as well as an orderly arrangement of the formwork elements. This is because the panel joints and tie pattern along with the formation of the tie points are substantial design elements in architectural concrete.

In order to achieve a uniform finish of the concrete surface, special attention must be paid when selecting the type of concrete to be used and the entire processing technology of the concrete including any subsequent treatment. If increased requirements are placed on the appearance of the concrete surfaces, it is advisable that new formlining is installed in the formwork. If required, the anchor pattern can be supplemented with blind anchors to form a neat symmetrical arrangement.

This article was originally published here by PERI Group.

Retrieved from "https://www.designingbuildings.co.uk/wiki/Architectural_concrete"
Create an article