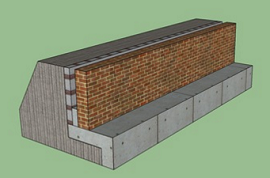 Retaining walls are vertical or near-vertical structures designed to retain material on one side, preventing it from collapsing or slipping or preventing erosion. They provide support to terrain where the soil’s angle of repose is exceeded and it would otherwise collapse into a more natural form. The principal characteristic of a retaining wall is being able to withstand the pressure exerted by the retained material, which is usually soil.

Retaining walls may include a parapet that extends above the height of the retained material, often for safety reasons.

The main uses of retaining walls are to help prevent soil erosion, create usable beds out of steep terrain and to provide decorative or functional landscaping features. They may be independent structures, or may be part of a wider construction works, such as a building.

Planning permission is required if the wall is to be over 1-metre high and next to a road or pathway; or over 2-metres high elsewhere. Independent, freestanding retaining walls may not require building regulation approval; however, any structures must be structurally sound and well maintained.

According to the Deputy Director of the Building Regulations and Standards Division at DCLG, “Where they consider that a building or structure, or part of it, is in such a state or is used to carry such loads as to be dangerous, local authorities have powers under sections 77 and 78 of the Building Act 1984 to take action to remove danger to the public. The exercise of such action may be appropriate for freestanding boundary and retaining walls that present a danger.” Ref Construction and maintenance of boundary and retaining walls, 13 May 2013.

Where a retaining wall is near to a boundary, it may be subject to the provisions of the Party Wall Act, and may be required to continue a right of support.

There are three types of earth pressure that bear upon the movement of the wall, that were investigated by Terzaghi in 1929:

Water can also build up behind retaining walls, increasing the pressure on them, and so they may include weep holes or some other form of drainage. Accumulating water can also reduce the stability of retained soil, and the friction between the retaining wall base and the soil beneath it.

There a wide variety of types of retaining wall: 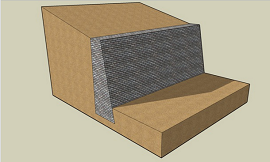 This type of wall depends on its mass to retain the material behind it and remain stable. Stone, concrete and brick masonry are the most common materials used in this type of wall construction. To maintain stability, the mass and friction of the interlocking wall materials must be greater than the force of the material being retained. Gravity walls might be suitable for heights of up to 2 to 3m

To better resisting pressure gravity retaining walls may have a ‘battered’ profile, (that is one face is sloping so that the wall is thicker at the bottom than the top. Either the face or the back of the wall may be battered. Very broadly, the base should be half to three-quarters of the wall’s height.

This type of wall can be made of timber, interlocking steel or vinyl panels, that have been driven into the ground up to the required depth and fixed in place by soil on either side at the base. These are most commonly used where the soil is soft and the space available is restricted. As a general rule, there is usually 1/3 of the pile above ground and 2/3 below ground. The piles must resist the bending forces induced by the retained material.

Concrete pile walls can be used to create permanent or temporary retaining walls. They are formed by placing piles directly adjacent to one another. These can be; closely-spaced contiguous pile walls, or interlocking secant walls, which depending on the composition of the secondary intermediate piles can be hard/soft, hard/firm or hard/hard secant walls.

The stability of reinforced concrete and masonry walls can be increased by reinforcement bars.

Cantilever retaining walls, made of steel-reinforced or cast-in-place concrete, are connected to a slab foundation (in the shape of an inverted ‘T’ or ‘L’) which allows horizontal pressures from behind the wall to be converted to vertical pressures on the ground below.

Counterfort buttresses, spaced at equal distances along the wall can be used to create the structural path between the vertical wall and the horizontal base. These are typically used for walls with heights greater than 8-12 m.

Mechnically stabilised earth (MSE) walls are walls that can tolerate some differential movement. The wall face is infilled with granular soil whilst retaining the backfill soil. The advantage of MSE walls is the ease of construction, as they do not require formwork or curing.

The use of soil nailing in MSE walls, involves introducing slender steel reinforcing bars to the soil, placed parallel to one another on a slight incline and grouted into place.

Anchored earth walls include cables or rods anchored in the rock or soil behind the wall. Concrete is injected at the end of the rod to bind it into the soil. This method can be used where high loads are to be expected. 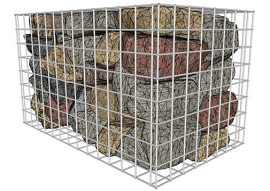 Gabions are cages, baskets or boxes typically made of wire, filled with earth, sand, crushed rock and so on. They may be woven, or welded. As they are free-draining retaining structures they are frequently used where water will be present, such as along coastal roads and as flood defences.

Where timber, steel or concrete cages or boxes are interlocking, this may be described as a crib wall.

Green retaining walls can be used to retain more gentle slopes. A geocellular structure such as a series of ‘honeycomb’ cells can be embedded into the surface of the slope to stabilise it, and the individual cells can then be planted.

A barrette retaining wall is constructed from reinforced concrete columns of a rectangular plan form with the long axis in the direction of retention.

Retrieved from "https://www.designingbuildings.co.uk/wiki/Retaining_walls"
Create an article