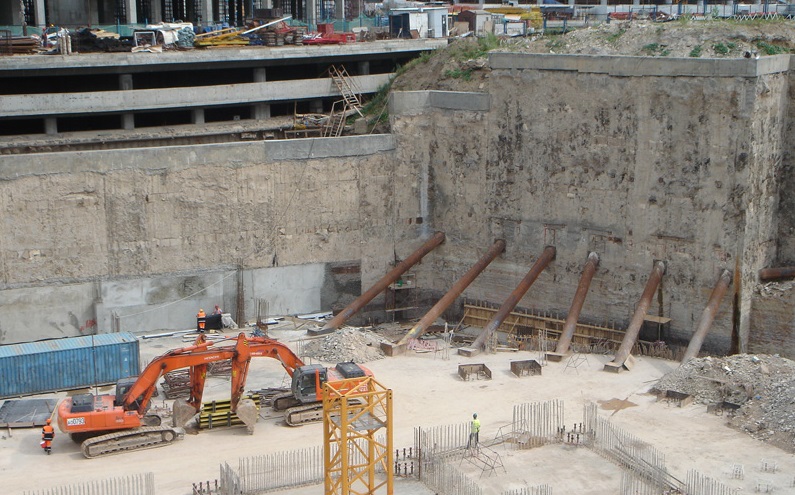 A diaphragm wall is a structural concrete wall constructed in a deep trench excavation, either cast in situ or using precast concrete components. Diaphragms walls are often used on congested sites, close to existing structures, where there is restricted headroom, or where the excavation is of a depth that would otherwise require the removal of much greater volumes of soil to provide stable battered slopes.

Diaphragm walls are suitable for most subsoils and their installation generates only a small amount of vibration and noise, which increases their suitability for works carried out close to existing structures. In addition, floor slab connections and recessed formwork can be incorporated into the walls.

The walls generally range in thickness from 500 - 1,500 mm and can be excavated to depths of over 50 m. Excavation is typically carried out using rope-suspended mechanical or hydraulically-operated grabs. Specific ground conditions or greater depths may require the use of hydromills – hydraulically-operated reverse circulation trench cutters – to penetrate into hard rock by ‘cutting’ rather than ‘digging’. Hydromills can achieve depths of up to 80 m.

The excavation stability is maintained by the use of a drilling fluid, usually a bentonite slurry. This is a controlled mixture that has thixotropic properties, meaning that it exerts a pressure in excess of the earth and hydrostatic pressures on the sides of the excavation. The walls are constructed, using reinforced or unreinforced concrete, in discrete panel lengths generally ranging between 2.5 - 7 m. Purpose-made stop ends can be used to form the joints between adjacent panels, with a water bar incorporated across the joints. More complicated arrangements such as ‘L’ or ‘T’-shaped panels can be constructed where additional bending moment capacity or wall stiffness is required.

Precast concrete diaphragm walls have the same advantages but are less flexible in terms of design. The units are installed in a trench filled with a special mixture of bentonite and cement with a retarder added to control the setting time. Ground anchors are used to tie the panels or posts to the retained earth to provide stability.

The high cost of diaphragm walls can make them uneconomic unless they can be incorporated into part of a building structure. As such, they are suited for deep basements, underground car parks and rail stations, tunnel approaches, underpasses, deep shafts for tunnel ventilation, pumping stations, and so on.

Understanding the advantages and disadvantages of ground water control in reference to this method would be interesting.