The term 'cladding' refers to components that are attached to the primary structure of a building to form non-structural, external surfaces. This is as opposed to buildings in which the external surfaces are formed by structural elements, such as masonry walls, or applied surfaces such as render.

A rainscreen (sometimes referred to as a ‘drained and ventilated’ or ‘pressure-equalised’ façade) is part of a double-wall construction that can be used to form the exterior walls of buildings.

Rainscreen cladding systems were first investigated in the 1940s. They were first used in practice in the 1950s and became more commonplace in the 1960s.

The Centre for Window and Cladding Technology (CWCT) defines a rainscreen cladding system as '...a wall comprising an outer skin of panels and an airtight insulated backing wall separated by a ventilated cavity. Some water may penetrate into the cavity but the rainscreen is intended to provide protection from direct rain'. 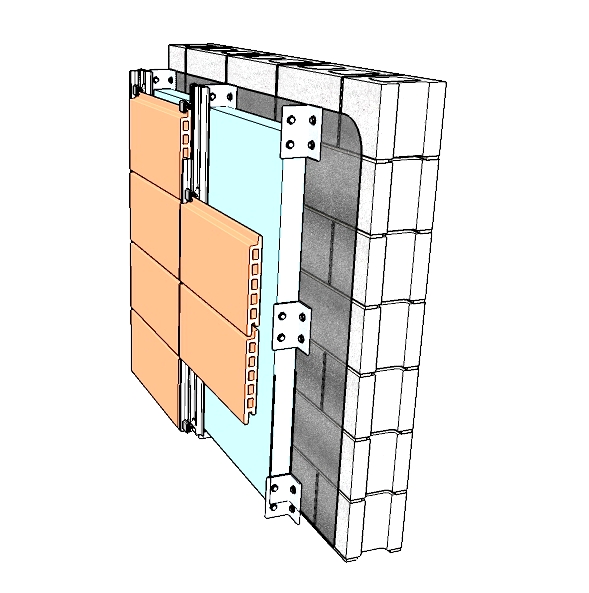 There are two basic types of rainscreen:

The difference between the two systems relates to how much water can penetrate the joints, with drained and ventilated systems allowing more water to penetrate. However, the definitions are relatively vague, and the distinction has become somewhat blurred.

Rainscreen cladding can be fabricated from metal sheeting such as aluminium, stainless steel, zinc, copper and so on, or can be a formed from metal composite materials (MCM) which consist of two skins of metal (such as aluminium, or ACM) bonded to either side of a lightweight core such as polyethylene (PE) or polyurethane (PUR), a profiled metal core or a mineral core. Other materials, such as terracotta, brick slips, stone, timber and so on are also used.

Rainscreens are generally cost-effective, lightweight, and easy to install, maintain and replace. Some systems are simply ‘clicked’ onto supporting rails without the need for additional fixings. They can be used on new-build and refurbishment projects.

Retrieved from "https://www.designingbuildings.co.uk/wiki/Rainscreen"
Create an article