Trombe walls use a combination of thermal mass and glazing to collect and store solar radiation so that it can be used to heat buildings. The broad idea was patented by Edward Morse in 1881, but it was named after French engineer Felix Trombe, who along with architect Jacques Michel used trombe walls as an architectural component in the 1960’s.

A thermally massive wall with good solar absorption characteristics (perhaps with a matt, dark-coloured surface) is orientated facing towards the direction of the sun. The wall is constructed behind a glazed façade that protects it from external conditions. There is generally a space between the glazing and the wall. This space can be very narrow, just sufficient to allow air movement between the glazing and the wall and to provide access for cleaning, or it can be large enough to be habitable.

Heat built up in the wall is slowly released into adjacent spaces by radiation and convection. Depending on the thermal mass of the wall, this heat can be released over long periods of time, moderating fluctuations in conditions. This is a form of ‘passive’ solar heating, as opposed to an ‘active’ building services heating system. 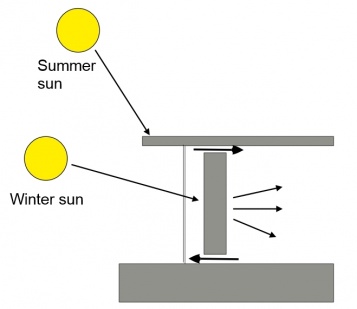 The design of trombe walls needs to enable them to provide solar heating during colder periods, but not to generate overheating during warmer periods. This might require the use of external vents, shading or overhanging eaves to limit peak gains and to enable night time cooling.

Typically the wall will be 20-40 cm thick, made out of high heat capacity materials such as masonry or concrete (or even containers filled with water), with the absorbed heat taking up to 10 hours to conduct to the interior.

The efficiency of trombe walls can be improved by the use of double glazing with a low-e coating to reduce heat losses to the outside. Low-e coatings reduce the effective emissivity of the surface of glass so that it reflects, rather than absorbs, a higher proportion of long-wave infra-red radiation. Ideally, the glazing should have exterior insulation, shutters or blinds to prevent heat loss during the night.

Retrieved from "https://www.designingbuildings.co.uk/wiki/Trombe_wall"
Create an article