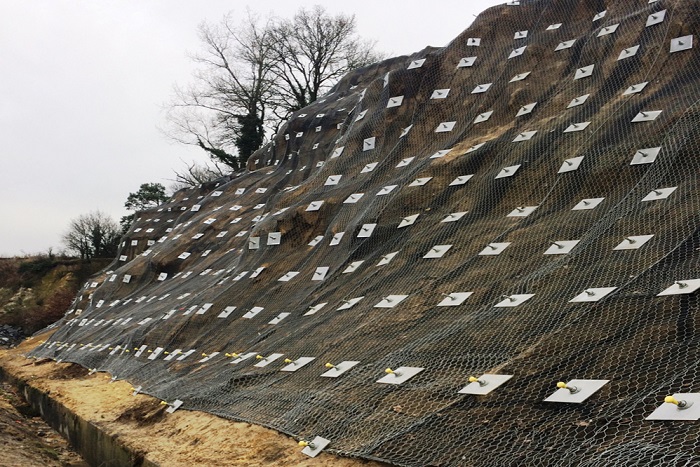 Soil nailing is a ground stabilisation technique that can be used on either natural or excavated slopes. It involves drilling holes for steel bars to be inserted into a slope face which are then grouted in place. Mesh is attached to the bar ends to hold the slope face in position.

They are commonly used as a remedial measure to stabilise embankments, levees, and so on. Other applications for soil nailing include:

The main considerations for deciding whether soil nailing will be appropriate include; the ground conditions, the suitability of other systems, such as ground anchors, geosynthetic materials, and so on and cost.

Although soil nails are versatile and can be used for a variety of soil types and conditions, it is preferable that the soil should be capable of standing – without supports – to a height of 1-2 m for no less than 2 days when cut vertical or near-vertical.

Soils which are particularly suited to soil nailing include clays, clayey silts, silty clays, sandy clays, glacial soils, sandy silts, sand, gravels. Soil nailing can be used on weathered rock as long as the weathering is even (i.e. without any weakness planes) throughout the rock.

Soils which are not well-suited to soil nailing include those with a high groundwater table, cohesion-less soils, soft fine-grained soils, highly-corrosive soils, loess, loose granular soils, and ground exposed to repeated freeze-thaw action.

Design considerations that will inform the design include:

A drainage system may be inserted once all the nails are in place. This involves a synthetic drainage mat placed vertically between the nail heads, which extends to the wall base and is connected to a footing drain.

Some of the advantages of using soil nailing include:

Limitations of using soil nailing include:

Retrieved from "https://www.designingbuildings.co.uk/wiki/Soil_nailing"
Create an article