Nails are a basic type of fastener and have been used in construction in some form for at least 3,000 years. They are most commonly used for joining pieces of timber or for fastening materials to timber and are suitable when a screw is unnecessary.

There are a very wide variety of nails designed for specific purposes and finishes. They are manufactured in different lengths and gauges (diameters), as required.

Nails are usually hammered into place by striking them squarely on their head. By driving the nail in this way, it is less likely to bend or break. When driving a nail into timber, it is good practice to position the nail at a slight angle to the grain of the timber so that it does not split. When timber is likely to split, or a nail is required close to an edge, it may be necessary to drill a ‘pilot hole’ which is slightly smaller than the nail diameter.

Nails must be of suitable strength, with a shank that is long enough to provide an appropriate attachment. Nails are held in place by friction, and some designs can include roughened, grooved or twisted shanks to improve the hold.

Nails are most commonly made of steel. Steel wire is fed into a machine which cuts out individual nail lengths. Wire pieces are held by grippers while a hammer flattens one projecting end to form the head. It is then cut to the specific length and point. Masonry nails are made of hardened zinc for added strength, and many nails (particularly roofing nails) are galvanized with an outer layer of zinc to prevent rusting.

When purchasing nails, it is important to note that suppliers normally sell them by weight rather than quantity. This means that a rough estimate of how many are required is sufficient and over-buying is generally recommended.

While nails may vary between manufacturers, the most common types include: 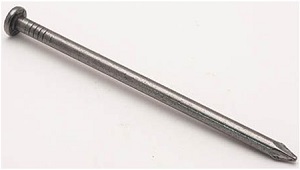 Also known as round head, these are the most widely-used type of nail for joining timber and other elements, particularly where a rougher finish is acceptable. It is good practice to use nails that are at least three times longer than the depth of the thinner material that is being nailed.

A variation is the oval head nail which is oval in cross-section and minimises the risk of splitting the timber. 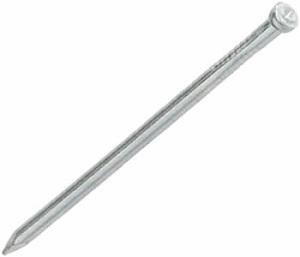 These are similar to common nails but have much smaller heads which sit flush with the timber surface and provide a neater finish. A nail set can be used to recess the head to conceal it completely. This capability means that they are often used in furniture and decorative or exposed timber. The smaller head sizes also mean there is a reduced risk of the timber splitting. Finishing nails can be made of brass to provide a decorative detail. 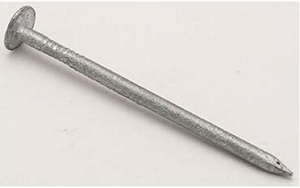 Box nails are commonly used for light construction as they are slightly thinner than common nails and have less strength. 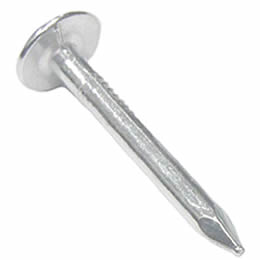 These have larger heads and are often used for nailing shingles, attaching asphalt and other roofing purposes. The thin material is held in place and prevented from tearing loose by the large head. Smaller varieties can be used to attach roofing felt. They are typically galvanized to prevent rust. 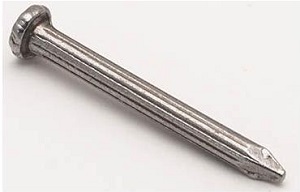 These are harder and thicker nails with small heads, typically made of hardened zinc which is stronger, enabling them to be driven into masonry surfaces effectively. They are often used to attach timber to stone or brick. 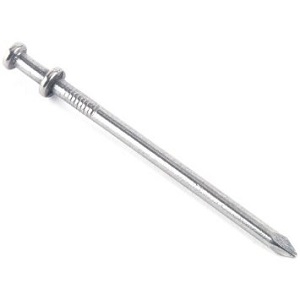 These nails are often used to secure scaffolding and other temporary structures in place. They have two heads, one above the other. They are driven in as far as the first head, while the top head remains above the surface, making it easy to remove. 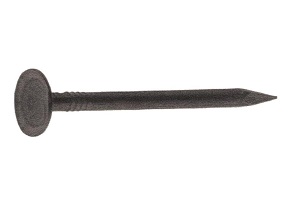 Drywall nails are used to hang drywall and are designed not to cut the paper face. 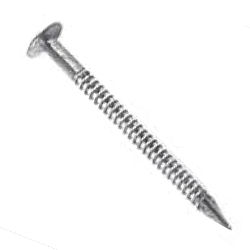 These are similar to common nails but comprise rings along the length of the shank. This provides better grip in the timber and a more secure attachment.

Special types of nails include:

Retrieved from "https://www.designingbuildings.co.uk/wiki/Types_of_nails"
Create an article