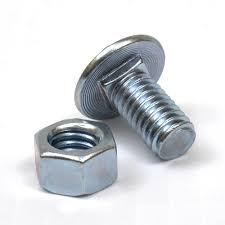 A bolt is a type of fastener, usually made from metal, that commonly comprises a head at one end, a chamfer at the other, and a shaft characterised by an external helical ridge known as a ‘thread’. Bolts are typically used to hold materials or objects together, or to position objects.

The chamfer at the opposite end of the head provides a slightly bevelled edge which helps with inserting the bolt into holes and nuts. Bolts typically (but not always) require a nut which is applied via torque while the bolt is held in place (or vice versa). Vibration or dynamic loads may loosen nuts, necessitating the use of locknuts, lock washers or thread lockers which can provide resistance to loosening.

The terms ‘bolts’ and ‘screws’ are sometimes used interchangeably, and the distinction between them can be complex, however, in simple terms, a bolt passes through the materials it is fixing together (typically into a nut at the other side), whereas a screw threads directly into them.

Bolts are often made of steel, and where resistance is required to weather or corrosion, they may be galvanised, or stainless steel, brass, zinc or titanium may be used.

There are many different varieties of bolt which can be selected based on the particular requirement or the materials involved. Some of the most common types include:

Usually embedded in concrete or masonry for structural applications.

Used to fasten metal to timber, with a squared undercut to the head which holds the bolt in place once it has been tightened.

Commonly used in conveyor systems, an elevator bolt has a flat, plain or countersunk head which holds the bolt in place when tightened.

Also known as frame bolts, this type of bolt distributes the bearing load using a washer on the undercut of the head.

This type of bolt comprises two threaded ends instead of having a head, one of which contains a wood screw.

A hexagon bolt comprises a head that has six sides, with threading that begins part-way down the shank, whereas a tap bolt’s shank is threaded the whole length.

A proprietary bolt in which the pin and collar are swaged together using a specialist tool to form a permanent fixing.

Also known as lag screws, this is a heavy-duty fastener that creates its own mating thread in timber and other soft materials when tightened.

This type of bolt has a short shank and is intended for assembling metal components through predrilled holes.

This type of bolt is commonly used in construction tools and other devices due to its durability, and is characterised by its flat countersunk head and square shank neck.

Rather than requiring a nut, the shank of sex bolts are covered with a ‘mating’ female component. These are useful for fastening components that cannot be exposed to abrasive threads.

This is similar to a machine bolt in that it has a short shank, in addition to a four-sided bolt head.

This type of bolt has hexagon nuts on both ends. Components are fastened between the two bolts.

Bolts that are meant for use with large timber components.

Has a T-shaped head which can be gripped by a wench and can fit into a slot with ease.

This type of bolt has an expanding wing-like nut which helps it to mount objects to walls.

Similar to staples, U-bolts are bent in the shape of a ‘U’ and are partially threaded on both ends.

Different types of head include:

Thanks for the article.

Images of each bolt would have really helped.