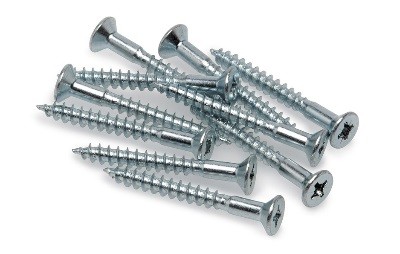 For nails, see Types of nails.

A screw is a type of fastener, usually made from metal, that commonly comprises a head at one end, and a point at the other, and a shaft shaped so that it can be turned into another material. The shape of the shaft is characterised by a helical ridge which is known as a ‘male thread’ (where the thread is external) or ‘female thread’ (where the thread is internal). Screws are typically used to hold materials or objects together, or to position objects.

Tools such as screwdrivers are commonly used to insert screws, and the majority are tightened by clockwise rotation.

The terms ‘screws’ and ‘bolts’ are sometimes used interchangeably, however, in simple terms, a bolt passes through a material and into a nut on the other side to bolt items together, whereas a screw threads directly into a material.

Both screws and bolts are often made of steel, and where resistance is required to weather or corrosion, they may be galvanised, or stainless steel, brass, zinc or titanium may be used.

There are many different varieties of screw which are selected based on the particular requirement or the materials involved. Some of the most common types include:

Typically designed with a partially-unthreaded shank and used to attach pieces of timber together.

Stainless or carbon steel and used for fastening materials to concrete.

Often have a blue coating and are inserted to a pilot hole in masonry.

Have two pointed ends and no head. Often used for making hidden joints between two pieces of timber.

Smooth, round or mushroom-headed with a reduced diameter shank.

Often coated with black phosphate and designed with a bugle head. Used to attach drywall to timber or metal studs.

A looped head designed to be used as an attachment point. Also used for attaching wires across building surfaces.

Longer screws which are used for fastening down deck boards.

Often wax-coated and used for fastening down chipboard flooring.

Designed with a decorative dome or other cover to conceal the head.

Designed with two threads which enable it to driven twice as fast.

Designed with a head that is impossible to reverse, making it suitable for security applications.

Different types of heads include:

Retrieved from "https://www.designingbuildings.co.uk/wiki/Types_of_screws"
Create an article