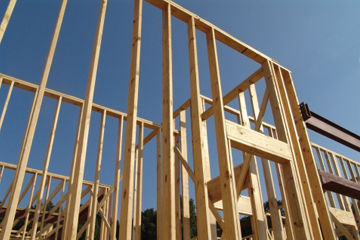 A stud is a vertical framing member which forms part of a wall or partition. Also known as wall studs, they are a fundamental component of frame construction and are typically made of timber. However, steel studs are increasingly popular, particularly for non load-bearing walls and firewalls.

Studs may carry vertical structural loads, or as part of a partition wall, may be non load-bearing. They are typically sandwiched between top and bottom plates and equally spaced. The spacings will be governed by the size and spanning ability of the facing or cladding material.

Load-bearing walls typically use a double top plate. A single top plate may sometimes be used if the rafters, trusses or joists bearing down on it are directly over the studs.

Traditionally, studs were fastened to the plates by hammer and nail, and then by nail gun. Modern techniques such as screw fasteners, clips and ties can be used to enhance resistance to wind and seismic activity.

Timber studs are easy to use, lightweight, adaptable, and can be clad and infilled with a variety of materials to give different finishes and properties. They should be of prepared or planed material to ensure that the wall is of constant thickness with parallel faces. Care must be taken to ensure that timber studs are completely dry when installed, otherwise they may be prone to shrinking and twisting as they dry out. To ensure they do not become damp, they should be stored carefully on site before usage.

Studs an also hold in place windows, doors, insulation, interior finish, utilities, and so on. In order to form interior and exterior corners, intersecting walls, headers, jambs and sills, studs can be bundled together.

There are different names for studs used to frame window and door openings. These include:

Retrieved from "https://www.designingbuildings.co.uk/wiki/Stud"
Create an article