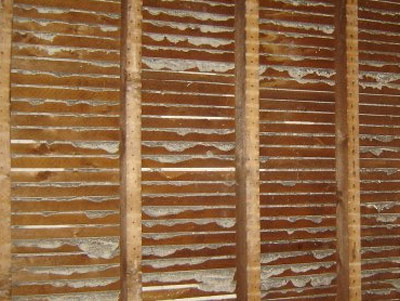 Lathing is the process of creating laths, which in traditional construction are parallel timber strips spaced apart to form the backing for another building component. They are usually nailed to timber uprights. The term derives from ‘plaster and lath’, where the laths were used as a support for wet plaster.

In Medieval housebuilding, wattle (as in ‘wattle and daub’ construction) comprised a lattice of wooden strips which was used as a backing for the daub – typically mud plaster. This can be seen as an early form of lathing.

‘Plaster and lath’ is frequently found in the internal partitions of Georgian, Victorian and Edwardian houses, and also in their ceilings. Typically, the timber laths are around 25mm wide by 6mm thick, and are positioned about 6mm apart to allow the plaster to penetrate into the gaps.

‘Lath and plaster’ was used right up to the early 20th century; but its use has now totally diminished due to the expense of wood, the labour needed and the time required for fixing. More importantly, the introduction of plasterboard offered a quick, direct and sturdy fixing to studs, thereby obviating the need for lathing.

Lathing today is mainly metal, comprising a diamond-pattern mesh of galvanised steel that is called expanded metal lath (EML). It is usually fixed with clout nails to the studs of timber partitions so that the long dimensions of the elongated ‘diamonds’ run horizontally. During fixing, the EML is made as taut as possible by nailing first in the centre and then stretching outwards before fixing at other points. The elongated diamond shape is regarded as being optimal as it best absorbs energy and resists deformation after being installed.

EML lathing can also be fixed to concrete blocks and bricks to form a backing for external render and stucco, and also for asphalt upstands. It is also used for wall reinforcement and to control cracking in brickwork and concrete.

Retrieved from "https://www.designingbuildings.co.uk/wiki/Lathing"
Create an article