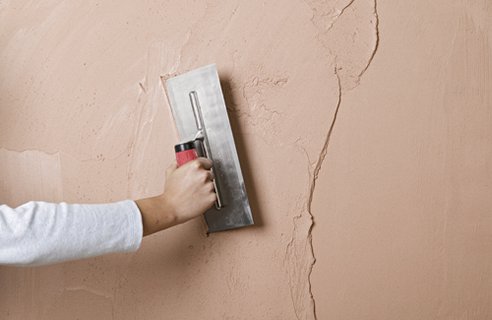 Plaster is a building material used for coating, protecting and decorating internal walls and ceilings. It can also be used to create architectural mouldings such as ceiling roses, cornices, corbels, and so on.

The most common types of plaster are a composition of gypsum, lime or cement with water and sand. The plaster is typically manufactured as a dry powder and then worked to form a stiff paste by mixing in water before application.

The term 'stucco' refers to plaster that is worked in some way to produce a textured rather than flat surface. See Stucco for more information.

Render is similar to plaster, but is applied to the outside of buildings and has waterproofing properties. See Rendering for more information.

A form of plastering was used by primitive civilisations, creating durable and weather-resistant structures using mud. The Egyptian pyramids contain plasterwork comparable to that used today that remains hard and durable some 4,000 years later.

Greek artisans used plaster, mainly to cover the exterior of temples but sometimes also interiors. Through history, plaster ceilings became increasingly ornamental, with those during the Tudor period being particularly extravagant.

However, the use of plaster as a means of demonstrating artistic skill and expression had waned by the 19th century, when imitation and mechanical reproduction displaced it as a creative medium. However, plaster is still very commonly used as a surface finish for interior walls, ceilings, and still sometimes for exterior walls.

[edit] Types of plaster by binder

There are a number of different types of plaster, depending on the binder that is used.

Gypsum plaster, or ‘plaster of Paris’ (POP), is the most common form of plaster for interior walls. It is produced by heating gypsum to around 150°C (300 °F). When mixed with water, the dry plaster powder re-forms into gypsum. Unmodified plaster starts to set about 10 minutes after mixing, but it will not be fully set until 72 hours have elapsed. Gypsum plaster has good fire-resistant qualities.

Lime plaster is a composite of calcium hydroxide (lime) and sand (or other inert fillers). It may sometimes be strengthened with animal hair to preventing cracking and reduce shrinkage. The plaster sets through contact with carbon dioxide in the atmosphere which transforms the calcium hydroxide into calcium carbonate (limestone). It is typically more flexible and breathable than gypsum and cement plasters, and is most commonly used on older properties.

Cement plaster is a mixture of sand, cement and water. It is normally applied to masonry interiors and exteriors. While it is capable of achieving a smooth surface, interiors will sometimes require an additional finishing layer of gypsum plaster. Cement plaster offers greater moisture resistance than gypsum plaster.

Clay plaster is considered to be a more sustainable alternative to modern plasters, with a lower embodied energy than gypsum, cement or lime based plasters. It is available with fibre additives to increase its strength, and in a range of ‘natural’ colours. It is breathable and does not need to be painted.

[edit] Types of plaster by application

Plasters can also be categorised by application:

Plaster is typically built up in layers, with the number of layers depending on the roughness of the surface being plastered. Rough, bare walls could require three coats of plaster, while plasterboard might just require a finishing skim of 2 to 3mm.

The plaster compound, which is typically supplied dry, must first be mixed with water, with care being taken to achieve the correct creamy consistency. Mixing is best achieved by adding the plaster to the water, not the other way round.

The plaster can then be applied to the wall. The first coat is applied, scratched and left to dry. This is followed by the second coat and finally a third finishing layer.

Plastering is a labour intensive and time-consuming process and as a result it has gone into something of a decline in recent years, with techniques such as dry lining gaining in popularity.

While plaster is durable, it can be prone to cracking if the building experiences settlement or if it has been applied incorrectly.