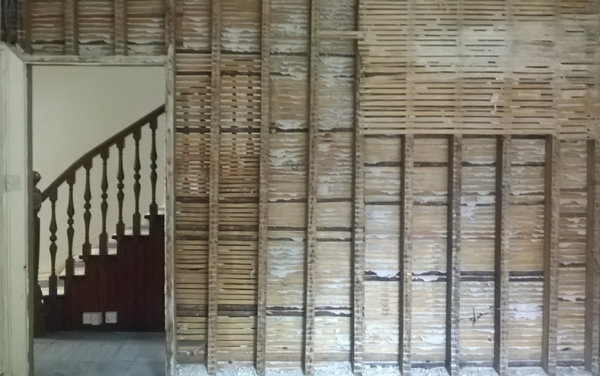 Lath and plaster is a technique which was used to finish interior walls and ceilings from the early-18th until the early-to-mid-20th century. It was then generally superseded by drywall techniques and plasterboard.

The process involved laths (thin strips of timber) nailed to timber joists or posts and then covered with built-up layers of plaster. Laths typically measure 25 mm x 6 mm, and are positioned about 6 mm apart from each other to allow the plaster to penetrate into the gaps between them.

Typically three coats of plaster would then be applied:

The first and second layers typically used a 1:3 lime putty to clean, sharp sand mixture. Animal hair was often added to assist with binding. The mixture for the third layer was usually a 3:1 lime putty to fine sand mixture or lime putty on its own.

As time went on, gypsum or cement was added which helped to reduce the setting time between layers.

The advantage of using lath was that it allowed for ornamental or decorative shapes, and could provide sound insulation and fire resistant properties.

However, it was a skilled craft and was a time-consuming activity and so was largely replaced by the use of pre-manufactured plasterboard towards the middle of the 20th century.

Retrieved from "https://www.designingbuildings.co.uk/wiki/Lath_and_plaster"
Create an article

The daylighting and ventilation opportunities of new rooflight solutions.

Prone to noise and drafts, this flooring method can have some benefits.