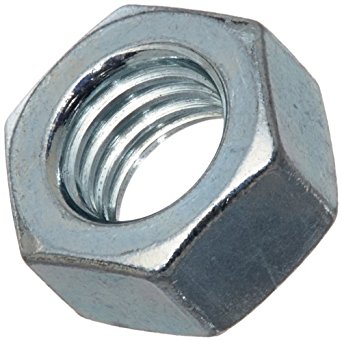 A nut is a fastener that consists of a block with a threaded hole in the centre. The hole contains ‘female’ threads that typically correspond to the ‘male’ threads of a bolt or screw. Nuts are used with their ‘mating’ bolt or screw to fasten materials together.

The most common shape for a nut is hexagonal, as six sides provide more angles for a tool to approach from, although the corners can be more vulnerable to becoming rounded off over time which makes them less easy to use with tools. Square nuts can also be used but are less common.

Vibration or rotation can have the effect of loosening a nut over time and so different locking mechanisms can be used, including:

Nuts are used for many different applications and so there are a wide variety of different types. Some of these include:

Retrieved from "https://www.designingbuildings.co.uk/wiki/Types_of_nuts"
Create an article