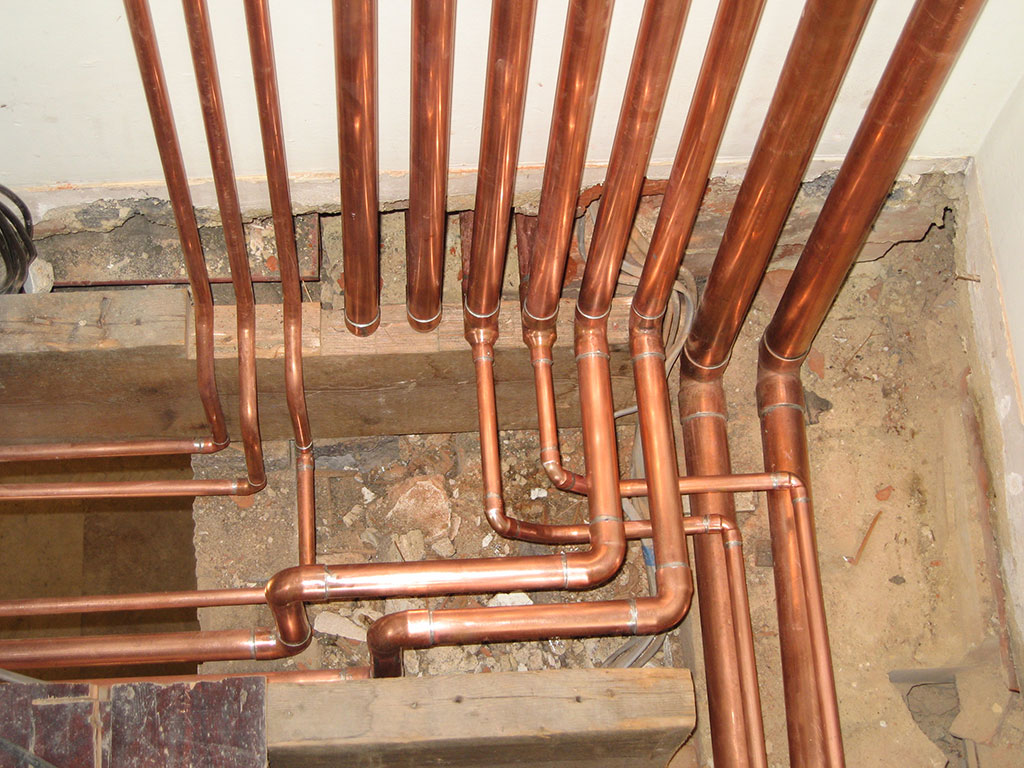 Pipework, also known as piping, is a system of pipes that is used to convey fluids. Careful design must ensure the integrity of pipework, with adherence to various considerations and principles.

Approved document B of the building regulations suggest that pipes: '...includes pipe fittings and accessories. The definition of ‘pipe’ excludes a flue pipe and a pipe used for ventilating purposes, other than a ventilating pipe for an above-ground drainage
system.'

National standards such as ASME B31 Code for Pressure Piping or BS 1560 Circular Flanges for Pipes, Valves and Fittings are used as requirements for the manufacture of pipes and piping components.

Many different components comprise pipework, including pipes, supports, gaskets, flanges, bolts, valves, strainers, flexible and expansion joints. These are used to sense and control the pressure, flow rate and temperature of the conveyed fluid and the system is usually documented in piping and instrumentation diagrams (P&IDs).

Pipework is commonly manufactured using carbon fibre and stainless steel, although non-metallic and lined or plastic pipework can also be used, including wood, fibreglass, aluminium, copper and concrete. The material selection should consider the variation in process conditions that may occur, such as the change in material strength at elevated temperatures.

Since fluid flow can result in corrosion and erosion, it is good practice for pipework to use materials which corrode slowly at a known rate.

When designing pipework, the operation of the system needs to be clearly understood. This means that normal conditions must be assessed, as well as those that arise during start up, shut down and at times of process disruption, which may include the following:

The point of leakage is typically at pipe joints and as a result, the number of joints should be minimised as much as is practicable. Permanent welding of joints can be undertaken for high integrity pipework systems or reformable types used, such as flanged, screwed or compression fittings. It is common for radiography and ultrasonics to be used as a means of assessing high integrity welds.

Safe access for operation, inspection and maintenance should be taken into account when designing pipework routing. Sufficient mechanical strength for the exerted loads should be provided by pipe supports and bridges.

Valves are used to isolate process equipment, both for maintenance and emergency purposes. Careful consideration should be taken, since liquid can be trapped between closed valves and undergo thermal expansion and loss of containment.

A familiar pipework system is domestic plumbing, which conveys water and fuels to houses, as well as removing waste in the form of sewage.

Where there are solid floors, high level feed pipes with fall pipes can feed single or adjacent radiators. Alternatively, pipework can be installed between the joists of a suspended ceiling, although if each floor is a separate dwelling this will not be practicable.

Another alternative is to run feed pipes around the top of the wall just below the ceiling with fall pipes. This is preferable to feeding pipes at floor level since doorways create issues, although this can be countered by taking the pipes up over the door or down into the floor.

Pipework installed in a loft or attic should be insulated, and where the circulating pipework is above radiators, bleed valves should be included so as to allow the release of any air in the system.

The basic arrangements for the pipework are as follows:

This involves a single loop of pipework running from and returning to the boiler. As heated water is pumped along the pipe, it rises into the radiator via natural convection, while displacing cooler water back into the pipe.

This is a more efficient system than the single pipe loop, and involves heated water being pumped to one side of each radiator in the system, while the other side is connected to a separate common return pipe. This means that each radiator receives water at more or less the same temperature.

This system uses normal pipework for pumping water from the boiler to manifolds, and back to the boiler. From each manifold, smaller diameter pipework is connected to the radiators, with runs generally kept below 5 m. The benefit of this system is that smaller pipes contain less water, which means less heat is lost along each pipe run.