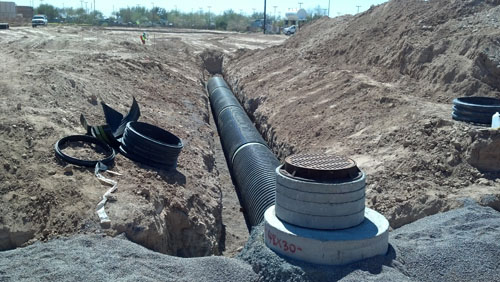 Sewerage (the sewer system), is the underground networks of pipes that carries sewage (waste water and excrement), waste water and surface water run-off, from buildings to treatment facilities or disposal points.

A sewer is; 'A pipe or channel taking domestic foul and/or surface water from buildings and associated paths and hardstandings from two or more curtilages and having proper outfall' Ref The SuDS Manual (C753), published by CIRIA in 2015.

Types of sewer include:

There are a number of ways of moving the contents of sewers:

A sewerage undertaker is: 'A collective term relating to the statutory undertaking of water companies that are responsible for sewerage and sewage disposal, including surface water from roofs and yards of premises.' Ref The SuDS Manual.

Retrieved from "https://www.designingbuildings.co.uk/wiki/Sewerage"
Create an article