Sustainable urban drainage systems (SUDS) are systems designed to efficiently manage the drainage of surface water in the urban environment.

Sustainable urban drainage systems can provide an alternative to, or addition to, traditional drainage systems where surface water is drained directly and quickly into underground, piped drainage.

As population has increased, particularly in urban areas, and ‘soft’, permeable landscape has been replaced with hard surfaces, surface water runoff has reached traditional piped drainage faster and in larger quantities. This has been exacerbated by the loss of rural features that might once have slowed the passage of surface water, being replaced with large, intensively farmed fields that rapidly discharge surface water into piped drainage or waterways that make their way into urban areas.

The result has been higher peak flows resulting in serious flooding of urban areas, pollution, damage to habitat and contamination of groundwater sources.

Sustainable urban drainage systems aim to mimic 'natural' drainage by adopting techniques to deal with surface water runoff locally, through collection, storage, and cleaning before allowing it to be released slowly back into the environment.

According to CIRIA, ‘SUDS techniques seek to capture, use, delay or absorb rainwater, rather than reject it as a nuisance or problem. Sustainable drainage delivers multiple benefits. As well as delivering high quality drainage whilst supporting areas to cope better with severe rainfall, SuDS can also improve the quality of life in developments and urban spaces by making them more vibrant, visually attractive, sustainable and resilient to change by improving urban air quality, regulating building temperatures, reducing noise and delivering recreation and education opportunities.’ 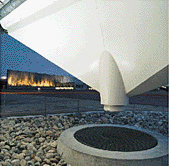 The benefits of sustainable urban drainage systems can include:

Sustainable urban drainage systems should be considered during the site selection process. Different management strategies may be required for different parts of a site, and flows from roofs should also be considered.

Sustainable urban drainage systems are likely to become even more important as population increases, water resources are put under increasing pressure, and the impact of climate change is felt.

In February 2019, The Association of SuDS Authorities (ASA) was launched to promote the use of SuDS in property developments.

In October 2012, Schedule 3 of the Flood and Water Management Act 2010 came into force. This created the power to require the inclusion of sustainable drainage of surface water in developments that need planning approval or have drainage implications. It removed the automatic right, established by the Water Industry Act, to connect to public sewers and instead gave powers to local authorities as SUDS Approving Bodies (SAB’s) to approve new drainage systems and their connection to public sewers.

It was intended that sustainable drainage systems would be assessed relative to a new national standard that would address the way drainage systems are designed, constructed, maintained and operated, considering run-off destination, peak flow rates, volume and water quality.

The requirements of Schedule 3 were intended to be phased in over 3 years. Initially only major developments would have to submit sustainable drainage proposals for approval, but from October 2015 all developments of more than one house would need to seek approval.

However, in December 2014, the government announced that from April 6 2014, planning authorities would be given authority for approving SuDS on developments, not SuDS Approving Bodies. In addition it was announced that a threshold of 10 dwellings or more, or equivalent non-residential or mixed development will apply. See SuDS consultation for more information.

On 13 November 2015, CIRIA published The SuDS Manual (C753) which it described as the most comprehensive industry SuDS guidance available in the UK Intended to support uptake, manage floods and create better places and spaces. It deals with the planning, design, construction, operation and maintenance of SuDS. Its publication followed a ministerial statement made by the Secretary of State for Communities and Local Government earlier in 2015 which made it clear that SuDS must play a greater role in the planning system, and that it is a requirement in new major developments wherever appropriate.

Retrieved from "https://www.designingbuildings.co.uk/wiki/Sustainable_urban_drainage_systems_SUDS"
Create an article