Floods occur naturally throughout the world as events ranging from annual occurrences to random natural disasters. More often than not the term disaster is denoted in response to flooding of the built environment where it poses a risk to life, homes and livelihood. With the correct understanding, and appropriate planning the adverse effects of flooding of the built environment can be reduced.

The characteristics of flooding that need to be understood include:

Understanding these characteristics will determine the investment of resources necessary to mitigate the effects of flooding.

[edit] The causes of floods

As population has increased, particularly in urban areas, and ‘soft’, permeable landscape has been replaced with hard surfaces, surface water runoff has reached traditional piped drainage faster and in larger quantities. This has been exacerbated by the loss of rural features that might once have slowed the passage of surface water, being replaced with large, intensively farmed fields that rapidly discharge surface water into piped drainage or waterways that make their way into urban areas.

The result has been higher peak flows resulting in serious flooding of urban areas, pollution, damage to habitat and contamination of groundwater sources.

Real-time environmental monitoring is invaluable in assessing meteorological conditions. By identifying severe weather patterns, flood warnings can be given days in advance. Continuing improvements in resolution and timeliness of forecasts will further improve warnings.

In addition, the Environment Agency (EA) undertakes surveys to evaluate the flood risk of particular areas. With greater resolution, this flood risk becomes better defined, in particular in relation to surface water flooding in urban areas. However, urban flooding is complex issue, and even catchments that are very close to one another can be affected in dramatically different ways.

Natural variations in weather patterns are being exacerbated by human activity, particularly the release of green house gases which are trapping solar energy, with an unpredictable effect on climate. Understanding climate change can help inform planning decisions.

UK Climate Projections (UKCP) is a methodology developed by the Met Office based on scientists understanding of the climate system and how it will change in future. UKCP09 summarises the most recent projections for the United Kingdom and is of particular relevance to planning flood defences as it enables investment in flood management schemes to be planned based on the best available information .

However, predicting the outcome of climate change is an uncertain and iterative process, no one model can provide a definitive answer. Furthermore, climate change is more complex than just global warming, and trends in precipitation for example are extremely difficult to predict. It is clear that the storm profiles and frequencies are increasing, but the methods of estimating extremes are not so well established.

The continued drive for global socioeconomic growth exposes more individuals to the consequences of flooding.

The opportunity to lessen the impact of flooding is greatest during the planning stages for new developments or infrastructure. Infrastructure asset managers need to ensure that adequate protection is given whilst at the same time minimising whole-life costs and maximising environmental gain. This requires a comprehensive overview of entire catchment areas.

This is best demonstrated through consideration of a case study, examining how precipitation affects a catchment and what planned measures can be used to manage flooding:

Ottery St. Mary is a small market town in East Devon with historic problems of flooding due to the steep local topography. Homes and businesses in the town are susceptible to persistent flooding.

In October 2008 a hailstorm lasting an exceptional 2 hours fell upon the catchment and there was 160mm of precipitation within a 3 hour period. Flooding reached 1.5m in some areas and there was an estimated £1 million of damage.

An overview of the situation can be seen in figure 3.1 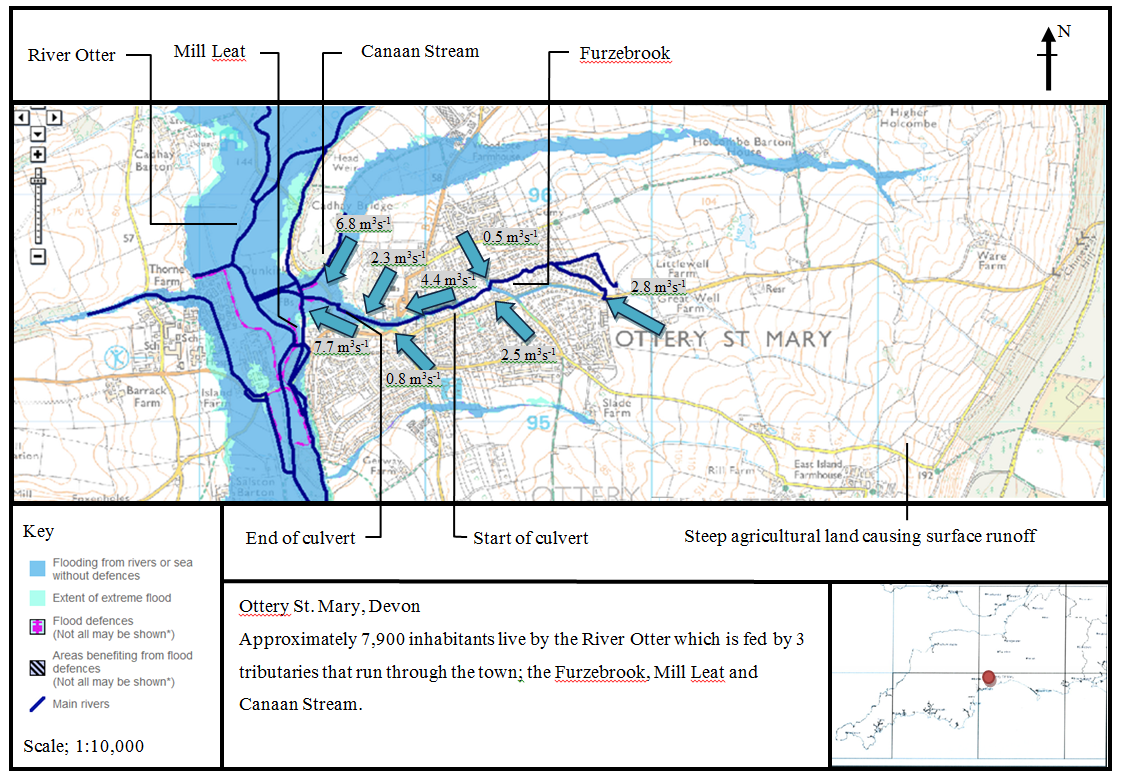 Furzebrook is the cause of much of the flooding, flowing in a small open channel through a steep catchment of grade 2 agricultural land. Surface runoff ensues and the channel overflows onto roads that then act as watercourses. The flow is culverted for 545m under the town centre before it discharges into the Mill Leat. Due to cross sectional changes in the culvert it has insufficient capacity to cope with even moderate return period flows.

The proposal considers all aspects of the catchment, individually and as a whole. By isolating elements it may be possible to avoid over-engineering and provide flood defence for a lower cost. Some fo the key alternatives are presented below.

A comprehensive damage model has been applied to every property under risk. The option of flood defence is said to act under three conditions; ideal, conservative and intermediate. Each with a different level of success. They can then be compared to the benchmark model, the damage sustained from no intervention. This gives the damage avoided due to the protection of the scheme i.e. the benefit.

The total life cost of the scheme is then divided by the aforementioned benefit giving a ratio, which if it is greater than 1, then the scheme is an asset to the community.

Option Q satisfies these conditions and so is the proposed scheme.

There are a number of criticisms:

Globally, the trend has been to shift flood prevention to a more managerial role, reducing reliance on physical flood defence schemes; implementing strategies to mitigate flood prone areas and increase their resilience to flooding, rather than continually adapting, strengthening and extending conventional defences.

This is done by considering:

CFMP’s are reviewed every 6 years and use river models to estimate increased flows by 2100.

Ottery has been determined as a policy number 4) catchment requiring further action to keep pace with climate change. In addition, land use and management changes within the catchment need to be addressed.

The Department for Communities and Local Government, (CLG 2012) states “...Local Plans should take account of climate change over the longer term, including factors such as flood risk”

Areas at risk from flooding of any sources are classed as inappropriate development, and the Environment Agency (EA) will no longer fund defence schemes for developments that are placed in areas of high risk.

Local authorities should safeguard land and apply a sequential, risk based approach to determine areas more susceptible to flooding. Alternatively, an exception test can undertaken.

If the Sequential test is not possible to allocate low risk flood zones apply the Exception Test.

Sites should be prioritised where there is; the lowest probability of flooding, availability and appropriateness for development.

Demonstrating wider sustainability benefits that outweigh flood risk for the community. Based on a Strategic Flood Risk Assessment

On the basis of the Strategic Flood Risk Assessment, the site will not be accepted if a better alternative exists.

Demonstrating the safeness of the development for its lifecycle and the vulnerability of its users. It will not create flood risk elsewhere and will reduce overall risk. Based on a site specific flood risk assessment.

Following both tests, the most vulnerable development is in an area of lowest risk

Development is resistant and flood resilient

And gives priority to the use of sustainable drainage systems.

The opportunity offered by new developments to reduce the impact of flooding should not be neglected. It will be assumed that the developer must defend new developments and be accountable. This has further implications where new developments will no longer be allowed to connect to surface water drainage systems and front gardens must comply with sustainable urban drainage measures. These actions will help lessen flood risk and provide clear accountability for those wishing to be compensated due to flooding.

Flood management assets will need to cope with an expected average 20 per cent increase in river flows by 2050.

Most of the available funding at the disposal of the EA is spent on improving existing flood defences and maintenance. This funding comes from central government and is allocated in 3 year cycles. During the period to 2015 the EA’s funding will be cut by 20%.

By 2035 investment will need to have almost doubled compared to the year 2010 -2011 (excluding inflation). It is likely that alternative sources of funding will be needed. Local communities that benefit from flood defences may be expected to contribute towards them.

By working with industry partners an integrated approach can help mitigate flooding. Flood effected homes can be restored to a higher standard of resilience by insurance companies in order to reduce premiums. Currently the availability of insurance is guaranteed due to an existing agreement between government and the insurance industry, however this ends in 2039. Developments built against Sequential Testing may then not be guaranteed insurance by the Association of British Insurers.

The issues surrounding flooding will have a significant impact on the way future infrastructure is designed. Defence against flooding can be increased, but floods will still happen, and not all properties can be defended. In the future too much may be expected of CMFPs and reliance may shift back and forth between active management and physical defences

Local community funding for flood protection may be problematic, as affluent areas will tend to protect themselves whereas less wealthy areas may simply decline.

The benefits produced from the investment into CMFPs are not yet conclusive. If proven inadequate the resource may be better invested in physical defence schemes, but these schemes must stem from an inherently risk-based, resilient design.

Retrieved from "https://www.designingbuildings.co.uk/wiki/Planning_for_floods"
Create an article