Local plans are prepared by one or more district planning authorities (local planning authorities responsible for district matters). They set out a framework for the future development of an area on a 15-year horizon. They define: the priorities for an area, strategic policies, the framework for neighbourhood plans, land allocations, infrastructure requirements, housing needs, requirements for safeguarding the environment, measures for adapting to climate change, and so on. These policies should be illustrated geographically on a policies map.

Local plans are also the starting-point for considering whether planning applications should be approved.

The Planning and Compulsory Purchase Act 2004 and the Town and Country Planning (Local Planning) (England) Regulations 2012 set out matters that should be considered when preparing a local plan and prescribe their form and content. The National Planning Policy Framework describes the evidence that should be gathered in the preparation of local plans and the approach that they should adopt (Paras 150 – 185).

Every local plan must be accompanied by a ‘sustainability appraisal’, and if the plan is thought likely to impact on certain habitats or species it may also require a ‘habitats regulation assessment’.

There is a duty to cooperate with neighbouring authorities and certain other public bodies in the preparation of a local plan, and community and statutory consultation is required. In addition, a draft must be submitted to the Planning Inspectorate for examination. See Test of soundness for more information.

Local planning authorities are required to have an up to date local plan. They must also prepare a ‘local development scheme’ that (amongst other things) sets out a timetable for reviewing the local plan to ensure it remains up to date. What constitutes ‘up to date’ will depend to some extent on the nature of the local area, but local plans are likely to be updated, at least in part, every five years.

The National Planning Policy Framework (NPPF) states that If a plan is absent, silent or out of date, permission for planning applications should be granted, unless there are significant and demonstrable reasons not to grant permission.

[edit] Stages in a local plan

This image is from ‘Plain English guide to the Planning System’ published by the Department for Communities and Local Government in January 2015. It is made available under the Open Government Licence. 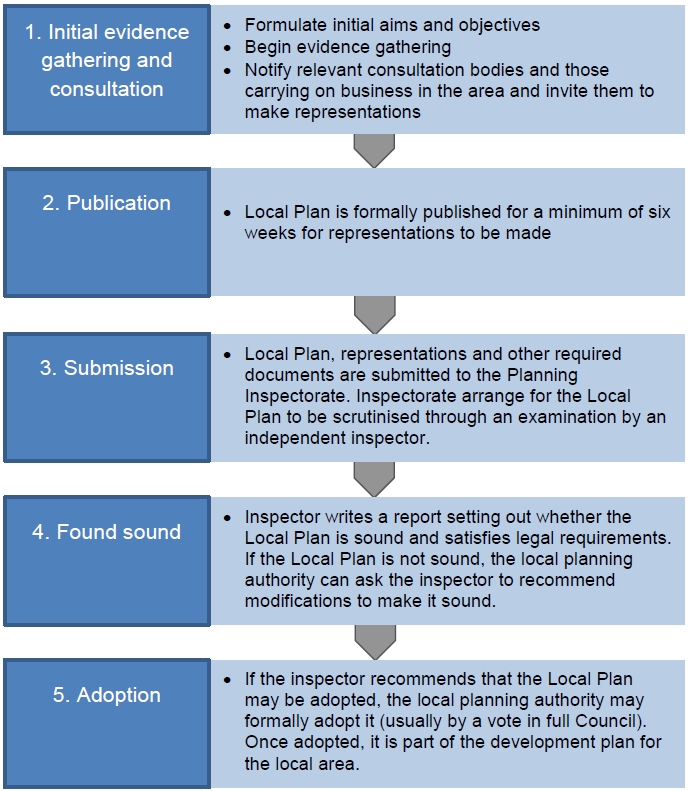 Local authorities were given a 12-month transition period to ensure that existing plans conformed with the NPPF, however:

In January 2014, then planning Minister Nick Boles suggested that new guidance would be issued to the effect that planning applications that might undermine a local plan could be refused if the local plan has been submitted to the Planning Inspectorate but had not yet been approved.

In February 2014, The Planning Officers Society suggested that the duty to co-operate between local planning authorities was causing too many local plans to fail and should be restricted to the strategic stage (Ref. PLANNING FOR A BETTER FUTURE Our planning manifesto for the next government).

In July 2015, a letter from Communities Secretary Greg Clark to the Chief Executive of the Planning Inspectorate Simon Ridley said:

“We have recently seen significant positive plan-making progress: 82% of authorities have now published local plans and 64% adopted plans compared with 32 and 17% in May 2010 respectively. However, a written Commons statement made at the same time by Planning Minister Brandon Lewis made clear that where local authorities failed to produce a local plan by early 2017, “we will intervene to arrange for the plan to be written, in consultation with local people.”

In March 2016, the Local Plans Expert Group published LOCAL PLANS, Report to the Communities Secretary and to the Minister of Housing and Planning, which set out proposals to speed up and simplify the process of making local plans. A consultation was opened on the proposals, with representations required by 27 April 2016.

In April 2017, research by planning consultancy Lichfields found that 43% of local authorities had yet to publish even a draft local plan.