In 2008, the government published Future Water, The Government’s water strategy for England. The strategy was published as a response to the 2004-06 South East of England droughts and the floods of 2007. It set out the government’s vision for the water sector in 2030 and the measures proposed to help deliver that vision. 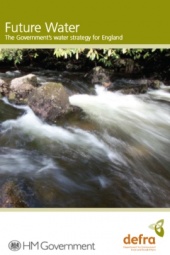 In the Foreword, the then Secretary of State for Environment, Food and Rural Affairs, Hilary Benn said:

“In England, the average person uses about 150 litres of water a day – that’s about a tonne a week!... The South East and East of England already face increasing demand on a finite water supply. The drought of 2004-06 was only managed through controls on what we could use water for. This was not a one-off; indeed droughts are likely to be more common. By 2080, some long term climate projections forecast half as much rainfall in summer (nothing like fully offset by 30% more rainfall in winter) in the South East. We need to plan ahead and each of us needs to play our part…. We have, of course, not only to cope with too little water. Indeed the last year has been characterised more by too much water with serious flooding in many parts of the country. Sir Michael Pitt’s report into these floods shows that we still have lessons to learn as a country about defending ourselves from, and learning to live with, floods.”

The document describes ‘...a vision of a sector that values and protects its water resources; that delivers water to customers through fair, affordable and cost-reflective charges; where flood risk is addressed with markedly greater understanding and use of good surface water management; and where the water industry has cut its greenhouse gas emissions.’ This includes:

The document is divided into the following sections:

Retrieved from "https://www.designingbuildings.co.uk/wiki/Future_Water,_The_Government%E2%80%99s_water_strategy_for_England"
Create an article