Water is a critical and finite resource. It covers over 71% of the Earth's surface and is essential for life, playing a key role in the production of food, human health and sustaining the natural environment.

However, water, particularly of drinking water quality, is becoming increasingly scarce in most of the populated regions of the planet. The pressure is on to reduce water demand by reducing wastage, to reuse or recycle as much as possible, and to look at other means of minimising our impact on the water environment. Overall, we must be more efficient with our water utilisation.

This notion that it is important to conserve water is not a recent one. Whether it is the intricate reservoir and sewage systems of the Indus or the more aqueduct systems found in imperial Rome, the need to use water efficiently has been innate in human populations since the birth of modern civilisations. However, we now need to find new ways to conserve water and to use it efficiently.

[edit] The national and international context

In 2006, the House of Commons Science and Technology Committee on water management suggested that, 'Water resources in England and Wales are threatened by below average rainfall in the short-term and climate change in the longer-term. The use of these resources is also facing increasingly tight regulation in order to meet ever higher ecological requirements. Simultaneously, demand for water is increasing because of population growth, a decreasing average household size and growing use of water-intensive appliances'.

In 2012, the global population was estimated at 7,060,253,019 (USCB, 2012) and is expected to rise to over 9 billion by the year 2050 (GeoHive, 2012). This rise in population is one of the main reasons for the pressure on water resources. The areas that will experience the highest rates of population growth are in developing countries where water is in short supply due to factors such as drought and poor water conservation.

At the Waterwise annual conference in 2009, Pamela Taylor said, “In the end, avoiding waste – of water or anything else – is a society thing. Companies can supply; regulators can tell them how; NGOs can organise campaigns; governments can set policy. But unless there's a collaborative effort to explain why it matters, then it's very unlikely to succeed.”

The water that we use in the United Kingdom is pumped, purified, treated and heated before it reaches our homes. This process greatly increases the amount of energy that we use. Domestic hot water usage alone is responsible for 35 million tonnes of greenhouse gas emissions (DEFRA). When we are wasting water, we are also wasting the energy that is used in preparing it for use. 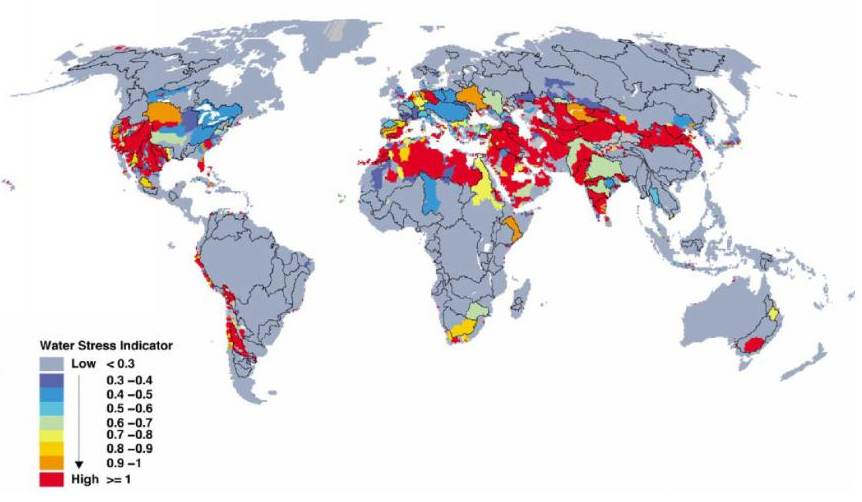 Technically, there is enough freshwater on Earth to fulfil the needs of the global population, but a combination of factors mean that there are significant scarcity issues in many areas:

There are also a number of amendments to the 2009 edition. These include composting toilet arrangements, rainwater and greywater, and water efficiency.

The various building rating schemes all reflect the heirarchical approach of reducing demand for water at source, ensuring efficient distribution (including metering, leakage detection etc), and then use of alternative sources. 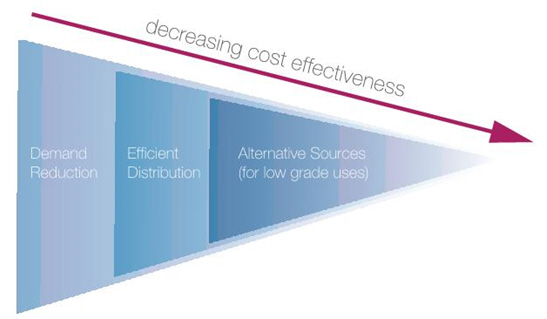 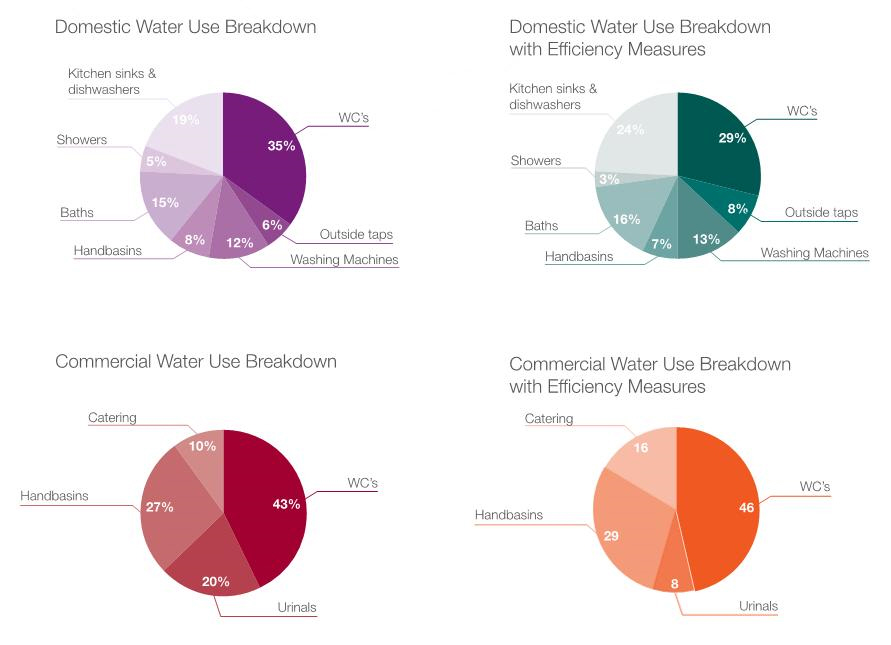 There are a number of relatively straight-forward water efficiency measures that can be made that not only conserve water but also save money. Water efficiency should be specified on all projects, unless it can be proven to be to the detriment of other systems.

All fittings in the UK should comply with the Water Supply (Water Fittings) Regulations 1999. There may be financial benefits if technologies are on the Water Technology List and qualify under the Enhanced Capital Allowance Scheme (this offsets the cost of the technologies against tax for that year).

A brief overview of the potential savings are outlined below:

Baseline water consumption can be reduced at source through passive or active measures.

Passive measures are those which require no behaviour change by the user. They include:

Urinals are often set to flush regardless of use, typically 3 times an hour. A number of devices can be used to control flush frequency:

In areas where there is insufficient surface water or where groundwater is particularly inaccessible but there is an abundance of rainwater, rainwater harvesting can be effective.

Despite the fact that the United Kingdom receives a high level of rainfall, water resources are under serious pressure. Rainwater harvesting systems range from the humble water butt used to water domestic gardens, to schemes such as the Millennium Dome in London in 2000, where rainwater was collected from the 100,000 sqm roof and filtered through reed beds in the landscape before being returned to the Dome and used to flush the 700 toilets. Typically, rainwater is collected from building roofs and then stored in a tank for non-potable use. Most non-potable water applications do not require UV or chemical treatment, although treatment might be appropriate depending on the potential for human exposure.

The Code for Sustainable Homes (2006) encourages the installation of rainwater harvesting systems in newly built homes for use in the garden, washing clothes and dishes and other domestic uses such as flushing toilets. It has been reported that this can reduce the amount of mains water being used by up to 50%. The Environment Agency suggests that, 'reducing the volume of mains water supplied means that less water is taken from lakes, rivers and aquifers and more is left to benefit ecosystems and help sustain the water environment'.

Greywater is wastewater from showers, baths, washbasins, washing machines and kitchen sinks. It is possible to collect such water and, after treatment, use it for purposes that do not require drinking water quality, such as toilet flushing and garden watering. (Environment Agency, 2011). This greatly reduces the demand on mains water as well as reducing the volume of water discharged into sewage systems.

As well as conserving water this will also save users money on their water bills (if they have water metres installed). According to the Environment Agency (2011), greywater recycling systems have the potential to reduce the amount of mains water used in the home by about a third.

The limitations of initiatives such as rainwater harvesting and greywater harvesting are that even though it reduces demand for mains water, it does not actually contribute to a reduction in water consumption. In addition, long payback times combined with small storage volumes mean it can be less effective than other water conservation measures.

There are many challenges in implementing sustainable water management practices. There is a social reluctance to change habits and routines, and it is a field laden with expectations and prescriptive legislation. This means that the physical systems which make up our current infrastructure have a high degree of inertia over time. Change will only happen slowly, alongside the development of knowledge, understanding and acceptance.

The safe implementation of water recycling and reuse in all countries and for all types of applications requires the development of a global framework including regulatory requirements and policies, water quality control and risk assessment, design and operational recommendations with codes of practice, as well as communication and education with stakeholder and community involvement. In the UK there is now a British Standard for rainwater recycling (BS8515:2009) and BS 8525 for greywater.

This article was originally created by Atehrani 11 March 2013.