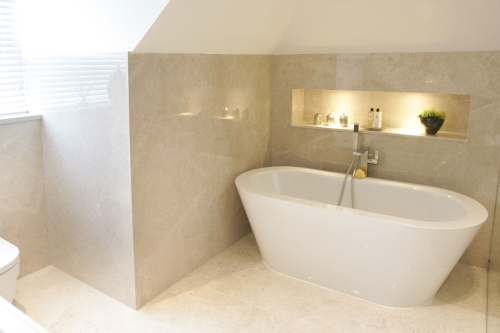 A bath (sometimes referred to as a bathtub or tub) is a large container for water that can be used for immersing or washing a person's body (or sometimes other objects). NB A bath can also be a type of appliance that is used to collect and remove water (by way of an overflow or waste drain) once it has been used.

Evidence of the ritual act of bathing dates back to ancient times. This act typically took place in communal bath houses.

Early versions of personal baths supplied by water pipes (rather than buckets of water that have been carried) have been found in Ancient Greece. The baths were made from clay or ceramic and supplied by copper pipes.

The Ancient Romans developed a form of heating water for baths which used hot materials such as rocks. The heated water was then poured into the bath.

Advances in the manufacture of the bath took place in the 18th century. This came with the adoption of cast iron, tin and copper as a suitable material for stand alone baths. These devices were primarily used by the aristocracy and became more elaborately designed and decorated.

They were also manufactured from porcelain (a ceramic material made from clay that might be described as 'vitreous china' when coated with enamel). This might be referred to as ceramic, porcelain or china sanitaryware and is often white, with the incorporation of porcelain enamel coatings.

In the 20th century, smaller spaces and increased demand drove the introduction of more utilitarian baths. These baths were built in rather than stand alone units that were eventually made from lighter materials that were less expensive to produce and easier to maintain.

Modern baths are made from a wide range of materials, including coated metals, cast iron, steel, acrylics, fibreglass and so on. They can be produced in a variety of shapes and colours, although they are typically rectilinear and long enough to accommodate a person who is in a reclined position.

There are several different types of installed or stand alone baths. These can include:

The Building Regulations Approved Document G: Sanitation, hot water safety and water efficiency suggests that a bath is a type of sanitary appliance or sanitary ware that is further described as part of a bathroom (‘…a room containing a bath or shower and, in addition, can also include sanitary accommodation.')

Approved Document M – Access to and Use of Buildings, includes minimum requirements for space available around a bath.

Additional requirements for drainage are set out in Approved Document H: drainage and waste disposal.

Retrieved from "https://www.designingbuildings.co.uk/wiki/Bath"
Create an article