An alcove is a recess that opens into a room or other space, partially enclosed by vertical elements such as walls, pillars, balustrades, and so on.

In medieval architecture, alcoves often featured in halls, separated from the main space by curtains or timber partitions. In Roman and Renaissance architecture, alcoves were adapted to become tall, elegant semi-circular spaces hollowed out of thick walls and used to display statues and sculptures.

In more modern architecture, bed and kitchen alcoves developed as a way of conserving space in constricted buildings such as residential apartments. They now often appear to one side of a chimney breast.

Smaller alcoves can be used to contain ornaments, shelving, and so on. When designed carefully they can create attractive focal points and enhance the character of a particular room.

Alcoves may be designed to blend into their surroundings as architectural features, and may include shelving, concealed lighting, a glass front and so on. Small rectangular or square box alcoves are popular in contemporary architecture, often painted a deeper, or contrasting, colour to the rest of the room. This helps to give a greater impression of depth.

When designing an alcove, or adapting a space to incorporate one, it is important to consider the space that will be 'lost', as often, to achieve the required recess, a wall will need to be brought forward. New runs of skirting or cornicing may also be required, as well as new positions for power sockets.

It should also be borne in mind that there could be services running through the existing wall, which may need to be re-routed, or may need to remain accessible.

Cracking can also be a problem where new plaster meets old plaster. To avoid this, the wall should be properly skimmed to a minimum of 400 mm beyond the point where the two types of plaster meet. Manufacturers offer a wide variety of plaster casts for whole alcoves. 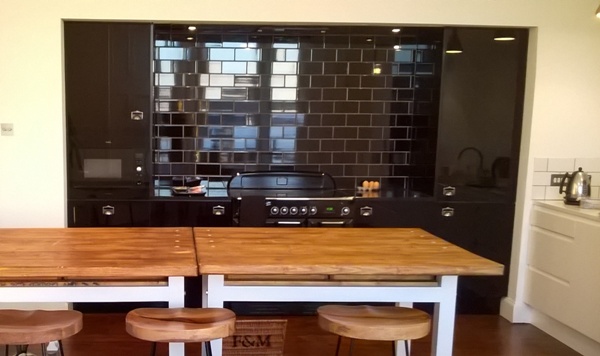 Retrieved from "https://www.designingbuildings.co.uk/wiki/Alcove"
Create an article