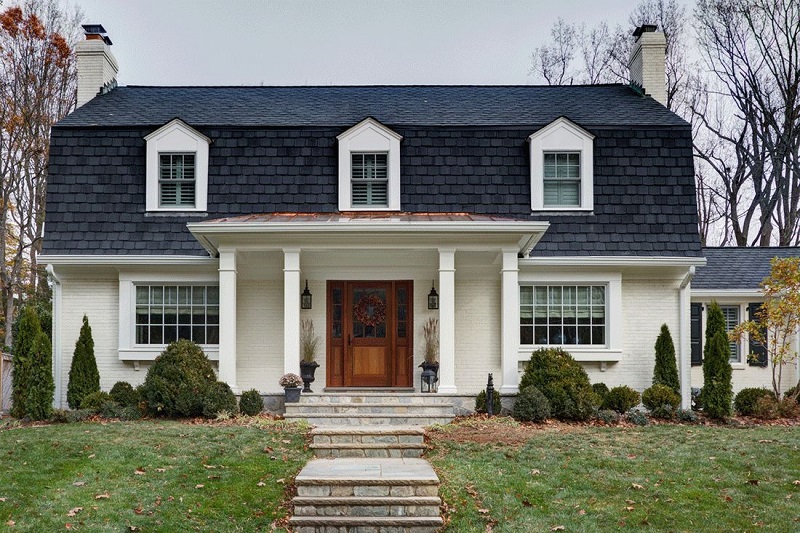 A mansard roof, also known as a French or curb roof, is a roof characterised by that fact that each of its four sides has two pitches, the lower pitches being steeper than the upper pitches. It is similar to a gambrel roof but differs in that it displays the same profile on all sides (whereas a gambrel roof has vertical gables at either end). The lower slope is commonly fitted with dormer windows.

Mansard roofs allow for increased space beneath their steeper sides. They maximise headroom inside the upper storey of the building whilst lowering, what would if it were simply-pitched, be a very tall roof. The mansard form can also help water runoff, as the pitch increases towards the eaves, where the runoff is likely to be at its greatest.

When viewed from near the building at ground level, the upper slope is often not visible.

The commonly-attributed earliest example of a mansard roof is the Louvre, designed by Pierre Lescot around 1550. It was popularised in the French Baroque period by Francois Mansart and became widely used during the Second French Empire (1852-1870) as well as in the United States and Europe. One of the factors attributable for its popularity in France was that houses were taxed by height or the number of storeys below the roof. The design of the mansard enabled the creation of an additional floor without having to pay additional tax.

I love this design!!! I have a home with a mansard roof and I am trying to renovate the front. I am wondering if you know the dimensions of the two windows on each side of the door?