The Millennium Dome (known as 'the Dome') is a fabric clad, cable net structure in Greenwich, London. It opened in 2000 as the centrepiece of the UK’s millennium celebrations, which ran from 31 December 1999 to 31 December 2000.

It was subsequently rebranded the O2 in 2005 and re-opened to the public in 2007, containing the O2 Arena, the busiest music arena in the world. It was also the venue for the gymnastics during the London 2012 Olympics.

A national celebration for the Millennium year in was originally conceived by John Major's Conservative government in March 1994. A consultation paper was published by the Millennium Commission in March 1995 and bids invited in May. Four sites were shortlisted, and in January 1996, creative communications agency Imagination Group were selected to develop ideas.

The Imagination proposal however was intended for the NEC site in Birmingham. Whilst this was logistically a very straight-forward site, and was more geographically central within the UK, the government felt that the Greenwich peninsular had more resonance with the theme, as it is crossed by the meridian line, and being in a deprived area of East London would benefit more from the investment that the millennium celebrations would bring.

Imagination were persuaded to move their proposal. However, being the site of a former gasworks and being very exposed, the Greenwich site brought with it its own problems. Architect’s Richard Rogers (now Rogers Stirk Harbour + Partners) and engineers Buro Happold proposed the idea of covering the site with a large fabric dome. This would create the shelter that would be required for a year long celebration that would open and close in the winter, and would allow the exhibition content to be constructed with relative freedom and in relative secrecy.

The New Millennium Experience Company Ltd (originally Millennium Central Ltd), was established to co-ordinate the design, construction and operation of the Millennium Dome and associated celebrations. The company issued a single share that was owned by the cabinet office minister (first Peter Mandelson and then Lord Falconer).

At 320m in diameter, the dome is the largest single enclosed space in the world. It was constructed by McAlpine/Laing Joint Venture (MLJV), a joint venture formed between Sir Robert McAlpine and Laing Management.

The Dome is neither a true dome, nor a conventional fabric structure, it is a cable net structure, clad with flat fabric panels. The Dome is 52m at its peak, is supported by 12 masts 100m high and 72km of cables. It includes a large cut out section that accommodates a ventilation shaft from the Blackwall Tunnel.

The Dome fabric is a PTFE coated glass fibre fabric. There are in fact two layers of fabric, in order to provide some insulation between the inside and outside and to reduce the likelihood of condensation.

During the millennium year, the Dome contained a number of exhibitions or ‘zones’. The main zones fell under three categories, originally conceived as:

Other installations and structures included: 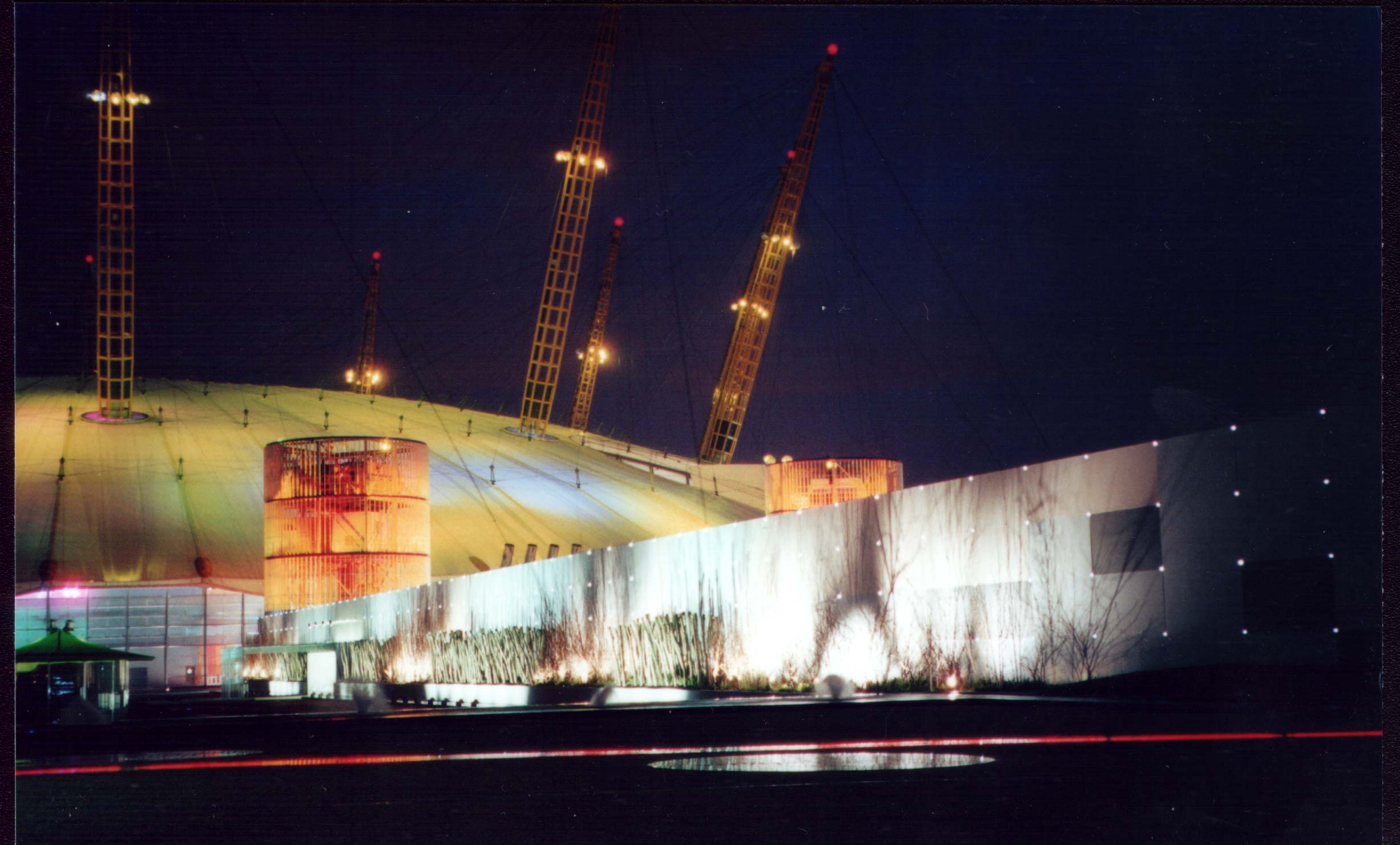 In the centre of the Dome, there was a major performance area housing the Millennium Show, with seating for 5,000 and space for 7,000 standing spectators. The show, performed 999 times during the year of operation, was composed by Peter Gabriel, with staging by Mark Fisher, and performed by an acrobatic cast of 160 who were trained from scratch and went on to form the basis of the Generating Company, an international touring circus company.

The Dome attracted 6.5 million visitors during its year of operation, considerably lower than the 12 million projected. This was partly due to the fact that the Labour government gave away one million tickets to school children. These children might otherwise have come as paying customers and brought their families with them. Press coverage of the Dome also impacted on visitor numbers. Nonetheless, the Dome was the most visited building in the world in 2000, and had better visitor satisfaction numbers than Disney.

During its development, the Dome was never very far from controversy, whether it was scepticism that it would be completed on time or in budget or about the content of the zones, through to detailed controversy about the environmental performance of the roof fabric, the nature of the Faith Zone, and whether the giant baby that formed part of the Body Zone should wear a disposable or re-useable nappy. The headline 'Dome' became a convenient hook for anyone with an agenda to publicise.

When the Dome opened for testing in December 1999 there was a temporary respite from the press onslaught as reviewers conceded that it would be completed on time, it had been completed on budget, and it did live up to expectations, with journalists quickly changing their positions. However, problems on the opening night proved disastrous. There were difficulties issuing invitations, and then there were insufficient security gates resulting in long queues to get in. Newspaper editors, not used to having to wait, took their revenge by reversing their position again and slating the Dome for the next 12 months.

Jennie Page revealed for the first time on Radio 4’s The Reunion in 2010 that there had in fact been a coded bomb warning on the opening night resulting in a serious security situation.

In February 2000, Jennie Page was replaced as Chief Executive by PY Gerbaux who took a more populist approach to operating the Dome.

In February 2017, it was reported that builders laying a cable had accidentally dug up and destroyed the Blue Peter time capsule that had been buried beneath the structure in 1998.

The Millennium Dome was the first major visitor attraction in the world not to have a car park. It was serviced instead by a new Jubilee line station, bus services and river ferries.

The Dome formed part of a ‘watercycle’. Rain water from the Dome roof was collected, filtered through reed beds in the landscape and used to flush the toilets. Waste from the toilets was then dried and burned to produce electricity which was used to power the Dome.

Retrieved from "https://www.designingbuildings.co.uk/wiki/Millennium_Dome"
Create an article