Richard Buckminster Fuller was a 20th century American engineer and architect famous for the invention of the geodesic dome. He had a lifelong interest in changing construction through technology and improving housing.

Born on 12th July 1895, he went to Harvard University in 1913. He was later expelled from university, and took a job working in a mill in Canada. Between 1917 and 1919 he served in the American Navy where he invented a winch for rescue boats, following which he was put forward for officer training at the Naval Academy.

In 1926, Fuller and his father-in-law developed a novel approach to producing reinforced concrete buildings and patented the invention. This was the first of Fuller’s 25 patents.

In 1927, he invented a simple-to-build, air-delivered modular apartment building and then the Dymaxion™ House. This was a cheap house that could be mass-produced and air-lifted into location. The house name was based on the words “dynamic”, “maximum”, and “ion” and became part of the name of many of Fuller’s later inventions. The word became associated with Fuller’s design philosophy of “doing more with less”. He later invented the Dymaxion Car, Dymaxion Bathroom and Dymaxion Deployment Units, which were mass-produced houses.

Fuller’s most notable invention was the geodesic dome. 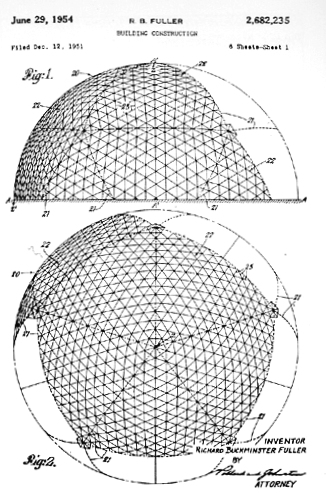 The dome is lightweight and easy to assemble and can enclose large areas without requiring intrusive columns like many other structures. In 1953 he designed the first commercial dome for the Ford Motor Company headquarters in Michigan, and he received a patent for the dome in 1954. He also supplied a large number of domes to the US military where they were used to cover radar stations at installations around the Arctic Circle.

It is believed that there are more than 300,000 geodesic domes around the world today which range from shelters in Africa to radar stations in remote locations, to geodesic structures in children’s playgrounds.

In addition to these inventions, Fuller was involved in other creative ventures and during the 1930s published a magazine called ‘Shelter’. From 1938 to 1940 he was a science and technology consultant for Fortune Magazine and during the 1940s he taught and lectured at universities and became a professor at Southern Illinois University (SIU) in the 1950s.

A large part of his life was spent travelling the world lecturing and he authored nearly 30 books and received 47 honorary doctorate degrees. Shortly before his death in 1983, he received the Presidential Medal of Freedom. This is the highest civilian honour in the USA, and the citation acknowledged that his “contributions as a geometrician, educator, and architect-designer are benchmarks of accomplishment in their fields."

After Fuller's death in 1983, chemists discovered that the atoms of a carbon molecule could form a structural array similar to a geodesic dome and so they named the molecule "buckminsterfullerene."

Established in 1983, The Buckminster Fuller Institute (BFI) is the ‘Information Clearinghouse on R.B Fuller’ providing an inventory of practices and principles, articles featuring contemporary applications of Fuller's approach and on-line books, audio and video archives.

Retrieved from "https://www.designingbuildings.co.uk/wiki/Buckminster_Fuller"
Create an article