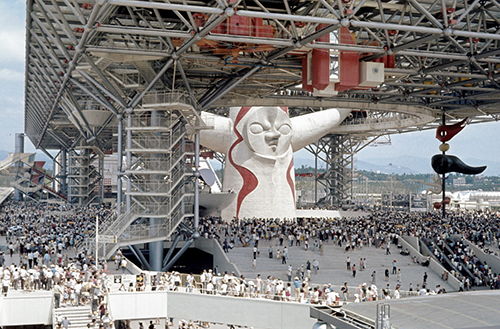 The term ‘megastructure’ was applied to a range of futurist proposals and experiments in architecture and design during the early 1960s. The main premise of a megastructure was that a single building or structure could be used as a frame to which infrastructure, utilities and additional units could be interconnected and expanded upon, almost as a self-contained ‘city’.

The term came to popular attention in Reyner Banham’s 1976 book ‘Megastructures: Urban Futures of the Recent Past’ and was seen as an architectural response from the likes of design group Archigram and Buckminster Fuller to the developing awareness of issues such as urban densification and overpopulation.

According to Douglas Murphy in ‘Last Futures: Nature, Technology and the End of Architecture’:

‘…megastructure also referred to an architectural aesthetic – massive, disparate structures combining strict artificial forms with an organic growth of spaces within. It was a serious attempt at developing the ongoing practice of addressing large urban problems through planning whilst simultaneously incorporating the rapidly changing lifestyles of the post-war era.’

Despite belonging more to theory than actual projects, megastructures had to conform to a number of criteria:

Several examples of megastructures were exhibited at events such as Expo 67 and Expo 70. These took the form of giant space frames such as; Buckminster Fuller’s geodesic domes, Kenzo Tange’s Expo 1970 Theme Pavilion (see top image), and modular units such as the Japanese Metabolist movement.

During the 1970s, megastructure designs were influenced by the environmental movement and the American ‘counter-culture’, and adopted forms that were intended to be ‘floating habitats’. Examples included Buckminster Fuller’s design for Triton City (a floating ziggurat housing block with plug-in units); Kenzo Tange’s Tokyo Bay project; and Frei Otto’s ‘Arctic City’ proposal for a large envelope structure 2 km across, under which a city could be constructed that would be sheltered from harsh Arctic conditions.

Retrieved from "https://www.designingbuildings.co.uk/wiki/Megastructure"
Create an article