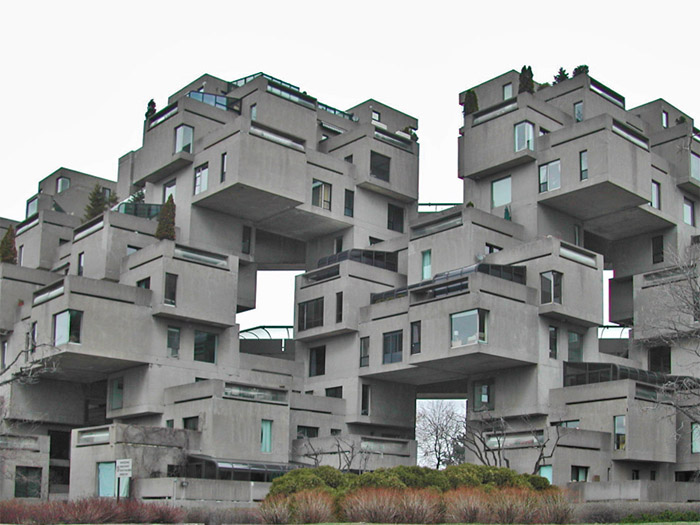 Habitat 67 is an experimental modular housing complex in Montreal, Canada, designed by architect Moshe Safdie as a vision for the future of urban living. The building was created as the showpiece for Expo 67, one of the largest world fairs which was held in Montreal in 1967.

Safdie had originally conceived the building as part of his university thesis. He had travelled across America and become disillusioned by the high-rise apartments and unsustainable suburban sprawl that he saw as the prevailing modern architecture. He was inspired in part by the movement of Brutalism which had attempted to reinvent urban architecture, as well as the post-war Japanese movement known as Metabolism. This was characterised by buildings that were designed as organic, living systems of prefabricated cells.

Located on Cite du Havre, a man-made peninsula, Habitat 67 is now regarded as an architectural landmark despite its failure to achieve Safdie’s aim of ‘reinventing the apartment building’ in the high-density urban environment.

Safdie was approached to develop the master plan for the building which was approved by the federal government and financed for completion by the time of Expo 67, where housing was to be one of the central themes.

Habitat 67 comprises 354 prefabricated stacked concrete modules arranged in various geometric configurations to reach 12 storeys in height. The interlocking forms are connected via walkways and include landscaped terraces. By creating a series of properties that each feature its own roof garden and access from an external ‘street’, the idea was to combine the urban garden residence with the modular high-rise apartment building.

Fifteen different housing types were developed that varied between 60 and 160 sq. m. To increase the energy efficiency of the building by preventing unnecessary journeys, six large elevator pillars were constructed to allow for vertical access that stops only on every fourth level.

While the original masterplan envisaged more than 1,000 residences, together with shops and a school, the completed complex featured just 158 apartments of varying sizes and formations, the reduction being due in part to the higher-than-anticipated per-unit cost. A factory had been built beside the site so that the prefabricated construction of the modules could take place in close proximity, before being connected by high-tension rods, steel cables and welding. Far from being the most cost-effective solution, as had been thought, the costs escalated to CAD$22 million (which translated to around CAD$140,000 per apartment).

Despite being experienced by some 50 million people during Expo 67 and being lauded as a ‘fantastic experiment’ by critics, it did not inspire the ‘revolutionary uptake’ of prefabricated, modular development that had been hoped for by Safdie. Plans were proposed to replicate the design in New York, Puerto Rico and Israel but never realised.

After Expo 67 the Canadian government sold the building to a businessman for CAD$10 million. In 1985, the tenants formed a limited partnership to purchase the building for CAD$11.5 million, and since then it has come to be seen as a leading example of a successful co-operative.

Today, it stands as an icon of Canadian architecture and a key tourist attraction, with apartments occasionally being let for very high sums.

In November 2018, Safdie Architects completed a comprehensive renovation of the 10th floor publicly-accessible unit of Habitat 67, to commemorate the building's 50th anniversary.

The repairs to the duplex unit, which were undertaken over a 2-year period, involved extensive interior restoration, technical upgrades to 21st century energy conservation standards, and tackling water damage sustained since the building's completion. This required that the exterior concrete walls were stripped, before insulation and waterproofing could be carried out. The original timber parquet flooring was also restored, as well as the installation of slot detailing to improve the circulation of air.

The unit is to remain open to the public as well as being a place of scholarly research. Safdie Architects are to continue their involvement in the complex's ongoing restoration.

Retrieved from "https://www.designingbuildings.co.uk/wiki/Habitat_67"
Create an article