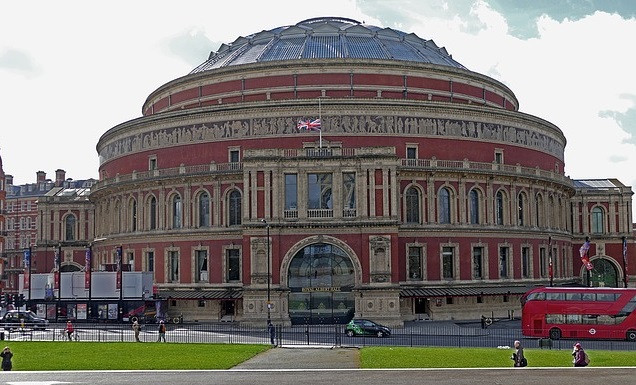 The Royal Albert Hall is a concert hall venue located on the southern edge of Hyde Park, in South Kensington, London. Since being opened by Queen Victoria in 1871, it has become one of the UK’s most famous performance venues, holding the Proms classical concerts every year since 1941.

Built in the Italianate style of architecture, which was popular in Britain during the 19th century, the hall was technically advanced, being the world’s first domed amphitheatre. The dome is a freestanding structure made of glass and iron, weighing 800 tons.

Queen Victoria laid the foundation stone as work commenced in 1867, and named the building after her husband Prince Albert, who had died six years earlier.

The hall was originally designed for a capacity of 8,000 people, although modern safety restrictions have reduced this to 5,544.

As well as being a Grade 1 listed building, the hall is a registered charity held in trust for the country, and receives no public or government funding.

The hall was designed by two civil engineers, Francis Fowke and Henry Y.D. Scott of the Royal Engineers, and built by the Lucas Brothers. The designers were influenced by the amphitheatres of Ancient Rome, and designed the hall as an ellipse, with major and minor axes of 83 m (272 ft) and 72 m (236 ft).

The hall is constructed mainly of Fareham Red brick with a mosaic frieze that encircles the building and measures 800 ft long. The frieze is formed of foot-long slabs of mosaic tesserae depicting the ‘Triumph of the Arts and Sciences’ in 16 different allegorical groups. Terracotta letters are inscribed 12 inches (300 mm) high above the frieze, combining historical and religious quotations.

The glass and wrought-iron dome reaches a height of 41 m (135 ft). The dome was constructed by the Manchester-based Fairbairn Engineering Company, who undertook a trial assembly on their own roof to ensure the 338 tonne iron metal frame could support the 279 tonne weight of glazing.

The trial was successful and so the dome was disassembled and transported to London on horse-and-cart where its iron girders were attached to the roof’s central elliptical ring one-by-one. When the props supporting the dome were kicked away the dome dropped just 0.8 mm before settling into position on the supporting walls.

It was only after the completion of the building that its poor acoustics became apparent, with an reverberation time of 11 seconds in some parts of the hall. The initial solution was to suspend a canvas awning below the dome, although this was not sufficient to solve the problem.

The awning was removed in 1949 and fluted aluminium panels were installed below the glazed roof. The problem persisted until 1969 when large fiberglass acoustic diffusing discs (also known as ‘mushrooms’ or ‘flying saucers’), were installed. 135 ‘mushrooms’ were installed, however, following advanced acoustic testing in 2001, 50 were removed and the remaining 85 were reconfigured to create a greater density at the centre of the ceiling and above and at the rear of the stage, thereby improving the sound quality for the audience around the hall.

The ‘mushrooms’ were deemed so successful that designers incorporated them in their plans for the Sydney Opera House. 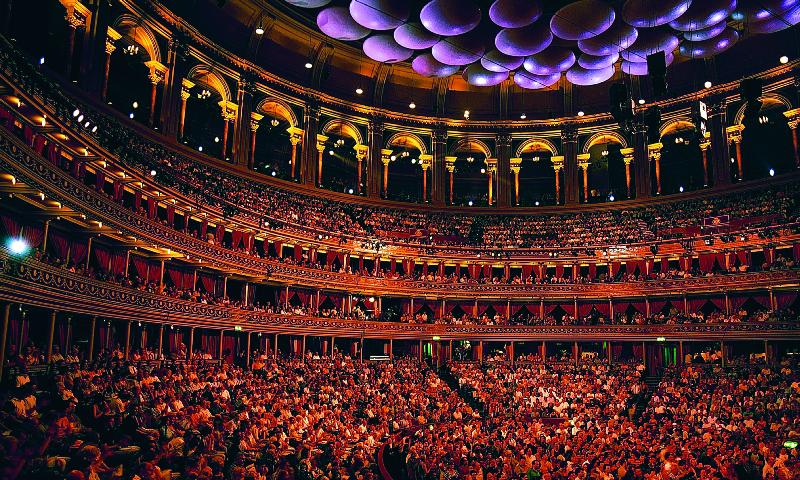 The official opening ceremony of the Hall was on 29 March 1871.

The hall underwent a programme of renovation and development from 1996 until 2004, improving auditorium ventilation, adding bars and restaurants, improving seating and backstage areas, and rebuilding the Circle seating to provide more leg room and improved sight lines. Each separate project was designed to be as discrete as possible so as not to disrupt the event programme.

A new south porch was also constructed, accommodating a restaurant, ground floor box office and below-ground loading bay. In 2003, its decorative tympanum was unveiled. It incorporates a mosaic symbolising musical sound bursting from the round central window.

Retrieved from "https://www.designingbuildings.co.uk/wiki/Royal_Albert_Hall"
Create an article