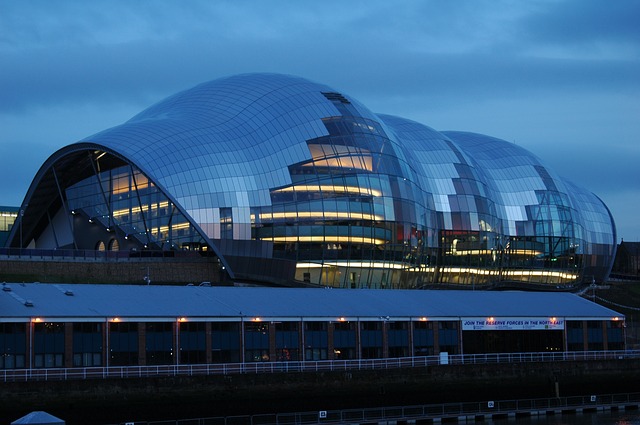 Sage Gateshead is a music education and concert centre located on the south bank of the River Tyne in Gateshead. Designed by Foster and Partners and completed in 2004, the building is an example of high-tech architecture and 'blobitecture'.

The building comprises three performance spaces which are acoustically independent, separated from one another to prevent noise transfer. Due to strong coastal winds, and a sometimes inclement climate, it was decided to group the structures together under a single protective cover.

The three independent, reinforced concrete structures containing the performance spaces are expressed on the outside by the undulation of the roof. To improve the acoustic performance of the structures, a specially-designed 'spongy' concrete mix was used with an increased air capacity.

The curved shell roof is made of 3,500 sq. m of trapezoidal glass panels and 3,043 stainless steel panels. Reaching a height of over 40 m, the shell roof is supported by four steel arches with a span of 80 m. The roof wraps in organic curves around the structures it contains, but does not touch them.

As well as rejuvenating the former industrial wasteland of the Tyne south bank, the building has received awards for its use of cutting-edge technology, structural design and acoustic engineering.

Retrieved from "https://www.designingbuildings.co.uk/wiki/Sage_Gateshead"
Create an article