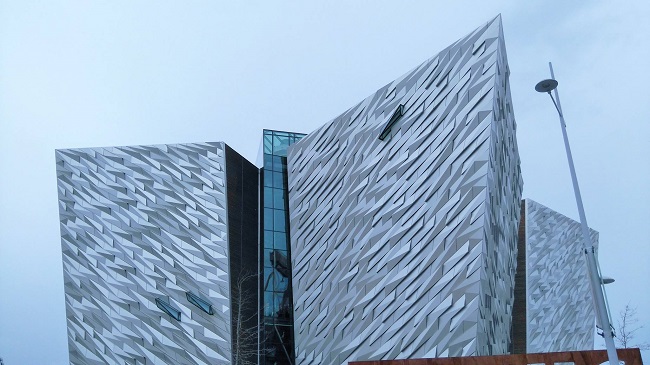 Titanic Belfast is a maritime museum and visitor centre in Belfast, Northern Ireland, dedicated to RMS Titanic. It is located on the site of the former Harland & Wolff shipyard, where the ill-fated ship was designed and constructed.

The concept for the building design was to replicate four 38 m (126 ft) high pointed hulls, the same height as the Titanic. The exterior façade is clad in 3,000 individual silver anodised aluminium shards which provide a shimmering effect in sunlight. With two-thirds of the shards having a unique geometrical design, a process of 'virtual prototyping' was developed specially for the project by Todd Architects.

Covering 14,000 sq. m, the building centres around a five-storey-high glazed atrium that provides views out over the city and dockyards.

The building took 3 years to construct, cost £77 m, and required one of the largest concrete pours in Northern Ireland's history. It was completed in time for the April 2012 centenary of the Titanic's maiden voyage.

The building is the centrepiece of the regeneration of Belfast's dockyards, now known as the Titanic Quarter. The plan is to combine retail, residential, business and cultural elements that serve as a celebration of the area's proud maritime heritage. With this transformative aim, it hopes to replicate the 'Bilbao effect' of Frank Gehry's Guggenheim Museum in Spain.

Retrieved from "https://www.designingbuildings.co.uk/wiki/Titanic_Belfast"
Create an article