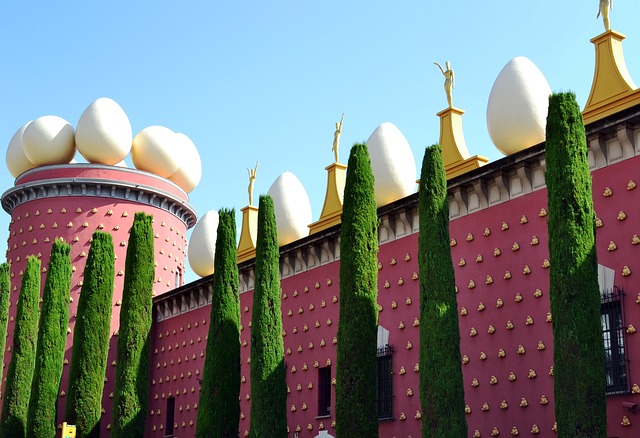 The Dali Theatre and Museum in Figueras, Spain is dedicated to the surrealist artist Salvador Dali, and has been described as being 'the largest surrealistic object in the world'.

It was conceived by Dali and the Mayor of Figueres, and designed by architects Joaquim de Ros i Ramis and Alexandre Bonaterra.

It was built on the site of the Municipal Theatre of Figueres which was constructed in 1850 but destroyed by fire at the end of the Spanish Civil War in 1939, leaving only the peripheral structure standing. The artist worked on the design of the building for over a decade until its completion in 1974, saying “I want my museum to be like a single block, a labyrinth, a surrealist object… People who come to see it will leave with the sensation of having had a theatrical dream.”

The complex includes Torre Galatea, a stone tower, and a glass geodesic dome which crowns the main building and has come to be seen as a symbol of the town of Figueres. It incorporates Moorish architectural details, sculptures and figurines. The external walls are decorated with representations of bread rolls, and giant egg sculptures are lined along the roof parapet.

Dali himself is buried in an unmarked crypt in the museum's main exhibition hall.

The museum receives approximately 6,000 visitors a day, making it one of the most popular in Spain.

Retrieved from "https://www.designingbuildings.co.uk/wiki/Dali_Theatre_and_Museum"
Create an article