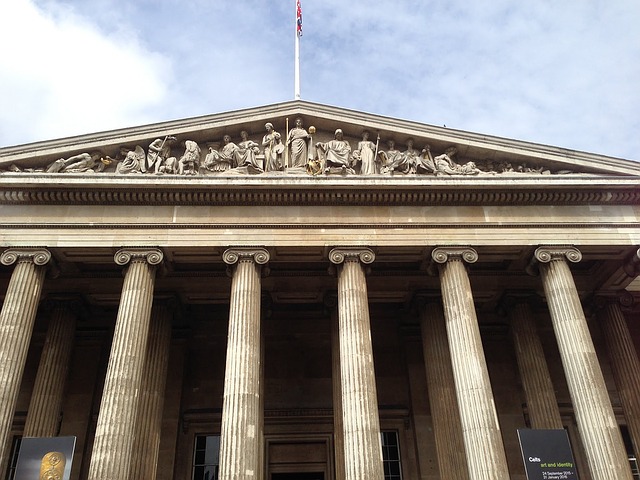 The British Museum is one of the largest and most comprehensive museums in the world. Located in the Bloomsbury area of London, it attracts more than 5 million visitors each year, contains an estimated 8 million works and covers an area of 92,000 sq. m (990,000 sq. ft).

It was originally established in 1753, based on the collections of the scientist Sir Hans Sloane, and first opened to the public in January 1759. However, as the museum’s collection expanded, the museum underwent a great deal of redevelopment. 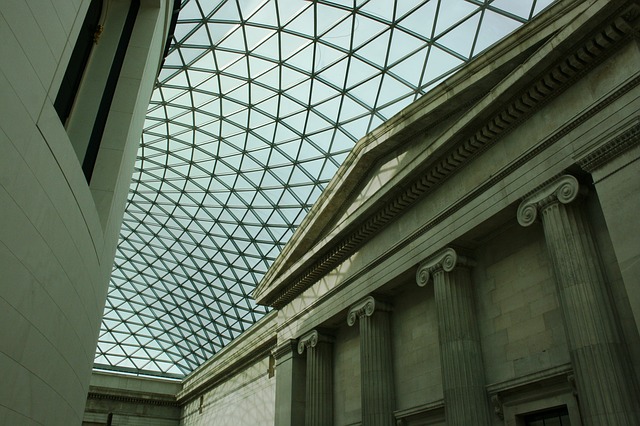 The core of the building was designed by the architect Sir Robert Smirke in 1823. It was designed as a quadrangle with four wings, in the Greek Revival style. The style had become increasingly popular since the late-18th century, when western Europeans had began to explore the sites of Ancient Greece.

Smirke designed 44 columns in the Ionic order, each 14 m (45 ft) high and based on the temple of Athena Polias at Priene. The pediment at the south entrance incorporates decorative sculptures depicting ‘The Progress of Civilisation’, consisting of 15 allegorical figures.

The building was constructed on a concrete base with a frame of cast iron, infilled with brick. The visible sections were clad with Portland stone.

Shortly after its completion in 1852, the quadrangle won the RIBA Gold Medal.

Robert Smirke’s brother Sydney took on design responsibility for the Weston Hall in 1845. For the ceiling he borrowed the patterns and colours from classical Greek buildings.

At the centre of the Great Court is the Reading Room, built in 1857 to a design by Sydney Smirke. The room was technically exemplary in its time, with a dome inspired by the Pantheon, and a diameter of approximately 42.6 m (140 ft).

Rather than being a free-standing dome, it was constructed in segments on a cast iron framework, and the ceiling was suspended on cast iron struts handing from the frame and made out of papier mache.

The bookstacks built to surround the room are 3 miles in length, and were made of iron to hold the books’ weight and protect against fire.

The White Wing was designed by the architect Sir John Taylor and constructed in 1882-5. The wing was designed on the request of the late William White – with a monumental stepped entrance and an inscription above the doorway.

Designed by Sir John Burnet, the galleries were built 1907-1914. They draw on Roman rather than Greek design, with prominent imperialistic features such as a Royal coat of arms and sculptures on the entrance stonework.

The Duveen gallery was intended to house the Elgin Marbles, and was designed by John Russell Pope who also designed Washington’s National Gallery. It was completed in 1938 but was struck by a bomb during the Blitz of 1940 and remained in a state of partial-dereliction until being restored and opened in 1962. 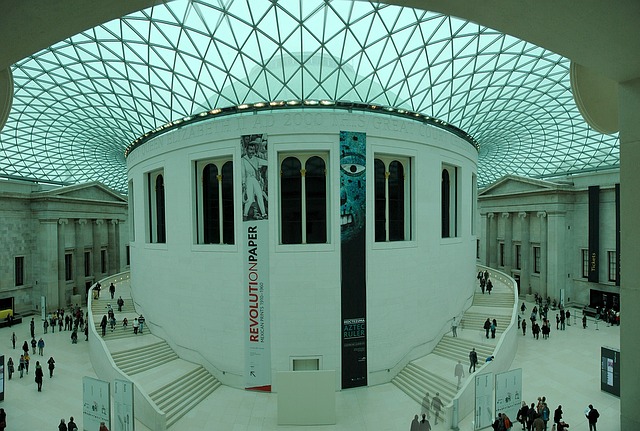 The original Robert Smirke design for the courtyard at the centre of the museum was for a garden, with the Reading Room at the heart of it.

However, in 1997, the library department was relocated to the British Library, and a competition launched to redesign the courtyard space, which had long been criticised for being congested and difficult to navigate.

The competition was won by architect Norman Foster, who transformed the courtyard into the largest covered public square in Europe, with its famous and celebrated steel-and-glass roof. The glazed canopy used state-of-the-art engineering by Buro Happold, with a unique geometry required to span the irregular gap between the Reading Room and the courtyard facades. In total it includes 3,312 unique panes of glass.

The Great Court was opened in December 2000, increasing the museum’s public space by 40%, and allowing free circulation around the main floor for the first time in 150 years.

Retrieved from "https://www.designingbuildings.co.uk/wiki/British_Museum"
Create an article