On 22 June 2017, Rogers Stirk Harbour + Partners (RSHP) were awarded a 2017 RIBA National Award for their new extension of the British Museum in London. It was also shortlisted for the RIBA Stirling Prize 2017.

This case study explores the project in detail. 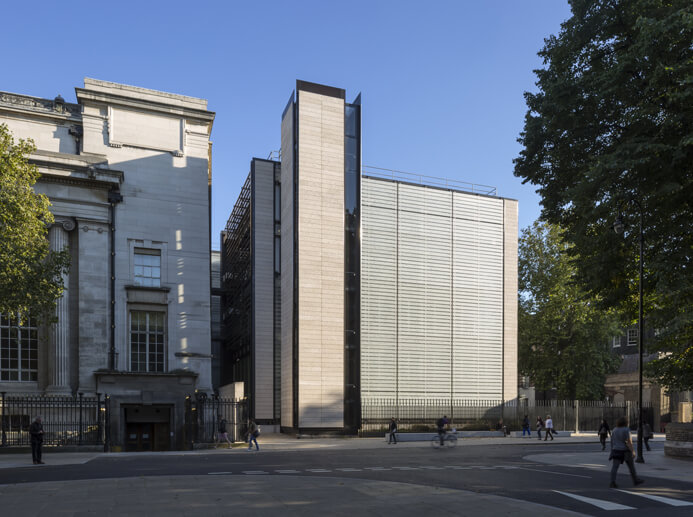 The World Conservation and Exhibitions Centre (WCEC) is on the north-west corner of the British Museum site in Bloomsbury. It consists of five vertically-linked pavilions (one of which is located entirely underground), and houses a new exhibition gallery, laboratories, conservation studios, storage, and facilities to support the Museum’ logistical requirements and loans programme.

It is the realisation of a complicated brief in terms of spatial challenges, technical requirements, and engineering technologies. Its achievement derives from the elegant and simple way these challenges are met, while maintaining a clear and coherent diagram and a refined and rational building enclosure.

The design approach was driven by the nature of the site: Four linked pavilions arranged in such a way as to respect the existing façades of the King Edward VII Building and Smirke Buildings and allow daylight to penetrate into existing spaces. The mass of the development is located to the east of the site to create good connectivity with the existing Museum and to mitigate impact on the Bedford Square properties. 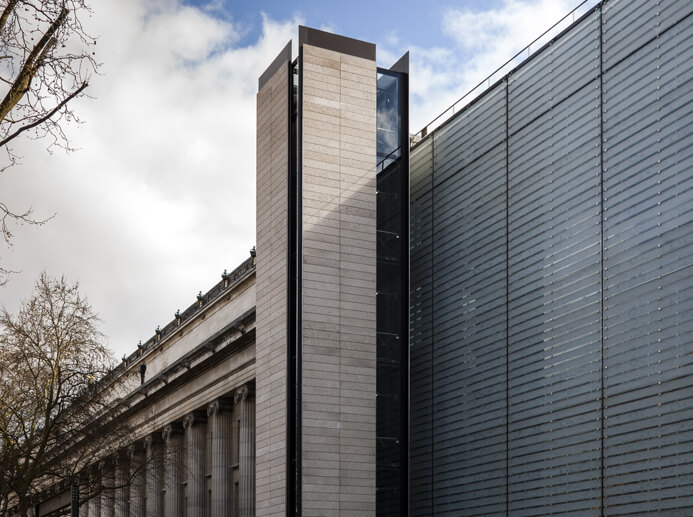 The north elevation of the Museum – formed by the King Edward VII Building – dominates Montague Place and is directly referenced by the rhythm of the structural grid. The massing sets the building height to that of the North Range providing a transition between the institutional scale of the nearby university, hospital and the Museum itself, and the adjacent domestic scale of Gower Street and Montague Street. Colour, and a sympathetic pallet of materials give a contextual response to the site and repair the fractured geometry of the street edge.

The functional requirements of the brief are arranged vertically across the pavilions. The Collections Storage Facility has been located below ground where the heavy floor loading can easily be accommodated and where the most stable environmental conditions can be found. Above this sits the new logistics hub on Level 0, linking into the existing Museum. The Special Exhibitions Gallery has been located at Level 2 (the main gallery level in the Museum) to allow the best connectivity for the public and to enhance the visitor experience.

The conservation studios sit above the gallery to provide good quality daylight as well as placing the requirement for flues, fume extraction and ventilation at the top of the building. The design includes a green roof across all four pavilions with nesting boxes for swifts and two beehives.

The scheme is arranged in two main elements, based on the idea that a building consists of primary ‘served’ spaces (offices, conservation studios, laboratories, galleries, etc) and corresponding secondary ‘servant’ spaces (vertical circulation, mechanical and electrical services distribution, access to the pavilion, etc). Each pavilion is served by an adjacent services and circulation core. This principle allows maximum flexibility within the pavilions and an efficient use of the cores, generating a clear logic of movement and use.

Each building includes three levels of underground storage and uses minimal interventions in the fabric of the existing Museum.The design also brings an order to the otherwise disparate and complex nature of the site and surrounding context. The linked pavilions are consistent in height with the North Range and one storey lower than the King Edward VII building.

The design received planning approval in December 2009. Work to demolish existing buildings and clear the site – as well as an extensive archaeological dig – took place during 2010 with construction taking place between 2011-13. 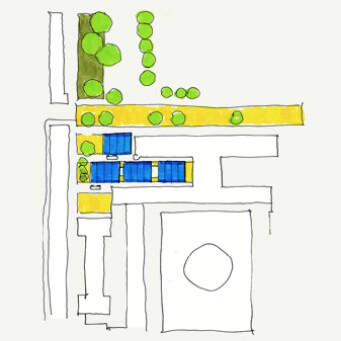 The design is sensitive to the Museum’s existing architecture and that of the surrounding Bloomsbury Conservation Area – the WCEC is bordered by seven listed buildings – whilst maintaining its own identity. The Portland stone and kiln-formed glass used on the pavilions are inspired by the materials of the existing buildings and the shaded façade subtly reveals the activities within. The mass and height of the pavilions create a subtle transition from the grand scale of the Museum to the more domestic proportions of the predominantly 18th-century properties in the neighbouring streets.

Over 5,000m² of new storage space means the Museum can now house its entire, disparate collection at the Bloomsbury site and the addition of a 42-tonne truck lift (one of the biggest in Europe) allows large or fragile objects to be transported to and from the building under controlled conditions.

The Sainsbury Exhibitions Gallery, which connects at ground level to the Great Court for easy public access, replaces the Reading Room as the Museum’s largest temporary exhibition’s space, providing a total area of 1100m² and 6-metre headroom for displays. It is capable of operating independently from the rest of the Museum with the potential for 24/7 public access and has its own foyer and shop. It opened in March 2014 with the exhibition “Vikings: life and legend” that took full advantage of the spacious new gallery by installing a 37m-long, reconstructed Viking ship. 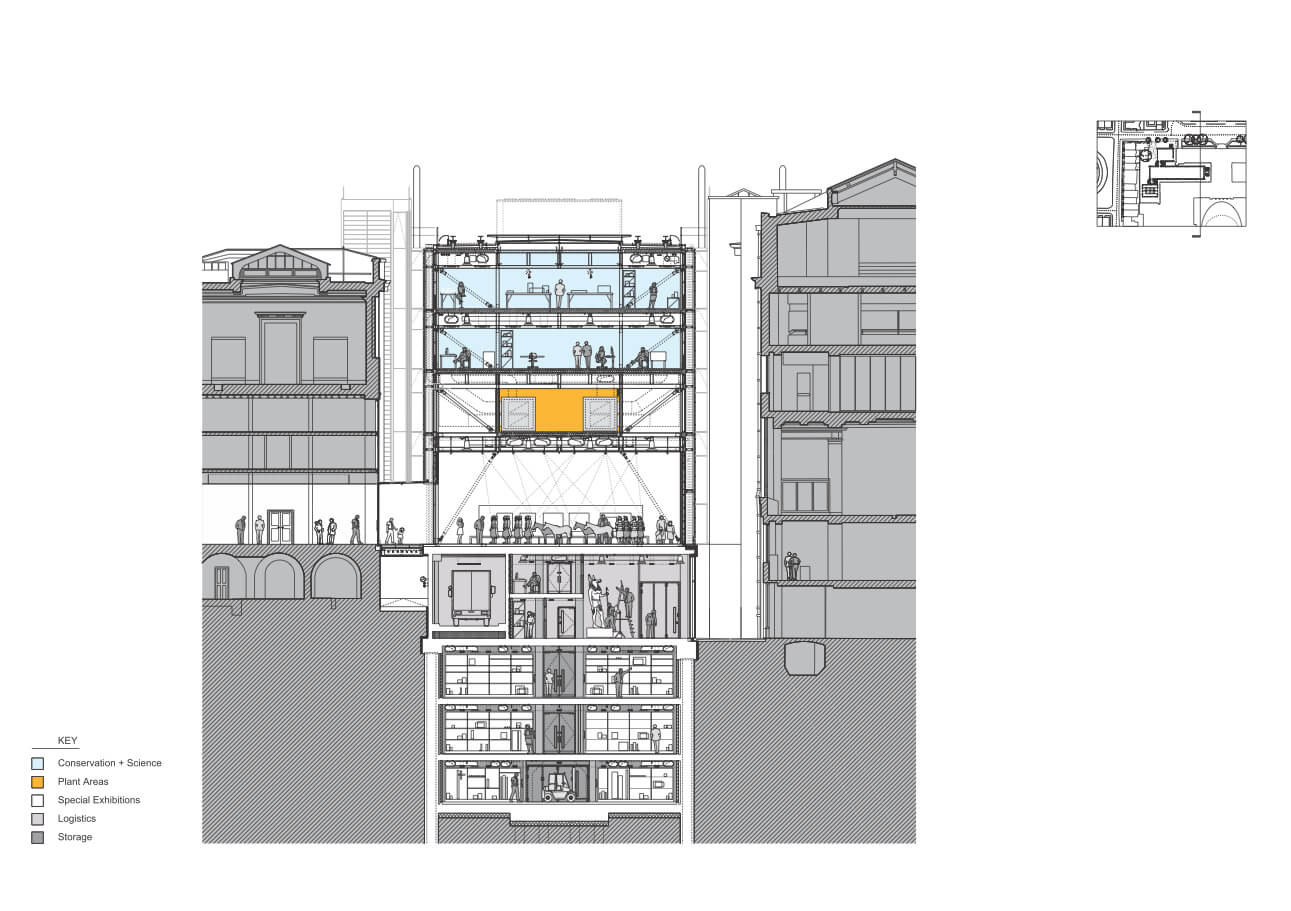 Despite being one of the largest redevelopment projects in the British Museum’s history, the construction of WCEC proceeded with minimal disruption to operations – and zero damage to its collection. 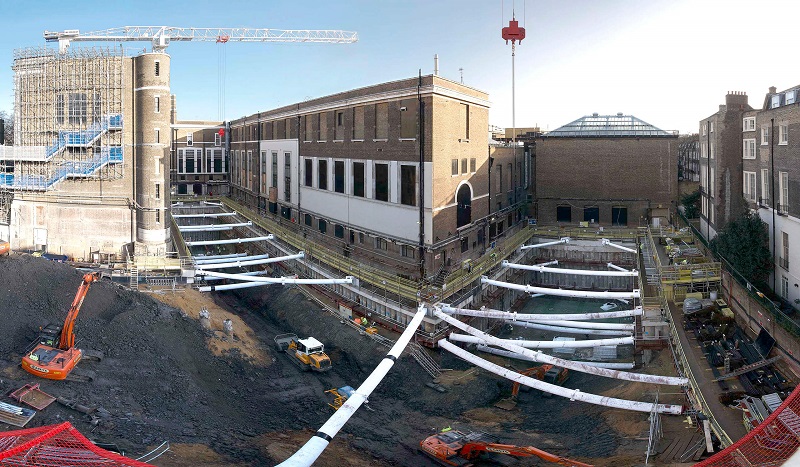 The outer perimeter of the WCEC’s basement was constructed using 480 contiguous secant piles. These piles form the primary structural perimeter of the basement and allowed the excavation to be carried out to 19 metres (62 feet) below street level.

Within the perimeter, a concrete frame was used to construct the five basement storeys. This contains the Museum’s collection storage facility, its science facility and the logistics level. The concrete creates a beautiful and robust space that, through its high thermal mass, can help moderate minor fluctuations in environmental conditions. The radiography room required further stability and was given a 6-tonne lead door and 900-millimetre- (35-inch-) thick walls.

Above ground, the Centre was constructed using a steel frame. Manufacturing was carried out off-site to ensure high build quality and reduce the programme length. The rapid erection of the exposed frame took the building from street to roof level in less than three months.

The building has been clad with more than 1,600 hand-cast, kiln-formed glass planks. The planks create a veil of privacy between the street and the private functions of the Museum, while allowing daylight in and controlling views out. The glass – etched with contour patterns inspired by Devon’s Jurassic Coast – has a matt, translucent quality that gives a sense of solidity from the outside. This effect complements the Portland Roach stone, also from Devon, that has been used to clad the stair towers. 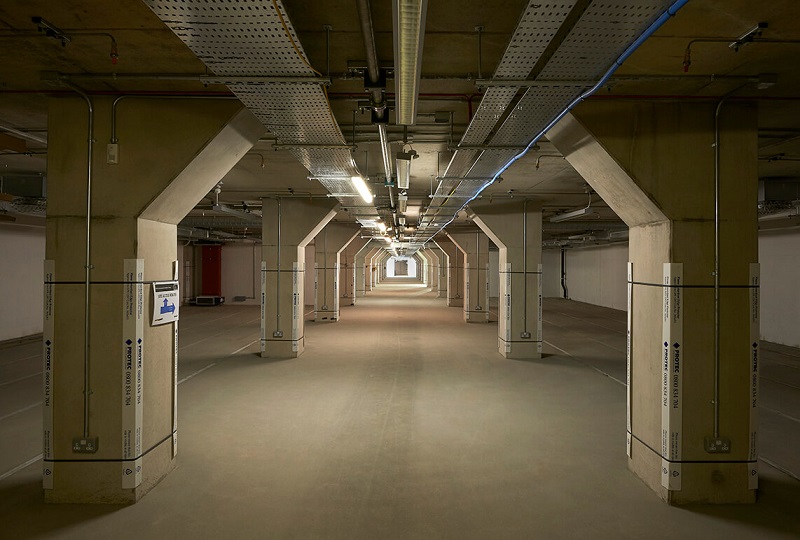 This article was originally published here by RSHP.

Retrieved from "https://www.designingbuildings.co.uk/wiki/British_Museum_World_Conservation_and_Exhibitions_Centre"
Create an article