Heathrow Terminal 5 at Heathrow Airport, London's main airport, was designed to handle 35 million passengers a year. The construction of a fifth terminal at Heathrow was seen as critical to maintaining the airport's position as the busiest in Europe, and was the subject of a limited competition in 1989. Construction began in 2002 and the terminal finally opened in 2008, having cost £4 billion.

The building's leading architects were Richard Rogers Partnership (now RSHP) and production design was completed by aviation architects Pascall+Watson. The engineers for the structure were Arup and Mott MacDonald.

The passenger areas at Terminal 5 are on one level, with plant rooms, baggage handling and other ancillary functions below, though passenger areas extend over two levels at both edges of the building.

The main terminal building is the largest free-standing structure in the UK. It measures 396 m (1,299 ft) long, 176 m (577 ft) wide and 40 m (130 ft) tall. The four-storey building is covered by a single-span, dynamically-curved, steel-frame roof, with glass facades in bands angled at 6.5º to vertical, flooding the interior with daylight.

The roof is the size of five football pitches, with each section weighing 2,200 tonnes.It is supported by slim columns at the perimeter, maintaining a highly flexible and visually dramatic internal space.

The building is effectively a progression of spaces, which vary in height according to their function. The structure is strongly expressed, with great structural 'trees' supporting the roof. The unencumbered, long-span 'envelope', developed with Arup, has a flexibility of internal space that is conceptually similar to Richard Rogers' earlier designs for the Centre Pompidou.

Contained within freestanding steel-framed structures inside the building are departure and arrivals areas, check-in desks, commercial space, retail, offices, passenger lounges, back-up and other facilities. These can be dismantled and reconfigured as future needs change.

As well as the design of the main terminal building, RSHP were responsible for the design of two satellites and Heathrow’s new control tower, which became operational in 2007.

The main terminal, its satellite buildings, and the new control tower are all part of a wider T5 campus development that includes a landscaped motorway link from the M25, the creation of two new open rivers from previously culverted channels under the airport, the construction of more than a square kilometre of taxi-ways and aircraft stands, three rail stations (for the Piccadilly line, Heathrow Express, and overland rail), an airside track transit system, and an airside road tunnel connecting directly to Heathrow’s central terminal area.

Aircraft load and unload at stands on the core building, as well as at two satellites served by a rapid-transit system. Provision is made for an underground and mainline rail link from central London, contained in deep tunnels.

Natural ventilation was impractical because of noise and air pollution from aircraft but the design adopts an energy-efficient strategy using a displacement air-conditioning system developed by Arup and shading by means of canopies and low eaves to reduce solar gain on the long east and west elevations. 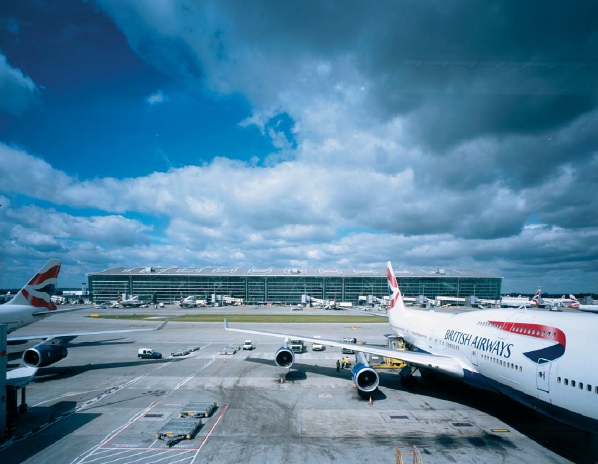 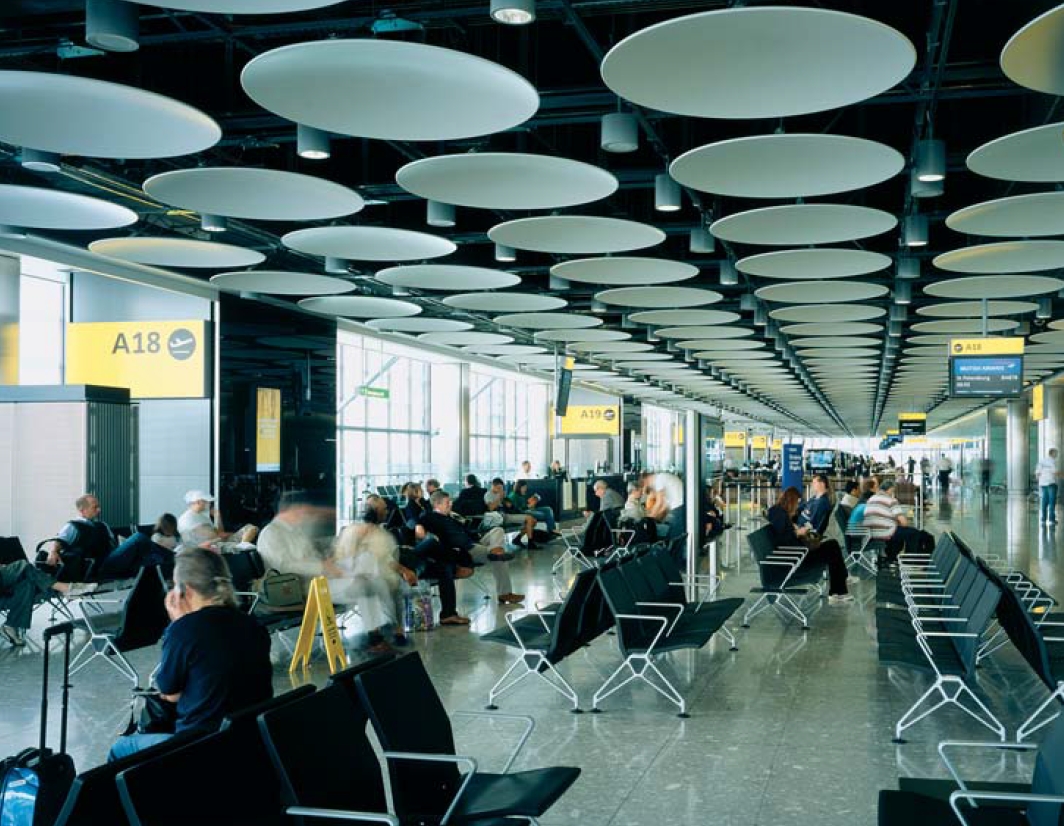 Retrieved from "https://www.designingbuildings.co.uk/wiki/Heathrow_Terminal_5"
Create an article