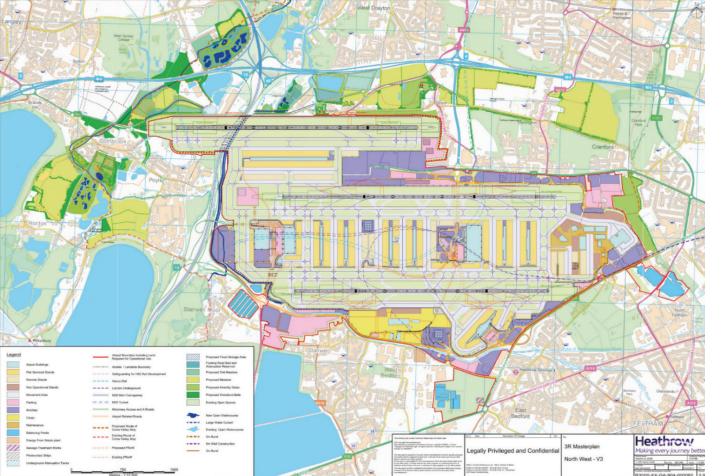 In 2015, the Airports Commission concluded that a new north-west runway at Heathrow Airport was the best solution to a perceived need for additional air capacity. In October 2016 the government agreed with this conclusion. There were then two national consultations during 2017.

On 5 June 2018, Chris Grayling MP, Secretary of State for Transport made a statement to Parliament setting out final proposals for an Airports National Policy Statement (NPS) signalling a commitment to the expansion of Heathrow Airport with the creation of the new north-west runway.

He pointed to the fact that the UK has one of the largest aviation sectors in the world, contributing £22 billion to GDP, supporting half a million jobs, servicing 285 million passengers, and transporting 2.6 million tonnes of freight in 2017. He claimed that expansion at Heathrow would give a boost of up to £74 billion to the wider economy, providing better connections to growing world markets, and increasing flights to more long haul destinations.

The NPS includes measures to limit some of the likely impacts of the expansion, including £2.6 billion towards compensation, noise insulation and improvements to public amenities. In addition, transport connections will be strengthened by future improvements to the Piccadilly Line, new links to Heathrow through Crossrail, connections to HS2 via an interchange at Old Oak Common and plans for western and southern rail access.

Heathrow will now develop details of the scheme design and airspace change, and hold a further consultation.

The planning system will then involve two processes, one to set the policy (the NPS), and then, if parliament votes in favour, a second process for obtaining development consent. This will include public examination by the planning inspectorate.

Len McCluskey, General Secretary at Unite said; “Heathrow expansion, one of the biggest construction projects in Europe, answers the demands of many Unite members across the UK – for more skilled, well-paid and sustainable jobs. Expansion will deliver these jobs and growth to every nation and region of the UK.”

Labour Leader Jeremy Corbyn said; "Yes, there is a demand for increased airport capacity across the south east, two of the south east airports are working somewhat under capacity, Stansted and Luton. Gatwick and Heathrow are working at pretty well max capacity, let's look at it in that context."

However, the announcement was not without its critics. Former Transport Secretary Justine Greening said; "Why should people who are living in Newcastle spend hours travelling down to London, then fly out somewhere else... There is nothing national about this national policy statement. It is just a runway in Heathrow."

Shadow Chancellor John McDonnell tweeted; "...I remain implacably opposed to expansion at Heathrow and after listening to the transport minister, Chris Grayling, today I am even more convinced that this would be a costly, environmental and social disaster that will never be built."

Liberal Democrat Leader Sir Vince Cable described the proposals as an "expensive folly", and opponents to the scheme have threatened legal action.

In August 2018, the environmental campaign group Friends of the Earth became the fifth litigant to file a suit against the Heathrow expansion plans. They have challenged the legal basis of the government's decision to designate the airport's national policy statement (NPS), which they say does not take account the UK's climate change obligations or the likely impact on future generations.

According to Friends of the Earth, the NPS fails to take account of domestic targets for greenhouse gas emission reduction under the Climate Change Act 2008, and does not consider the Paris Agreement objective of limiting global warming to 1.5ºC. In addition, the NPS fails to address the likely non-CO2 impacts of a third runway such as nitrogen oxide emissions.

Others who have filed suits against the development include; the Mayor of London and a coalition of local authorities, Heathrow Hub (a rival scheme promoter), Plan B (a climate change charity), and Greenpeace.

A decision about whether a full hearing will take place is expected later in 2018.

On 1 May 2019 the High Court ruled in favour of the government and against five claimants seeking judicial review of the Airports National Policy Statement.

On 27 February 2020, plans for the third runway were thrown into doubt when the Court of Appeal ruled that the government’s decision proceed with the project was unlawful unless it could be made to comply with climate change commitments.

On 16 December 2020 the Supreme Court set aside the ruling of the Court of Appeal, finding that the decision to proceed with the project was lawful. Following this, Good Law Project and Ecotricity CEO Dale Vince threatened to take the government to court if it did not update its airport planning policy to reflect the UK's 2050 net zero emissions target.

Retrieved from "https://www.designingbuildings.co.uk/wiki/Heathrow_Airport_expansion"
Create an article