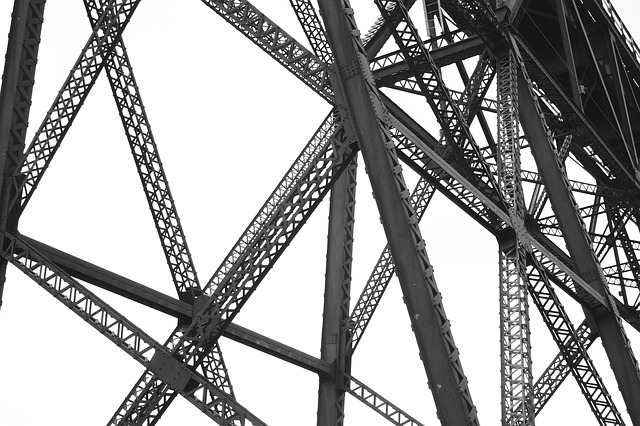 Structural steelwork can be used to form the 'skeleton' frame of a building or other built asset, typically consisting of vertical columns and horizontal beams which are riveted, bolted or welded together in a rectilinear grid.

This grid of beams and columns can then be used to support the building’s floors, roof, walls, cladding, and so on.

Steel frame construction is commonly used in high-rise, industrial, warehouse, residential buildings and so on. Its advantages include:

Types of steel frame construction include:

Hot-rolled steel is commonly used to form steel beams and columns. They are created by passing heated steel between large rollers, which deform it into the required shape, such as H, I, W, S and C shapes, angles, tubes, and so on.

As steel softens at high temperatures, which can cause structural collapse, frames require some form of fire protection. They may be encased in masonry, concrete or plasterboard, or sprayed with an insulating coating. Steel is also prone to corrosion in humid climates or marine environments.

The addition of bracing to a steel frame increases its stability against lateral loads such as wind loading and seismic pressure. The members in a braced frame are generally also made of structural steel, which can work effectively both in tension and compression. For more information, see Braced frame.

Portal frames are a type of structural frame, that, in their simplest form, are characterised by a beam (or rafter) supported at either end by columns, however, the joints between the beam and columns are 'rigid' so that the bending moment in the beam is transferred to the columns. This means that the beam can be reduced in sectional size and can span large distances. For more information, see Portal frame.

Retrieved from "https://www.designingbuildings.co.uk/wiki/Steel_frame"
Create an article

Gereja Ayam (aka the Chicken Church)

The idea for the structure emerged from the architect's dream.

Making adjustments to flues and chimneys

Product can be 'grown' into bricks or used as a self-healing building material.