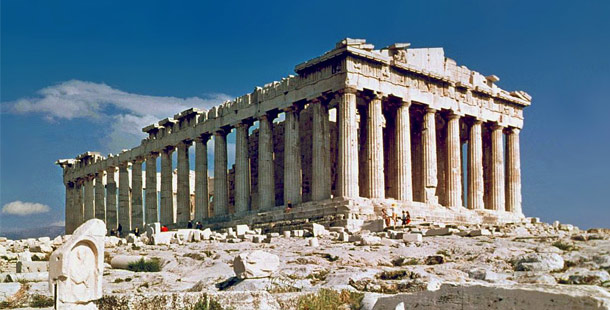 The Parthenon is on the hill of the Acropolis in Athens, Greece. It is widely considered to be one of classical architecture’s finest achievements. It was built in the mid-5th century BCE by the Athenian statesman Pericles, to be the chief temple of the Greek goddess Athena. The architects Ictinus and Callicrates designed the temple under the supervision of the sculptor Phidias to be the culmination of the Doric order of architecture.

The Parthenon was constructed from 22,000 tonnes of white marble, quarried and then hauled ten miles to the site using carts, pulleys and sledges. At the time it was the first temple, as the largest, in mainland Greece to be built entirely using marble. Work began in 447 BCE, and the main elements of the building were completed by 438, however, work on the exterior decoration continued until 432 BCE.

Although it has suffered much damage over the centuries, including the loss of most of its sculptures, its basic form remains intact, making it one of the world’s most iconic structures and an internationally-recognised symbol of Greece. As well as being a major tourist attraction, it has been celebrated by many, from Plutarch in the first century AD who described it as ‘no less stately in size than exquisite in form’, to Le Corbusier who called it ‘the basis for all measurement in art’.

The Parthenon sought to depart from the more plain architectural style known as the Doric order. Whereas traditionally, Doric colonnades would consist of six columns across the front and thirteen down the sides, the Parthenon was built with eight fluted, baseless columns at the front and seventeen at the sides. Measured from the top step of the base, the building is 30.89 m (101.34 ft) wide and 69.54 m (228.14 ft) long.

By expanding the scale, an unprecedented amount of sculptural decoration could be included. The columns support an entablature consisting of a plain architrave and a frieze of alternating triglyphs and metopes. Including a bas-relief frieze around the entirety of the temple’s inner chamber (cella), an element more typical of the Ionic order, this was another radical departure from previous architectural tradition.

The metopes depict scenes from mythic battles; gods strike down giants on the east front, Greeks triumph over Amazons on the west, Trojans on the north, and men fight centaurs on the south. The east and west pediments also originally incorporated many sculptural features, although little of these remain today.

The Parthenon is remarkable for the fact that it includes almost no straight lines. Both the entablature and the base platform curve upward at the centre, the metopes lean outward, and the columns slightly swell in the centre. The intention of these ‘optimal refinements’ has been the subject of some conjecture. 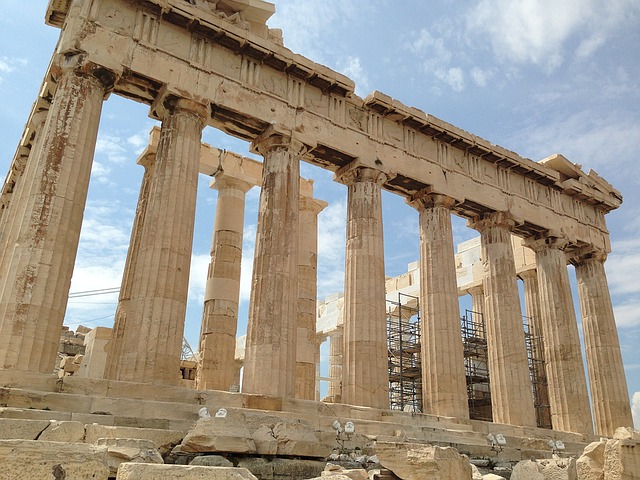 The Parthenon stood intact until the 5th century CE, when the temple was transformed into a Christian church, with icons painted on the walls, inscriptions carved into the columns, and many sculptures removed.

In 1458, invading Ottoman Turks seized control of the Acropolis and adopted the Parthenon as a mosque, raising a minaret at the southwest corner. Serious damage was also sustained in 1687 during fighting between the Venetians and the Turks when an explosion blew out the central portion and destroyed much of the cella’s walls.

Between 1801 and 1803 a large part of the sculpture that remained was removed, with Turkish permission, by the British nobleman Thomas Bruce (Lord Elgin) and sold in 1816 to the British Museum in London. The ‘Elgin marbles’ as they are known, have been the subject of much controversy in recent years, as Greek and British officials attempt to come to some kind of resolution over whether to return them to Greece or retain them in London. Other sculptures from the Parthenon remain in the Louvre Museum in Paris, in Copenhagen, and elsewhere.

Retrieved from "https://www.designingbuildings.co.uk/wiki/Parthenon"
Create an article