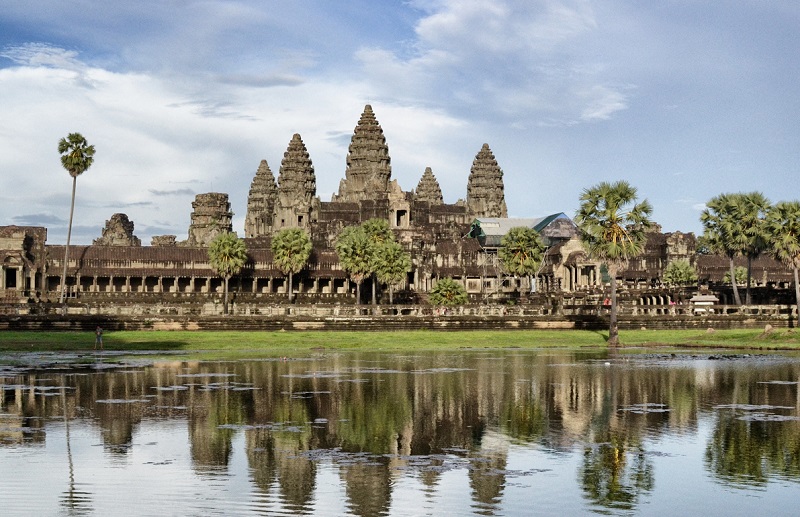 Angkor Wat is a religious temple complex in Cambodia. At 402 acres, it is the largest religious monument in the world, and is considered to be the finest classical example of Khmer architecture, a building tradition that spanned the 9th and 15th centuries AD during the reign of the Khmer Empire.

King Suryavarman II began the construction after ascending to the throne in 1113. It is not known who the architects or designers were. Originally, it was built as a Hindu temple of the god Vishnu. Reflecting this, the temple faces west in contrast with many of the other temples at Angkor. However, towards the end of the 12th century it was transformed into a Buddhist temple.

Over the course of the 20th century, Angkor Wat became more well-known globally as a symbol of Cambodia, and today it is the country’s main tourist attraction. 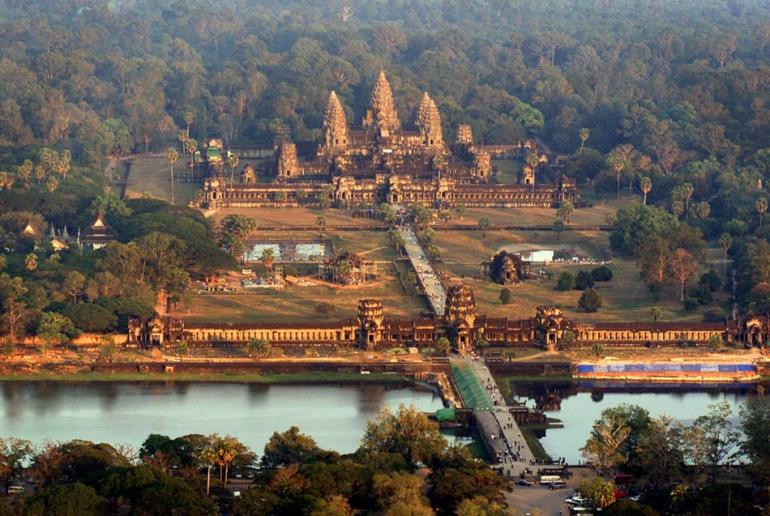 The temple complex is surrounded by a 190m-wide moat forming a 1.5km by 1.3km rectangle. A sandstone causeway crosses the moat on its western side. The stylistic elements of the complex are characteristic of Khmer architecture and include the ogival, lotus bud-shaped towers, half-galleries, axial galleries, connecting enclosures and cruciform terraces.

The main pyramid takes the form of three stepped terraces with covered galleries bordering all sides of each step. The corners of the second and third steps are punctuated by towers, the highest of which rises to 55m.

At the time of its construction, Khmer architects were proficient in the use of sandstone as a building material, and the complex was constructed using 5-10 million sandstone blocks, each weighing up to 1.5 tons. These blocks were quarried from the mountain of Phnom Kulen, more than 50km away, and were floated on rafts down the Siem Reap River. Inscriptions record that the construction involved 300,000 workers and 6,000 elephants.

The sandstone blocks form the most visible elements of the structure, while a type of clay local to the area, laterite, was used for the outer wall and concealed structural elements. The precise binding agent for the blocks is unknown, although it is believed to be natural resin or slaked lime.

Internally, the smooth stones were laid with very tight joints without mortar, held together instead by mortise and tenon joints, or by dovetails and gravity. It is believed the blocks were assembled using a combination of elephants, coir ropes and pulleys, and bamboo scaffolding.

Angkor Wat is famous for its vast array of symbolic detailing. Nearly 2,000 sq.m of bas reliefs are intricately carved into the sandstone,as well as extensively carved lintels, friezes and pediments, and nearly 2,000 depictions of apsaras (celestial dancers). 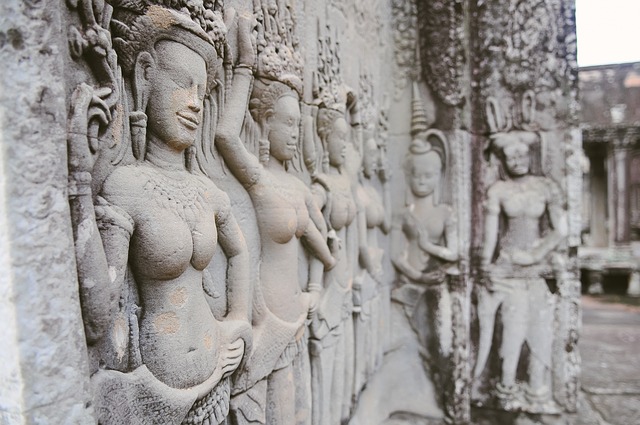 After King Suryavarman II’s death, the temple was converted to Buddhist use by King Jayavarman VII. Western interest in the temple only really began with the writings of the French naturalist Henri Mouhot in the 1860s.

Conservation work was started by the French in the early-20th century and continued over the decades in an attempt to preserve the structure from damage caused by plant growth, fungi, ground movement, war and looting. Conservation efforts were halted for around 20 years during the Cambodian civil war and the rise to power of the Khmer Rouge.

In 1992, Angkor Wat became a UNESCO World Heritage Site, and teams from around the world have returned to stabilise and preserve it. In particular, they have worked to tackle microbial biofilms which degrade sandstone. Extensive conservation works have replaced and restored some of the sculptures which were lost or damaged.

Retrieved from "https://www.designingbuildings.co.uk/wiki/Angkor_Wat"
Create an article