The Forbidden City in the centre of Beijing, was the Chinese imperial palace between 1420 and 1912. As the ceremonial and political centre of Chinese government it served as the home of 24 emperors.

Construction began in 1406, when Zhu Di became the Yongle Emperor and moved the capital from Nanjing to Beijing. By the time it was completed in 1420, the complex covered more than 180 acres and included 980 buildings.

The Forbidden City, as its name suggests, was not generally open to the masses. The Outer Court (the southern part of the complex), with its expansive courtyards and monumental pavilions, was used for public audiences and ceremonies; while the Inner Court (northern part) contained residences for the royal family, servants, and so on.

The complex has influenced cultural and architectural styles across East Asia and beyond. In 1987, it was declared a World Heritage Site, and listed by UNESCO as the world’s largest collection of preserved wooden structures. 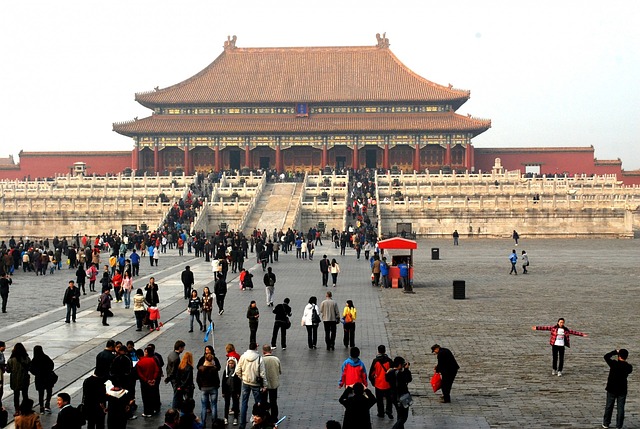 The Forbidden City was designed and built in a way that typifies traditional Chinese palatial architecture, with the emphasis on articulation and bilateral symmetry to signify balance.

Classical Chinese buildings typical emphasise breadth rather than height, particularly those of the wealthy. They often feature an enclosed, heavy platform, covered with a large roof that appears to 'float' because of the lack of emphasis on the supporting vertical walls.

The Forbidden City has a great deal of red because this is a color that is seen as lucky.

The halls and palaces have relatively low ceilings compared with similar western architecture. 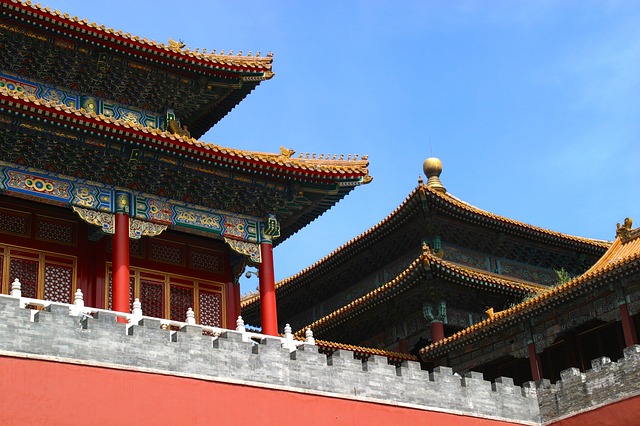 One of the most famous features is the Wu (Meridian Gate), the imposing 38 m (125 ft) high southern entrance. This opens onto a large courtyard through which the Golden River runs, crossed by five white marble bridges.

Adjacent to the three halls of the Inner Court, the 3 acre Imperial Garden offers a place of relaxation.

The structures are largely made from timber logs from the jungles of south-western China, and large blocks of marble. Baked ‘golden’ bricks were used to pave the floors of several of the more important halls. The roofs include yellow glazed tiles, the colour of the Emperor.

Since completion in 1420, 14 Ming emperors and 10 Qing emperors used the complex as their imperial palace. However, with the abdication of Puyi in 1912, its role as the political centre of China came to an end.

Despite having abdicated power, Puyi remained in the Inner Court until 1924 when he was evicted following a coup. In 1925, a Palace Museum was established, and took control of the Forbidden City.

With the revolutionary action that established the People’s Republic of China in 1949, the complex incurred some damage, although further destruction was prevented during the Cultural Revolution as an army battalion was charged with keeping it safe.

Today, the Palace Museum contains an extensive collection of artwork and artifacts, including the imperial collections of the Ming and Qing dynasties. As such, it is the most visited art museum in the world, with 14.6 million visitors a year.