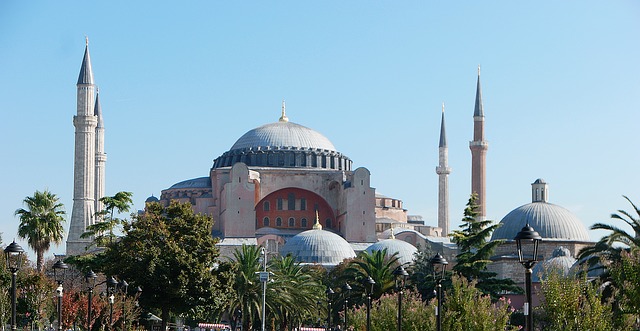 Hagia Sophia (from the Greek `Αγiα Σοφiα - Holy Wisdom) is a religious monument of the Byzantine empire, located in Istanbul, Turkey. It is considered to be one of the most important architectural achievements in the world and is an iconic example of Byzantine architecture due largely to its dome which was a significant innovation at the time.

Hagia Sophia was the world’s largest cathedral for nearly a thousand years until the completion of Seville Cathedral in 1520. It was listed by UNESCO as a World Heritage Site in 1985.

Dating back to A.D. 532, the cathedral originally served as a Greek Orthodox Christian church and the seat of the Patriarch of Constantinople. When Constantinople was invaded by the Ottoman Turks in 1453, it was converted into an imperial mosque. In 1935, the founder of the Republic of Turkey, President Ataturk, changed it into a secular museum, but, in 2020, President Erdogan converted Hagia Sophia back into a mosque again.

In A.D. 532, Emperor Justinian I built a basilica on the site of two previous churches that originated from around A.D. 346 but had been destroyed by fire.

The church was constructed using ashlar and brick. It is rectangular in shape with a vast square nave measuring 31 m (102 ft). The nave is covered by a central dome, which at its highest is 55.6 m (182.5 ft) above floor level, making it one of the largest in the world. The dome rests on four pendentives - an innovative development for the time. For more information, see Pendentive dome.

The original construction was completed in just five years, in A.D. 537. However, it was flawed as more mortar was used than brick, which weakened the walls. The weight of the dome then caused the walls to lean outward and eventually to collapse following an earthquake in A.D. 558. When it was rebuilt five years later, the dome was raised by around six metres so that the lateral forces would be less and the weight could be transferred more easily down into the walls. In total, 40 ribs were incorporated that extend from the top to the base, allowing the load of the structure to transmit between the windows to the pendentives.

The distinctive illumination of the nave interior is achieved by the 40 arched windows that are built around the arcade at the base of the dome. Arched openings at the west and east of the church are extended by half domes. The building has two levels – a ground floor and a gallery, a common feature of Byzantine churches. 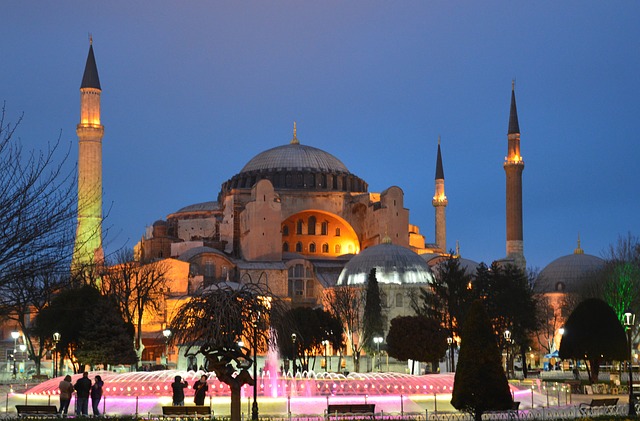 Four 60m (200ft)-tall minarets were added at each corner after the 15th century mosque conversion, one of which was constructed using red brick, and the other three using white limestone and sandstone. Over the centuries, the interior was adorned with many elaborate golden mosaics, icons and decorations, however many of these were plastered over.

A major restoration programme was carried out between 1847 and 1849, in which columns were straightened, the dome and vaults consolidated, the decorative features revised, and the minarets repaired and altered to make them of equal height. When the building was converted into a museum in 1935, white plaster was removed from the interior, revealing many concealed mosaics and marble decorations.

By the 1990s, the structure was in need of further repair due to rising ground water and moisture penetration that was rendering the brick and stonework unstable. By 2006, the dome had been fully repaired and the mosaics preserved under the guidance of the World Monuments Fund.

Today, the Hagia Sophia is one of the most iconic religious monuments in the world and a popular tourist attraction, with approximately 3.3 million visitors a year.

Retrieved from "https://www.designingbuildings.co.uk/wiki/Hagia_Sophia"
Create an article