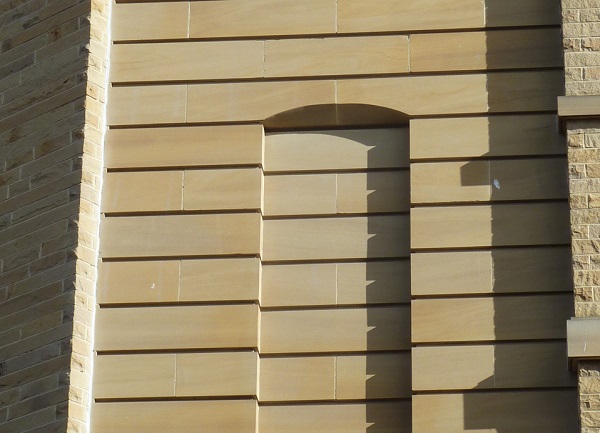 Ashlar is a type of masonry which is finely cut and/or worked, and is characterised by its smooth, even faces and square edges. It can also be used to refer to an individual stone that has been finely cut and worked until squared.

Ashlar has been used in construction as an alternative to brick or other materials dating back to classical architecture, where it was often used to contrast with rustication (masonry with a purposefully rough or patterned surface).

Courses of ashlar can be horizontal, with blocks laid in parallel, or may be random with deliberately discontinuous vertical and horizontal joints.

Since ashlar blocks are precisely cut on all faces which are adjacent to other masonry, very thin joints can be achieved. The face of the block away from joints may be left rough and unpolished (known as quarry-faced), or may be polished or rendered decoratively. Mason’s drag is a form of decoration used on softer stone ashlar which involves small grooves applied by a metal comb-like device.

Mortar, or another joining material, is used to bind ashlar blocks together. Other methods of assembly such as metal ties can be used, in a process known as dry ashlar. Such a technique can be seen in the Inca architecture of Cusco and Machu Picchu.

In the UK, ashlar walling can be found in many historic buildings; one notable example being the Royal Crescent in Bath. It is also becoming more popular as a form of exterior cladding in urban commercial developments.

Retrieved from "https://www.designingbuildings.co.uk/wiki/Ashlar"
Create an article