A mosaic is an artistic composition made up of small, squarish, coloured elements (tesserae) which can be stone, glass, ceramic or other materials. Due to the durability of the materials generally used, mosaics can be placed outdoors as well as indoors, used on both walls and floors, and some have survived for millennia even when buried beneath the ground.

Making mosaics is an ancient art that has been practised throughout history. Today, contemporary mosaics are seen in public places, on the outside of buildings, in bathrooms, playgrounds and parks.

The word ‘mosaic’ is thought to derive from ‘Moses’, specifically when he descended from the mountain with the 10 commandments inscribed on tablets of stone which he then shattered into many pieces.

Although mostly associated with Roman floors, the use of mosaics extends as far back as the Sumerians of ancient Mesopotamia (now Iraq) in the third millennium BC. These early examples comprised arrangements of coloured clay pegs pressed into wall surfaces. Mosaics were also developed by the Aztecs and Mayas of Central America.

The ancient Egyptians used small fragments of semi-precious stones and other materials to decorate walls and inlay furniture. However, the forbears of what are today considered as mosaics were the coloured stones and pebbles used by the ancient Greeks to create permanent designs.

That art was further developed by the Romans who used natural stones cut into more regular cubes. The Romans depicted a wide variety of subject matter and style in their mosaics, ranging from geometric arrangements and ancient gods, to everyday objects and the natural world. Many examples of Roman wall and floor mosaics – still in very good condition – are to be found in countries that once formed part of the Roman Empire.

Mosaics also formed an important aspect of Byzantine art and from the fourth century AD were used chiefly for religious purposes to depict Christ, the Virgin Mary and other saints. Byzantine mosaics tended to be highly luminous and characterised by the extensive use of gold-coloured tesserae with gold and silver leaf sandwiched between the layers of glass. The Byzantines innovated with a new type of tessera made of glass and called ‘smalti’ which would dominate Byzantine mosaics and gave artists a new range of luminous colours. Setting the pieces at varying angles into the mortar bed enhanced the reflectivity of the glass. Mosaics also formed an important component of Islamic art which focused almost exclusively on geometric designs.

In the following centuries, mosaics were to a large extent superseded by fresco painting but when used were often copies of paintings – a practice which continued into the 20h century.

The Art Nouveau movement created a revival of interest in mosaic making as an artistic medium and focused on pattern and simplified, stylised forms. Modernism further boosted the art, particularly the works of the late 19th century Catalan architect Antonio Gaudi who covered large expanses of external walls and park sculptures with his take on the mosaic. These comprised large, irregular, brightly-coloured ceramic pieces. 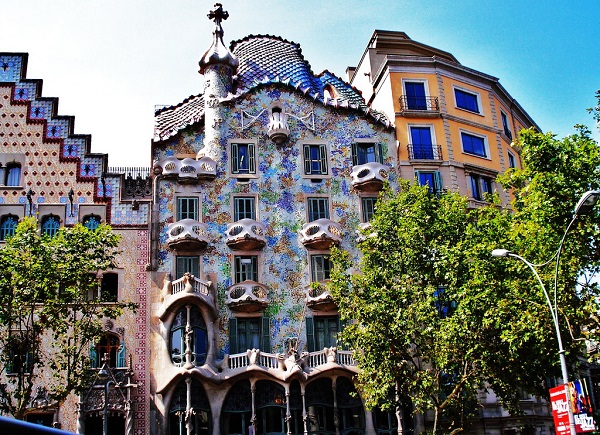 There is a wide variety of material from which to make the tesserae, including:

Although mosaic tesserae were traditionally embedded into cement, today there are numerous backing possibilities, including wood, plaster, ceramics, terracotta and fibreglass. One of the most common methods is to place the tesserae onto a very thin bed of tile adhesive: this can be cement based, white PVA glue or epoxy resin glue, using just enough to ensure that when pressed into the cement it does not rise into the joints.

Grout (available in different colours) is used to fill the gaps between the tesserae – this strengthens the mosaic and can make it waterproof. The grout should have different qualities to the adhesive. Any excess grout should be wiped off immediately with a damp cloth.

Retrieved from "https://www.designingbuildings.co.uk/wiki/Mosaic"
Create an article