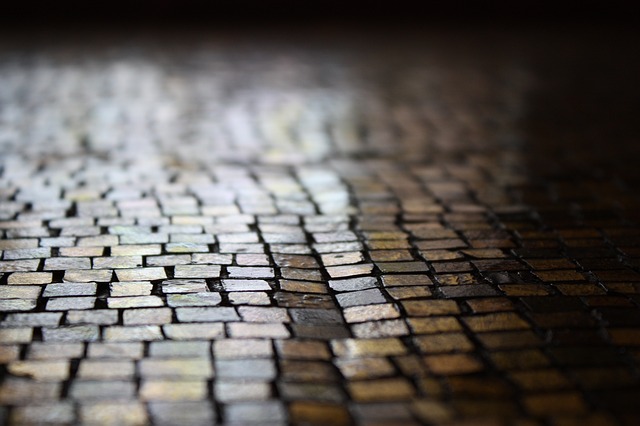 Tessera, often known by its plural, tesserae, is the term for an individual tile used in decorative mosaics. They are usually cubic and made of stone, glass, ceramic or other hard materials.

By 200 BC, the earliest forms of tesserae, made from marble and limestone, had replaced natural pebbles in the mosaics created by Hellenic builders. Roman mosaics, used to decorate both panels and floors, tended to use stone cut into small cubes and arranged in designs and geometric patterns.

At around the same time, tesserae made of smalto (coloured glass) began to be produced to provide mosaics with colours that could not be found in natural stone. Between the first and third centuries AD, glass tesserae started to be used for wall mosaics as they were not required to be as durable as floors, for which stone still tended to be favoured.

A variation of glass tesserae were made with thin plates of gold or silver sandwiched between two slabs of molten glass and cut into cubes. These were a common feature in Early Christian and Byzantine mosaics.

Ceramic tesserae became common in the Middle Ages, later rivaling glass as a major material in modern mosaics. As well as ceramic, other materials that have been used to form tesserae include shell, painted stone, terracotta, enamel and mother-of-pearl.

Retrieved from "https://www.designingbuildings.co.uk/wiki/Tessera"
Create an article