Aesthetics is a branch of philosophic study that relates to the nature and expression of beauty and taste; in other words, the appearances of things. It is derived from the Greek word ‘aisthetikos’, which refers to sensory perception and understanding or sensuous knowledge. As aesthetics concerns an appreciation of beauty, it is influenced by the subjective taste of an individual.

The Aesthetic movement (also known as Aestheticism) was a school of intellectual thought that emerged in England in the 1800s. The movement spread to Europe and North America in the late 1800s and became associated with a cultural approach that influenced fine art, music, literature, interior design, decorative arts and architecture on an international scale.

Seen as a distinct contrast to artistic movements that incorporated and highlighted the social and political themes of the times, the Aesthetic movement emphasised beauty and aesthetic values. In the fine arts it was associated with the phrase ‘art for art’s sake’.

[edit] The philosophy of Aestheticism

According to the tenets of Aestheticism, literature, painting and music were about beauty, nature and sensuality. Philosopher Emmanuel Kant suggested that rather than relaying messages about morality or other traditional beliefs, Aesthetic art existed solely to be beautiful.

The poet and playwright Oscar Wilde was an advocate for the Aesthetic movement. Tutored by art critics Walter Pater and John Ruskin, Wilde captured the essence of Aestheticism both in its literary form and as a vehicle for graphic design and interior design. His manuscripts were illustrated by some of the leading figures in the movement (such as Aubrey Beardsley, whose drawings for Wilde’s play, Salomé, were so scandalous that some were only printed privately), and in life, he was described as an Aesthetic. 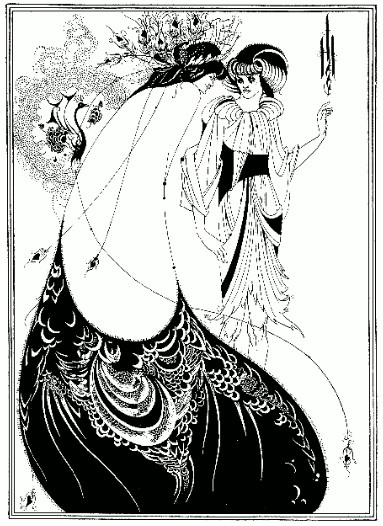 During a tour of North America, Wilde delivered lectures on Aestheticism and good taste - impressing upon his audiences the importance of the new "English Renaissance in Art" and interior decoration. While his manner and delivery could be charming, scandals about his private life tarnished his reputation. In some instances, Wilde did not find his audiences terribly receptive.

[edit] Elements of the exotic in architecture and decor

Despite Wilde's observations, the Aesthetic movement did experience a degree of success in the form of architecture and decoration. On the outside, many of the residences built for followers of the Aesthetic movement were somewhat understated. Functionality was still a priority, although everything about the home had the potential to be treated as an artistic object. That became particularly apparent in interior decor and furnishings, which were created as an eclectic mix of styles, cultures and materials.

The Holland Park home of the British painter Frederic Leighton is an example of this mixture of restrained and exotic styles. Designed by George Aitchison, the exterior of the structure is simple and classical in style, but just inside the front entrance is an eye dazzling two-storey Arab Hall displaying Leighton's collection of tiles gathered during his travels to the Middle East. 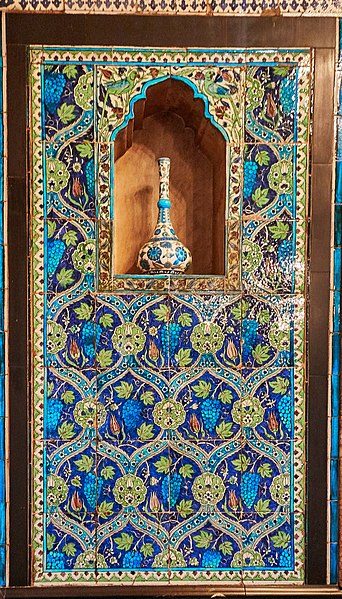 Tile work from the Arab hall in Lord Leighton's house displays a small sampling of his collection.

In the decorative arts and interior design, the Aesthetic movement features several recurring motifs: nature is a centrepiece and useful items can be beautiful. Flowers, leaves, insects, birds (especially peacocks), spider webs and sunbursts are frequently featured in furniture design and decor. Decorative hardware, ceramic tiles, hinges, doorknobs and wallpaper are also good examples of the decorative arts where the focus is on the beauty of useful items.

Also apparent are Eastern influences. These appear in furniture made from ebonised wood with gilt decorations and blue and white china, crockery and other porcelain objects. 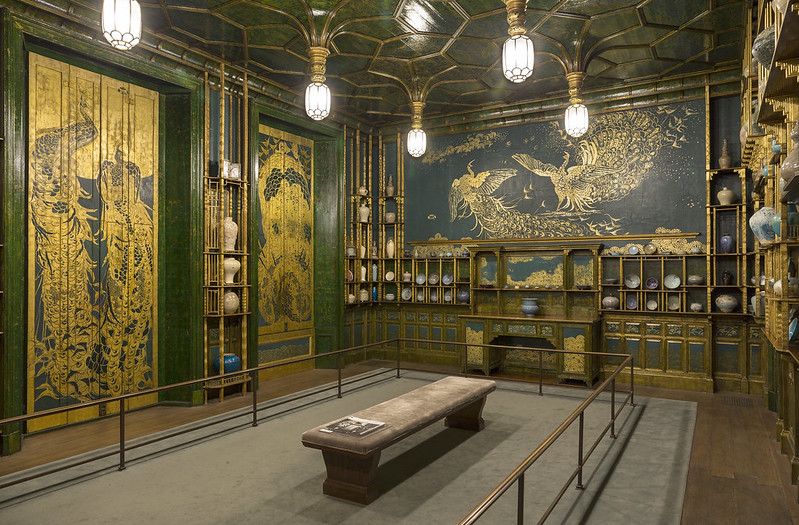 The Peacock Room is one of the most noteworthy examples of interior decoration from the Aesthetic movement. Designed by James Abbott McNeill Whistler for the shipping tycoon Frederick Leyland, the Peacock Room features a large scale frieze of stylised peacocks, gold on turquoise blue, that wind around the walls of the dining room.

[edit] Aesthetics and women as consumers and creators

For women (particularly middle class women), the Aesthetic movement was initially a marketing opportunity. Households with extra spending money were the ideal place for women who may be inclined to purchase new trinkets and “useful” but beautiful items.

Over time, women became involved in the creation of Aesthetic decorative items. Some attended art schools and were recognised for their talents. Others applied their skills to homemade tapestries or other creative outlets. For instance, Jane Burden, the wife of William Morris, and her sister Elizabeth Burden were English embroiderers who were essential to textile development at Morris, Marshall, Faulkner & Co.

Recognising the significance of the Aesthetic Movement, British designer William Morris (also a follower of the art critic John Ruskin) felt it was essential for beauty to be available to all in the form of well crafted products. He and his followers built upon the Aesthetics' appreciation, but Morris lessened the emphasis on pure beauty and instead focused on the relationship between art, labour and society. In the development of the Arts and Craft movement, Morris put Ruskin’s theories into practice, placing a high value on work, the pleasure derived from high-quality craftsmanship and the natural beauty of materials.

Retrieved from "https://www.designingbuildings.co.uk/wiki/Aesthetic_movement"
Create an article