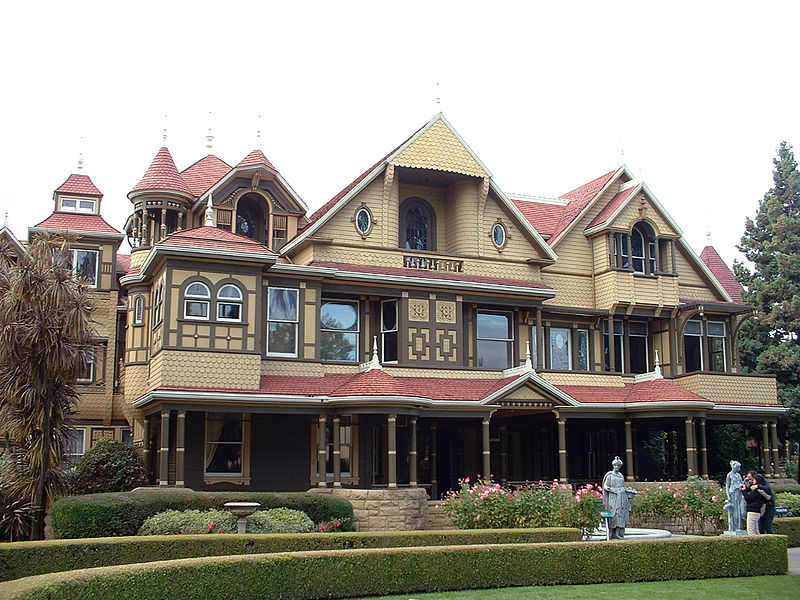 In San Jose, California, there is a Queen Anne style mansion that looks innocent enough from the outside - but on the inside is a strange collection of rooms, stairways, skylights, fireplaces and other assorted architectural elements. Some of these have no obvious purpose and are not even aesthetically attractive or relevant, but others are linked to the strange beliefs of the home’s owner, Sarah Pardee Winchester.

The Winchester House (also referred to as the Winchester Mystery House) is associated with tragedy. It is also steeped in supernatural lore fed by its eccentric owner, who was said to be haunted by spirits.

Sarah Pardee was born in 1839 in New Haven, Connecticut. In 1862, she married William Wirt Winchester, the son of the owner of the Winchester Repeating Arms Company. The couple had a daughter in 1866, but the child died less than two months later. Then in 1881, Sarah’s husband died of tuberculosis, leaving her the recipient of a significant inheritance along with part ownership in the Winchester company.

As a wealthy, grieving widow, Sarah looked for ways to direct her energy. Shortly after her husband’s death, she consulted with a medium who informed her that the spirits of those killed by Winchester rifles - the source of her fortune - were haunting her family. The medium instructed Sarah to head west and build a house for the spirits, who would no longer bother her as long as construction remained continuous.

Although it is possible she was simply seeking a change of location and a hobby during her lengthy depression, Sarah took the advice of the spiritualist and moved to San Jose, California. In 1884, she began work on a renovation project that would continue until her death in 1922.

The project started as an unfinished, two-story farmhouse called Llanada Villa. As work continued over 38 years, the modest eight room house grew into an eccentric mansion featuring 161 rooms, 52 skylights, 47 stairways, 47 fireplaces (but only 17 chimneys) and six kitchens. Sarah would fill it with design curiosities and innovations (many ahead of their time) while living with its rumoured paranormal activity. 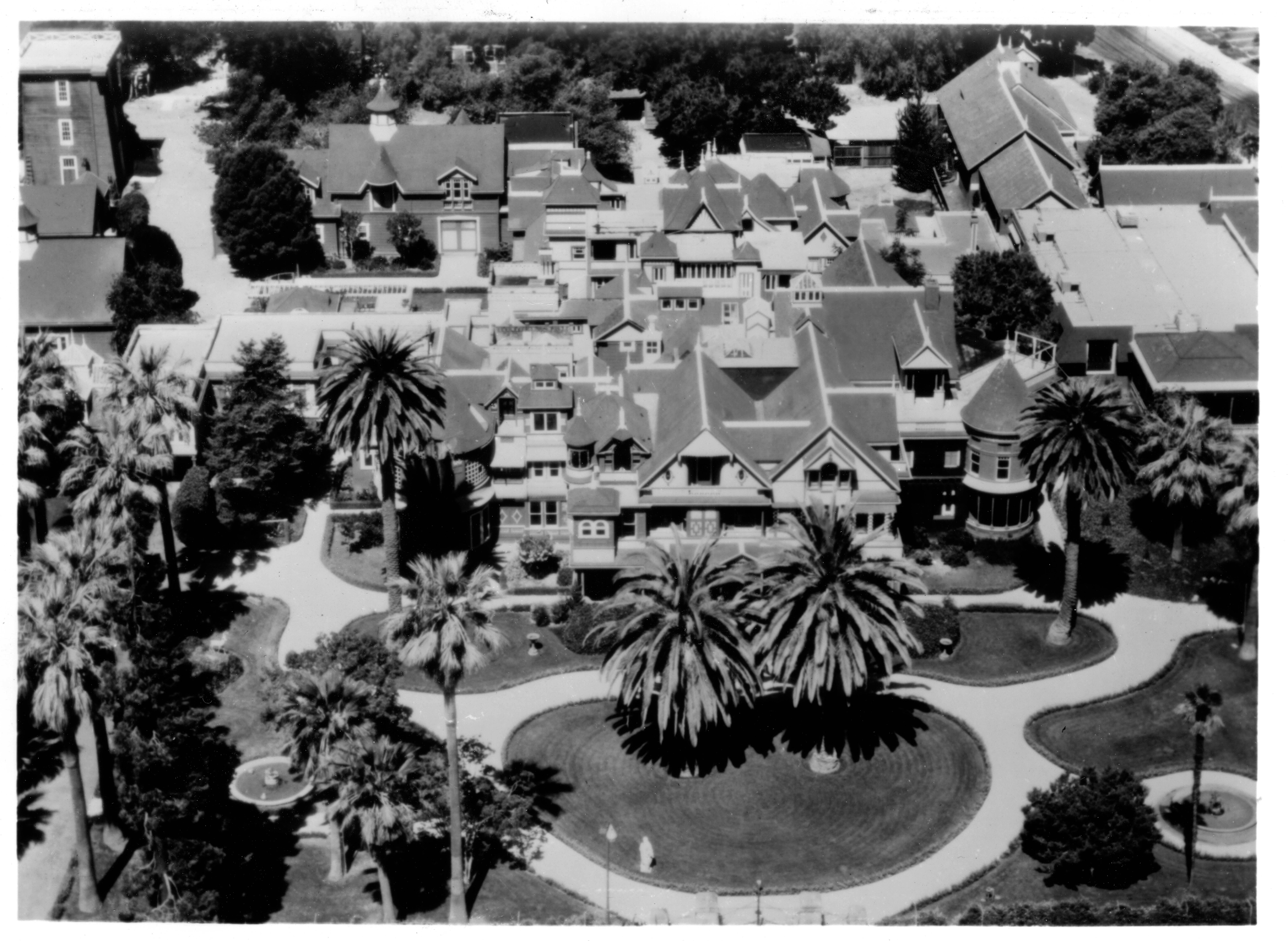 Blueprints were not used for the construction of this bizarre mansion, and no architects were consulted. As a result, doors and cabinets open to walls, chimneys stop short of the ceiling, windows look into other rooms or are placed in floors, stairways lead to the ceiling (or in some cases, to nowhere in particular), rooms are built within rooms and so on. There is even a doorway in the Séance Room that opens into an eight foot drop directly into the kitchen sink positioned in the room below.

Numerology also factors into this massive structure with 2,000 doors and more than 10,000 windows (some featuring Sarah’s preferred spider motif). For instance, the number 13 is a recurring feature in the design and decor of the house; ceilings have 13 panels, rooms have 13 windows, staircases have 13 steps, there are 13 toilets and so on.

Other design oddities include posts installed upside down and a front door without an outside door handle. According to legend, Sarah and the carpenters that installed the front doors were the only ones to ever pass through its threshold. 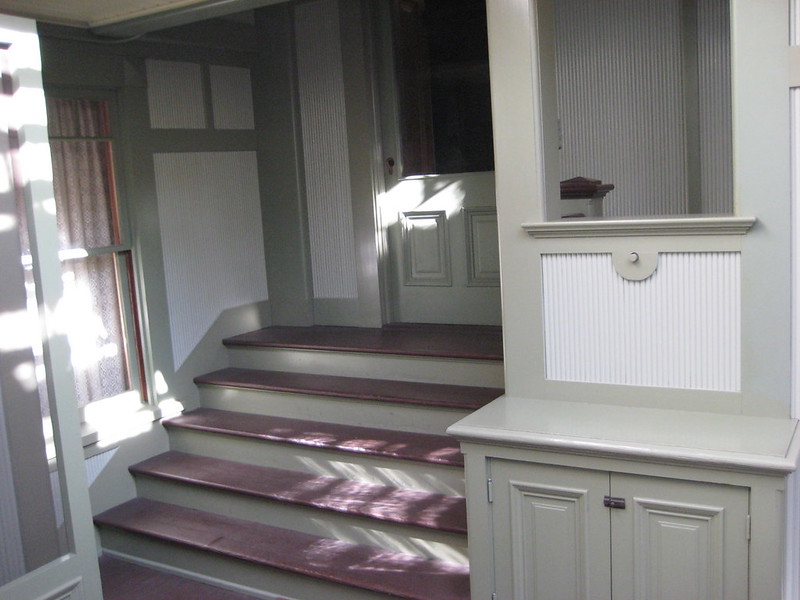 Although the continuous construction process was allegedly inspired by the medium’s message, there is also the likelihood that Sarah’s dedication to the project would guarantee company for her. It gave her the chance to interact and even collaborate on a daily basis with woodworkers, plasterers, tile setters and plumbers working on the estate.

The house once stood seven stories high, which included an impressive tower that collapsed during the San Francisco earthquake of 1906.

The compensated foundation (or floating foundation) of the house - which permits structural shifting - may have saved the house from total collapse during both the 1906 San Francisco quake and the Loma Prieta quake that took place in 1989.

The estate was built with its own water, drainage, sewer, gas, and electrical systems. There are three lifts, including an Otis electric (the first residential lift on the West Coast), one powered by a horizontal hydraulic piston and the original lift, which was originally built outside the house - but then the house grew up around it. 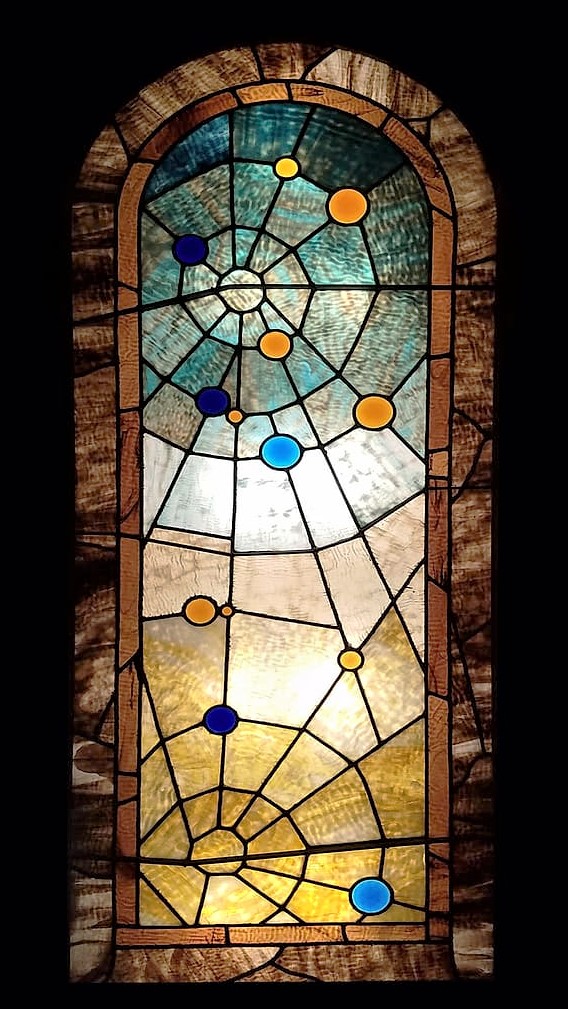 One of the spider web stained glass windows.

Many rooms in the house were boarded up after the 1906 quake, but in 2016, another room was discovered. This attic space has a pump organ, pieces of period furniture, and other items associated with sewing.

When Sarah died and construction ended, the home - which is listed on the National Register of Historic Places - was sold to private investors. It opened as a tourist attraction in 1923, and it is said to be one of the most haunted homes in America.

Work on the mansion continues in the form of restoration and refurbishment. Painting is a full time project, since it takes a year to complete the task.

Retrieved from "https://www.designingbuildings.co.uk/wiki/Winchester_House"
Create an article