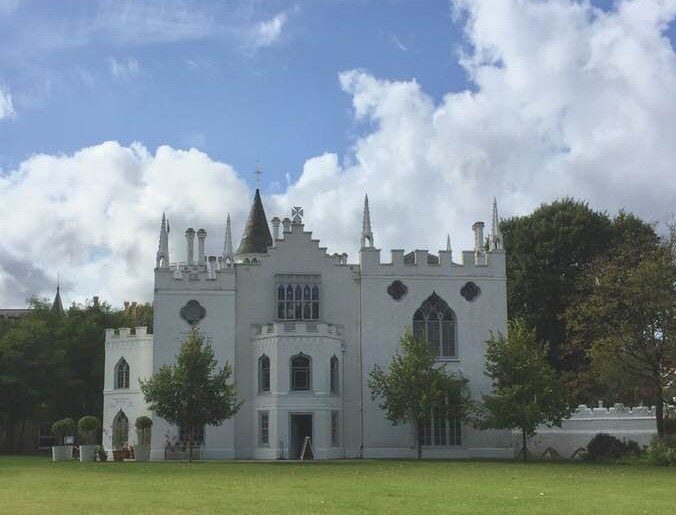 Situated just outside London in Twickenham, Strawberry Hill House is a Gothic revival style villa that was the brainchild of Horace Walpole. The youngest son of the first Prime Minister of Britain, Sir Robert Walpole, Horace spent much of his adult energy on pursuing his cultural creations - both literary and architectural - that projected a unified, nightmarish tone that would become associated with the Gothic revival movement in England.

Horace Walpole was born in 1717. He was well-educated and affluent, and as a young man he travelled throughout Europe. Accompanied on his Grand Tour by his lifelong friend and fellow Etonian, the poet Thomas Gray (author of 'Elegy Written in a Country Churchyard'), Horace observed the characteristics of mediaeval Northern European architectural cathedrals that would later inspire him. He would come to coin the phrase ‘gloomth’ to describe the sensation and would eventually incorporate that mood into his ‘little Gothic castle’ Strawberry Hill House.

How Horace became attracted to this style is unknown, although it may have simply been the dramatic contrast to Neoclassicism (the popular style at the time) that appealed to him. He may have also been inspired by the natural surroundings of the modest plot of land and small cottages he purchased for his villa in the Twickenham countryside in 1747.

Horace promptly changed the name of one of the original cottages on his newly purchased land, and Chopped Straw Hall became Strawberry Hill Shot. Work on his summer villa began soon after. The project would span from 1749 to 1777 and would attract (and infuriate) talented architects, designers and innovators willing to fulfil Walpole’s wishes.

His friends John Chute (an amateur architect) and Richard Bentley (a draughtsman and designer) formed a ‘Committee of Taste’ or the ‘Strawberry Committee’. They looked for ways to build mediaeval structures entirely from scratch. All of the designs were original - they were not resurrections or refurbishments of existing Gothic structures - and this is what distinguished Strawberry Hill House from earlier Gothic architectural revitalisations.

After an argument with Walpole, Bentley left the project in 1761, but Chute continued to concentrate his attention on the exterior of the house, with additional work by James Essex. William Robinson of the Royal Office of Works took charge of overseeing construction, which progressed through marked stages - 1749, 1760, 1772 and 1776.

Other professionals were brought in to collaborate on the interiors, reproducing architecture from around the world. The fan vaulting in the gallery is a papier-mâché creation inspired by the chapel at Westminster Abbey. Walpole’s friend Thomas Gray described the results as ‘all Gothicism, gold and looking glass’.

Wallpaper motifs were copied from Gothic stone fretwork. Chimney pieces were based on tombs in Westminster and Canterbury, and one in the Round Tower was based on the tomb of Edward the Confessor, which was later reinterpreted by Robert Adam (despite his association with Neoclassical architecture).

The property expanded over the years, although the building project had no coherent plan. Turrets and crenellated towers were added with no regard for symmetry, creating an irregular framework for an equally unconventional interior.

As the mastermind behind Strawberry Hill House, Walpole was also the author of what is often called the first Gothic novel,‘The Castle of Otranto’. Published at Strawberry Hill House on Walpole's private press, the novel’s premise allegedly came to him in a nightmare that combined medievalism and terror.

For his literary and architectural contributions, Horace Walpole is recognised as one of the primary founders of the Gothic revival style. He embraced this picturesque and romantic movement which reflected his taste for buildings inspired by mediaeval design.

This was a departure from the previous popular styles that drew inspiration from the classical forms of ancient Greece and Rome. While distinctly different, both the Gothic revival style and the Greek revival style looked to the past, and both remained popular throughout the mid 19th century.

Strawberry Hill House was visited by people of all classes and backgrounds (although children were apparently not welcome during Walpole’s time). This helped spread the popularity of the Gothic revival style. At one point, Strawberry Hill House was called the most famous house in Georgian England, although others viewed it simply a rich man’s folly.

Retrieved from "https://www.designingbuildings.co.uk/wiki/Strawberry_Hill_House"
Create an article